"It’s nice to see the world view changing and to see where MMA extends
out to. It’s opening up new doors and opening the eyes of people that
have never seen it before." - Liz Carmouche 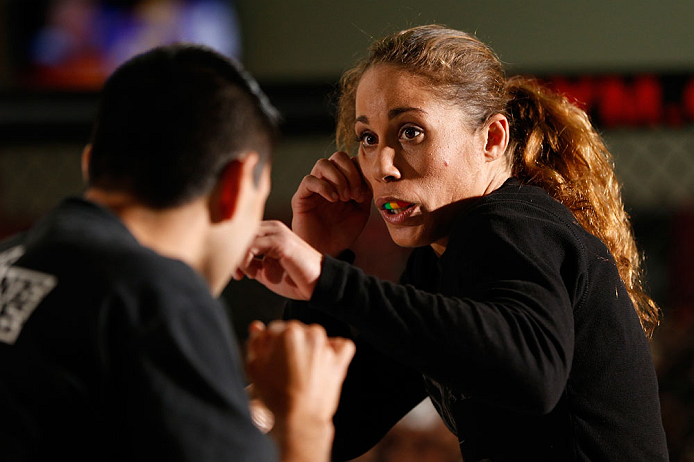 These days when you talk to UFC women’s bantamweight title challenger Liz Carmouche, you have to make it clear that you won’t be offended if she has to interrupt the conversation in order to defend an armbar.

Hey, it’s the price you pay when you’re preparing for the UFC’s first female champion, Ronda Rousey, who has ended each of her six pro bouts (as well as three amateur contests) with the maneuver.

“When I’m in the middle of talking, when I’m in the middle of instruction, or somebody’s instructing us and we’re supposed to be learning a new move, somebody will just decide to randomly try and jump my back or just try for the armbar,” laughs Carmouche, who has done pretty well so far when it comes to defending everything her teammates have thrown at her over the course of the training camp for Saturday’s UFC 157 main event in Anaheim.

“They have yet to win,” she declares, and that’s got to be a confidence booster when getting ready for the most deadly finisher in the women’s game, and possibly all of MMA. But at the same time, there is the possibility of Rousey showing up and looking to display different aspects of her game, something Carmouche is well aware of.

But she’s still expecting the armbar.

Carmouche laughs, at ease in the midst of what has been a media whirlwind ever since it was announced that the ladies would be competing in the UFC Octagon for this first time. As a United States Marine Corps that served three tours of duty in Iraq, you would figure that a few dozen or more interviews wouldn’t be an issue for her, but it is a different kind of pressure, one that can throw a fighter off her game if she’s not ready for it. So to see Carmouche handling her time in the spotlight so well is a good sign.

“I’m definitely coping with it,” she said. “It’s a huge thing for me to have to allot a specific amount of time every day to do media, but it’s nice to see the world view changing and to see where MMA extends out to. It’s opening up new doors and opening the eyes of people that have never seen it before.”

It’s been a whirlwind many weren’t expecting, but Carmouche always had high hopes once she got in the sport that she would be competing against the best on the biggest possible stage. Even when she made her first big move into Strikeforce, she talked about how cool it would be to one day fight in the UFC as well. Turns out she was a prophet, though you won’t hear her say that.

Even if that dream hasn’t truly hit her yet.

“It still hasn’t even sunk in,” she said. “Until I see a little Liz figurine that says “UFC” on it, I won’t believe it.”

She laughs, but that kind of stuff may be materializing sooner rather than later if things keep going the way they do. Back when Carmouche got out of the military and into the gym, she wasn’t even aware that female fighters were being put on legitimate sanctioned cards around the United States and the world.

“When I first started getting into MMA, it was something that I wasn’t really aware of,” she said. “I was told that there was only underground fighting for women in MMA, so I totally get it when people don’t understand. I know I kinda live in my own little world and don’t know what’s going on outside of it (Laughs), so I can totally understand how people would have no clue about women’s MMA and combat sports.”

They know now though, and if they don’t, Carmouche and Rousey have done whatever it’s taken for them to get up to speed on the sport. It’s a job that male fighters really haven’t had to deal with since the early days of the MMA explosion in 2005, but the two main eventers have taken the task on willingly, and as far as Carmouche is concerned, if there’s some young girl out there who looks at her and Rousey and decides that she wants to hit the gym or chase after a different dream, that’s just fine with her.

“It’s not a pressure at all,” said Carmouche. “It’s a gift to be put in that position to be a role model for anyone. And I embrace it, I look forward to it, and I think that it’s amazing that I’ve come so far to a point where I can even be a role model for someone. So I’m embracing it and I’m grateful for the opportunity.”

But back to that armbar, a weapon that Carmouche respects, but doesn’t fear, and one that she feels she has the tools to combat.

“She (Rousey) has years of experience and she’s been training since she was a kid, but I’m fortunate enough that I’m a very quick learner,” said the San Diegan. “I’ve been doing this for a very short time, especially in comparison to how long she’s been training for judo and armbars, but I’m a well-rounded fighter and that really plays to my advantage.”

If she does take the fight out of the first round, something no one has ever done with Rousey, it’s all of a sudden a brand new fight, one Carmouche knows all about, having gone into the fourth round with Marloes Coenen in their 2011 Strikeforce championship fight.

“I think it gives me a huge advantage because I know what it’s like to go almost into the end of the fourth round in a championship bout with all that pressure on you, and to have the energy to do so,” said Carmouche. “If for no other reason than it’s a mind game. So if you can make it past the first round, it just changes everything, and I know for sure it goes to my advantage and it will play out for me.”

And if you haven’t seen the 29-year-old in action since her three round decision loss to Sarah Kaufman in Strikeforce in 2011, get ready to see a new and improved version of the “Girlrilla” on Saturday night.

“I’ve changed tremendously,” she said. “Everybody has their off day and that’s what the Kaufman fight was for me. I wasn’t there for that fight and since then I’ve made sure that that never happens again and that I come in full force and there are no more off days. And I made sure that through every fight, whatever mistakes I made, whether I come out with a win or a loss, that I’m learning from them and making changes to my game and my style and I do so with every fight. The Coenen and Kaufman fights just made me jump really forward in my game and progress that much faster. I was taking little steps before, and those ones made huge corrections in my game that really helped me knock out those two wins after, and it made me develop so much mentally and physically.”

2-0 with finishes of Ashleigh Curry (TKO) and Kaitlin Young (Submission) since the Kaufman fight, Carmouche is hitting her stride at the perfect time, and she’s confident of pulling off the upset on Saturday night. If she does, you have to ask, how do you top that?

“You find somebody else,” she said. “You find more women and you help build a division. That’s ultimately what we want out of this. We want to build the 135-pound division and make this a real sport for women and show that’s what it is. And it’s what I hope this championship fight will do and the win will do.”