"Experience always plays an important role, but so does heart and so
does being young and sprite. I don’t think her lack of
experience is going to play a part in this at all." - Liz Carmouche 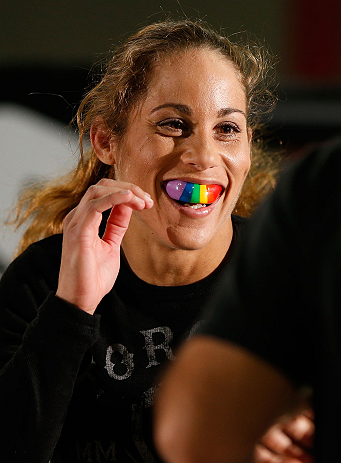 After surviving the whirlwind that was her historic UFC debut against Ronda Rousey in February, you would assume that things have calmed down considerably for Liz Carmouche when it comes to Octagon bout number two against Jessica Andrade this Saturday in Seattle. Not so, says the bantamweight contender.

“I wouldn’t say that at all. Certainly there’s a lot less publicity, but my responsibilities at the gym have changed a little bit, and now my girlfriend works, so she’s not at my beck and call to make my food (laughs). So it’s a little bit more stressful with a little bit more going on.”

Well, at least she doesn’t have video cameras documenting her every step like last time, right?

“I wouldn’t say every step, but there’s still been a camera crew in here at least once a week.”

It makes sense. Despite her loss to Rousey in the UFC 157 main event, which marked the first women’s fight in UFC history, Carmouche - who almost finished the champion early on - didn’t see her stock drop at all. Well, at least not with 98 percent of the public.

“I would say 98 percent of the people were impressed and blown away by the performance that both of us put on, both in the almost upset and just in the fact of what they got to see of women’s MMA, and what we did representing for women in general in the UFC and MMA,” she said. “There were some skeptical people who said I got what I deserved and I had it coming, but the majority of people were super supportive and still have been to this day.”

Well, there will always be those two percent. Carmouche doesn’t let that bother her though, especially not when she has already made an impact as a role model that will last a lot longer than the memory of a loss in a prizefight. And while some shy away from being an example for others, it’s not just something the 29-year-old Californian embraces, but something she always wanted to be.

Of course some would call her day job “crazy stuff,” but again, it’s not something she gives a second thought to, as this United States Marine Corps veteran has always followed her own path. Currently, that path leads through the bantamweight division, and more immediately, through Brazilian rookie Andrade, a relative unknown with upset on her mind.

“As far as in the US, she’s unknown and coming in under the radar, and that makes for a dangerous opponent,” said Carmouche. “It’s the same thing that happened with me. Nobody knew who I was, so nobody knew what to expect and they expected nothing of me, so you can come in that much stronger and dominate. So I know where she’s coming from, and that’s not an opportunity I’m going to give her. And she’s 9-2, so she’s by no means an underdog coming into this and she’s by no means inexperienced. She’s a veteran fighter; it just happened to be in another country, so people over here aren’t too familiar with her. I’ve had a good opportunity to study her videos and she’s a little powerhouse. She’s gonna be a good one for this fight.”

Andrade has talent, that’s undeniable. But when it comes to experience, Carmouche’s battles with Rousey, Marloes Coenen, Sarah Kaufman, Jan Finney, and Kaitlin Young, give her a sizeable advantage on paper. Carmouche says it’s just that – an edge on paper.

“Experience always plays an important role, but so does heart and so does being young and sprite,” she said. I don’t think her lack of experience is going to play a part in this at all.”

If you’ve talked to Carmouche or followed her career for any length of time, this is par for the course. She’s humble to a fault, respectful, and not one to make excuses. So when you ask her if all the pre-fight media obligations affected her performance against Rousey, the answer is one you don’t receive from too many people, but one you almost expect from her.

“I don’t think it affected anything on fight night,” she said. “I honestly feel like we were able to manage everything correctly. I had a specific time slot for that (media obligations), and I’m really good at adjusting and growing to what the expectations are that are needed. I don’t feel like it affected me on fight night, but who can say that it didn’t. If we had to go back in time and take out all of those events and just go straight into the fight, there’s no way of telling whether or not it would have been a different result.”

And unfortunately time travel hasn’t been invented yet.

Without time travel, Carmouche has business to take care of before she can start ringing the bell for another title shot, but she knows that a statement-making win on FOX this weekend could speed up that process.

“That’s certainly my hope, but I don’t like to look past my opponent,” she said. “I have to first make it successfully through this one before I can ever move on. But my hope is that after this fight and I get the win, I can move on to be a contender for the belt again.”

In the meantime, it’s business as usual for Carmouche, who is not just defending random armbars in the gym these days, but everything her teammates can throw at her.

“Now I get random kicks, random attacks, people going for everything,” she laughs. “One of our training partners, he’s like 6-5, 225, he randomly decides out of nowhere to dive at me, and as big as he is, he can just squeeze me into a teeny tiny little ball. So he’ll jump on my back and go for anything and everything or jump out from behind a wall and punch me or kick me. It keeps me on my toes for sure.”