Livinha Souza at beginning of a promising journey in the UFC 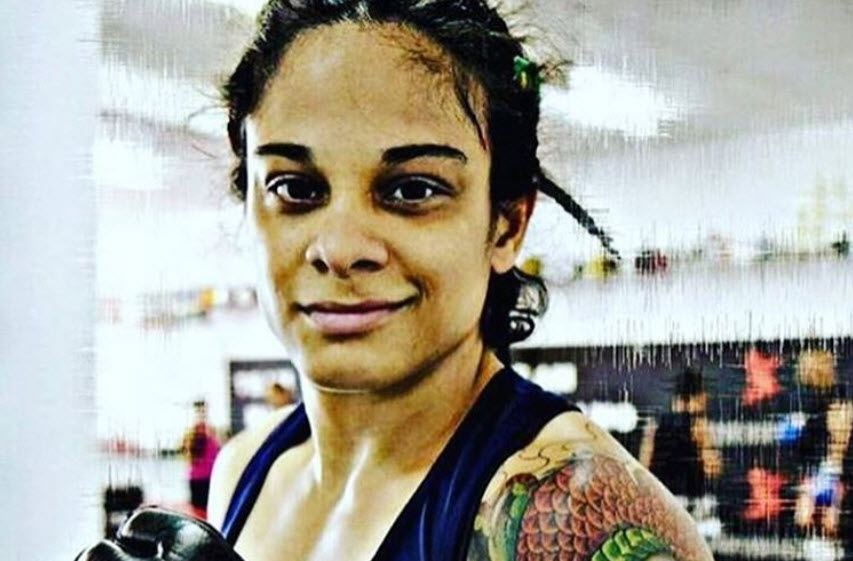 As a former Invicta FC strawweight champion who has won 11 of her 12 pro bouts, Livinha Souza is expected to be in the running for a world title in the UFC as soon as she steps foot in the Octagon to face Alex Chambers this Saturday in Sao Paulo.

But Souza is not making such bold proclamations. Not yet.

“I think that you only can be considered a future world champion after I beat a top five (contender) and win well,” said Souza through a translator. “Until then, I keep my mentality that I am only at the beginning and I will keep proving to myself and to everybody else that there is no limit on how far I can go.”

Anyone who has seen her fight will agree that the sky is the limit on what the 27-year-old can do in this sport, and high expectations are on her shoulders as she approaches her UFC debut, one delayed from February, when an injury forced her out of a matchup with Jessica Aguilar.

“There is no pressure,” Souza said. “I keep my focus on doing a good camp and staying healthy to do my best always. If I felt pressure I wouldn't be in the UFC. There is zero pressure for me. I am very happy to be able to make some fans enjoy my fights and I will show my work as I've always shown it (in order) to have a big history in the organization.”

A pro since 2013, Souza raced out to a 7-0 record on the local scene in her native Sao Paulo before signing with Invicta in 2015. In her first fight there, she won the strawweight title, submitting Katja Kankaanpaa. We call that making an entrance. When asked what she learned from her time in the promotion, she said, “I learned to deal with all the atmosphere of a big international event, something we don't have in Brazilian MMA. I also learned to be more professional and to be more open to the fans.”

Those fans embraced her, and by the time her time in the promotion was over, she compiled a 4-1 record with three finishes and two Performance of the Night bonuses. The only loss? A five-round split decision defeat to another current member of the UFC roster, Angela Hill. So, is “Overkill” on the radar of the “Brazilian Gangsta” now that they’re both fighting in the Octagon now?

“It isn't because I don't think of that fight as a rematch because I won that fight,” said Souza. “Everybody saw it except for two judges. Anyone that wants to see it again can just watch it on (UFC) Fight Pass. If I ever fought her again it would be a normal fight for me, and I have no problems fighting her again. My goal in the UFC is to make bigger fights, and if she is in the way, I will put her in my pocket, no problem.”

MORE SAO PAULO: On The Rise | Fight by Fight Preview

Needless to say, it’s the present and future that motivates Souza, but having come up the hard way in the sport and in life, she clearly draws from those tough moments to get her through the same moments in fights. The toughest? Fighting Janaisa Morandin in August 2017, less than three weeks after her father passed away.

“For me, the roughest days of my life and career were after the death of my father, 19 days before my last fight,” Souza said. “I found myself between the cross and the sword. If I won, it was the least I could do for his memory, and if I lost I wouldn't be able to use it as an excuse, even though it really hurt me and messed me up. But I was able to prove that I was born for this and that my mind is very strong. In the war, you have collateral effects and, unfortunately, losing my father was a tough blow for my life, but us that are alive have to fight for the memory of our loved ones who aren't here anymore and I will keep fighting for his name.”

If you don’t already like Livinha Souza, this should make you want to root for her. Want more? She also came in fifth place in the Sao Paulo State hot dog eating contest, finishing off 12 hot dogs in the process. Not bad for a 115-pounder.

Speaking of 115 pounds, Souza believes that she has landed in the best division for the ladies in the UFC, and she’s willing to do whatever it takes to sail to the top of the strawweight class.

“I think it is, by far, the best female UFC division,” she said. “I am very proud to be competing in it. I will fight any girl in that division and any fight that the UFC wants me to do, I am ready to do it. Short notice, filling in for an injured fighter, it doesn't matter. I think that if you are not ready to fight at any time, you are not worthy to be in the UFC.”

If she sounds excited to be here, that may be an understatement for a fighter whose dream was always to compete in the UFC.

“UFC was always the goal for my life, for sure,” Souza said. “It was always my target and I think that the contract came at the right time in a certain way because nowadays I feel much more ready to face the top fighters of the world compared to the time that I first thought about signing here. But I have been ready for a while. I won big fights and I am used to fighting on big stages.”

It is key to point out that when Souza turned pro, it was just a month after Ronda Rousey and Liz Carmouche introduced women’s MMA to the promotion, and it would take even more time before fighters like Cris Cyborg, Amanda Nunes, Jessica Andrade and Claudia Gadelha put the Brazilian ladies on the UFC map. But Souza always felt that there was a place for her and her peers in this world, and she embraced that opportunity.

“I think that even when the scene was smaller, girls already had their space, and now thanks to several pioneers of the sport, it is getting better and better,” she said. “So we all have to thank girls like Jessica Aguilar, someone I respect a lot and who I almost fought. I really want to fight her because she is an icon. We also have to thank Ronda, Miesha (Tate) and Cris Cyborg, who is a legend that I had the pleasure of sharing a locker room with in Invicta. My biggest difficulty in the early days was getting fights because there were fewer girls fighting, but I think that nowadays we have more girls and more talent.”

Add Livinha Souza’s name to the list of UFC talents, and she can’t wait to show what she can do in the Octagon.

“The fans can expect me to always represent my ghetto,” she said. “I will represent the people who are near me, who help me and everyone that came from the ghetto and the favelas, the people who live a hard life every day and have won in life. I will always look to do my best to treat the fans well because I am a fan too, and every time an idol was nice to me it made me very happy and it only made me more and more hungry to arrive where I am today. They also can expect me to give my everything inside the Octagon.”