In front of a sold out crowd at Arena da Baixada in Curitiba, Brazil, No. 10-ranked light heavyweight contender Rogerio Nogueira thrilled his home country fans with a first-round knockout of Pat Cummins in a UFC 198 preliminary bout on Saturday.

Cummins did a good job of keeping Nogueira from getting his striking game in gear as the fight began, but the Brazilian got into a rhythm soon enough, tagging his foe repeatedly midway through the round. Cummins got back in gear and started working his kicks again, bruising his foe’s leg. But “Lil’ Nog” wouldn’t stop coming forward, and after stunning Cummins with a right hand, it was the beginning of the end, with a barrage of follow-up shots on the ground and feet prompting referee Leon Roberts to step in at the 4:52 mark. 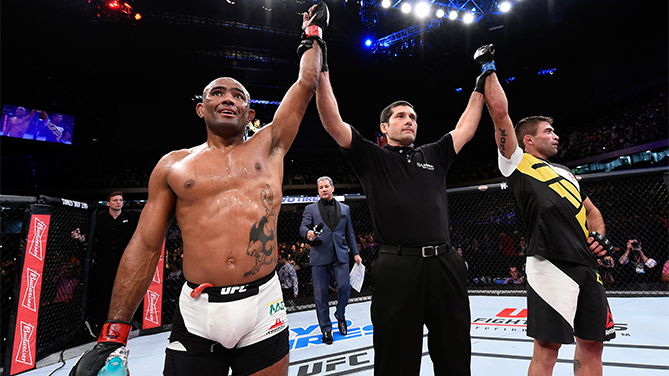 In a clash of Curitiba welterweights, veteran Sergio Moraes rose from two first-round knockdowns against short-notice debutant Luan Chagas to escape with a three-round draw.

Chagas didn’t stray from his usual aggressive attack in his Octagon debut, as he fired off hard kicks upstairs and down, and with less than 90 seconds left, the newcomer blasted Moraes with a head kick that dropped him hard. Moraes recovered quickly, but he visited the mat a few moments later after a straight left to the head, capping off a big round for Chagas

In the second, Moraes (10-3-1) got back in the game with a guillotine choke attempt that nearly finished the fight, and when that came up short, he went back to work from the bottom position until referee Osiris Maia restarted the action with a minute left. Moraes did get the fight back to the ground though, finishing the stanza strong.

Moraes continued to press the action in the final stanza, focusing on his ground game, and while Chagas’ defense was solid, he was not able to put together the offense needed to pull out the victory. The 22-year-old, who replaced the injured Kamaru Usman on two weeks’ notice, will instead have to be content with the draw verdict, which leaves his record at 14-1-1 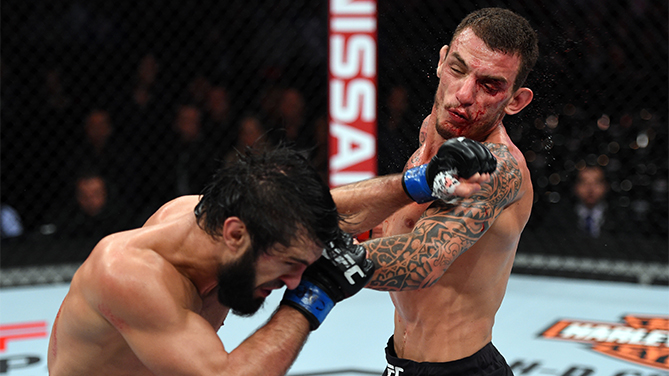 Brasilia’s Renato Moicano got the night off to a good start for the Brazilian contingent, winning a three-round split decision over Zubaira Tukhugov in a meeting of featherweight prospects.

A slow first round heated up in the final minute, with Moicano working his ground game effectively from the bottom position as he sought out submissions against the aggressive Tukhugov.

The second remained standing, both fighters having their moments in a competitive frame Moicano (10-0-1) might have stolen with a late surge.

Tukhugov (18-4) cut Moicano over the left eye in the final stanza, prompting a visit from the Octagonside physician, but after being cleared to continue, the Brazilian marched forward in an attempt to make an impression on the judges, and he did, taking the decision by scores of 29-28 twice and 28-29.