Listen Up, Edward Faaloloto Has Something to Say

“I have every intention of making this a very exciting fight. Terry Etim has been out for over a year, but I don’t expect him to be rusty at all." - Edward Faaloloto 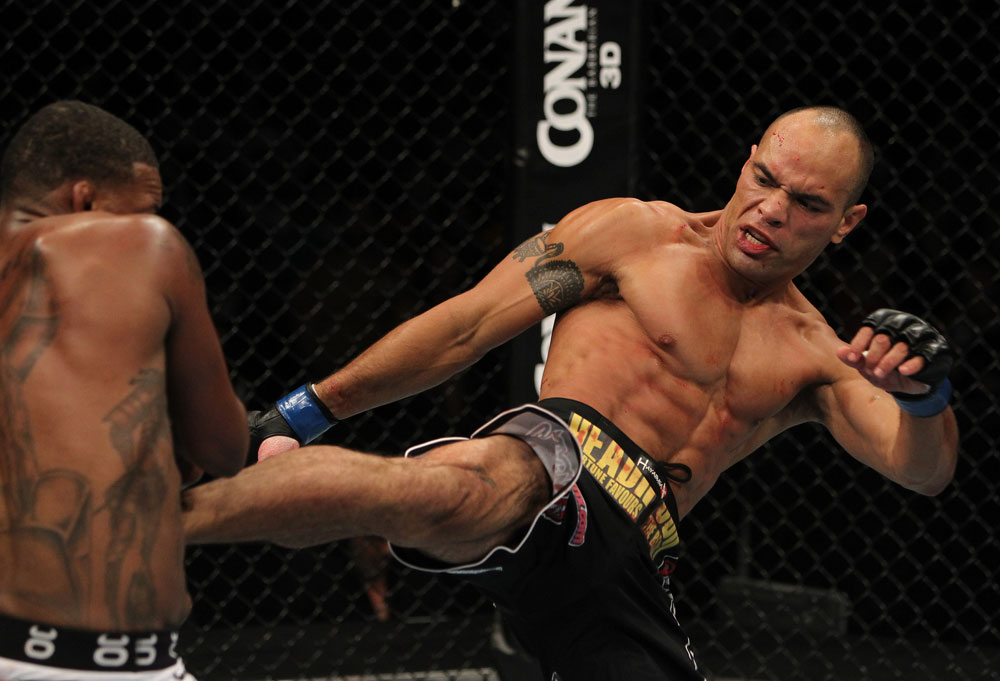 Every second counts. Not just in the Octagon, where lightweight Edward Faaloloto will be looking for his first UFC win on Saturday against Terry Etim, but in life, where the Hawaiian has earned a black belt in the art of time management.

See, while other fighters used the long plane ride to Birmingham, England to catch up on their rest before this weekend’s UFC 138 card, Faaloloto took the opportunity to catch up on his homework, as the full-time mixed martial artist is also a full-time student at Kapi’olani Community College in Honolulu, a juggling act he says he manages “The best I can.”

“It’s not easy,” he continues, “but thankfully, I’ve got an awesome gym and awesome professors, so they understand that I’m fighting right now and trying to squeeze everything in between. During this camp, I had to leave to San Diego to train at Alliance Gym for three weeks, so I told the professors and they knew what was going on, so they let me hold all my work until I got back.”

And after knocking out what work he can while traveling the friendly skies, the English major will then focus on knocking out returning Terry Etim this weekend in a main card bout that will put the spotlight on Faaloloto like never before. It’s just another moment in a whirlwind year that has taken the 27-year old’s life on a crazy new turn.

Finishing up his service with the United States Navy last year, Faaloloto got a late notice call to face Anthony Njokuani in a November 2010 WEC bout, and suddenly everything changed for him.

“To be honest, MMA started off as just my hobby,” he said. “I was always a student; I was in the military, and I fought a little bit while I was there, but it could only be my hobby then because my job was full-time. But I decided to get out, and then the opportunity for the WEC popped up and I jumped on it. It’s been a dream.”

The hard-hitting Njokuani shook Faaloloto out of that dream for a moment with a second round knockout, but given his lack of experience and the short notice of the fight, it was an explainable loss, not that Faaloloto is looking for excuses.

“I don’t want to make excuses or take anything away from Njokuani, he’s an awesome fighter, and the fact is, he won that fight, so I want to make that clear,” he said. “If I were to honestly look at it, I just got out of the military and that (getting the fight) was a surprise. It was kinda short notice, and at the time there were a lot of things that weren’t going right. But ultimately, I just blame my inexperience. As bad as I want it and as hard as I’m working, I’m still behind the bar when it comes down to putting in the hours in the cage, and I think that’s been the biggest factor in my fighting. I can improve my standup, ground, cardio, and mind the best I can, but ultimately, I still have to clock in those hours.”

Faaloloto (5-2) suffered a second straight defeat when Ultimate Fighter 12 finalist Michael Johnson stopped him in the first round of their June UFC live bout, but like all Hawaiian fighters, he’s not going away without a fight.

“I wouldn’t train as hard as I am, and I wouldn’t put myself through this if I really didn’t want to fight in the UFC,” he said. “I really, really want this, and I do want to pursue MMA, and my hobby is my life now. So I have every intention of getting better and working my way up there. My goal is to go in there, make a statement and move on up.”

It’s a tough mountain to climb, especially when he’s giving up a significant amount of experience to the talented Etim, but with one punch stopping power and the grit that comes with a life spent fighting for every inch you got, Faaloloto has the intangibles that make him a live underdog against anyone he faces.

“During training, when I have to write that 10 page paper that’s due tomorrow morning and still have to go to the gym and put in three hours of work, that’s what I think about,” said Faaloloto, who was raised by his grandparents and hanging with the wrong crowd before discovering martial arts as a teenager. “I look back at my past and see where I’m at now when I feel like complaining or feel like taking time off. I can’t stay still, I can’t be stagnant, because life will pass me by. And it’s in those moments that I look back.”

He also wants to set an example for his daughter.

“I want her to know that if you really, really want something, regardless of how hard it may be or all the circumstances that may come your way, you have to go get it, and that’s what it comes down to.”

That kind of motivation can make a fighter very dangerous when the bell rings, and Faaloloto expects to bring it to Etim on Saturday.

“I have every intention of making this a very exciting fight,” he said. “Terry Etim has been out for over a year, but I don’t expect him to be rusty at all. I do plan on giving him a nice big welcome though. And my gameplan when I come at Terry Etim is to make more of a statement to reestablish myself to everyone else.”

And with a resounding win on the UFC 138 main card that will be seen around the world, Faaloloto can erase the memory of his two losses in 15 minutes or less. That’s precisely the idea, he says.

“Everything is working out in such a way that this is the culmination of it. I had no idea I was gonna fight in England, and now I’m on the main card. The universe is speaking, and I have something to say.”