It has been four weeks since the UFC has had a fight and Brian Kelleher is as eager as anyone to start 2022 off with some exciting fights.

“I watch every card so, for me, I was like, ‘Man I miss these fights’ and then I’m starting off the year, so I had a lot of anticipation,” Kelleher said. “I knew this was coming up, first fight to start the new year, so I am excited for it.”

Kelleher’s Saturday night highlights include watching fights and grubbing on some bar food, that is when he isn’t six weeks or less out from a fight. And while cutting out some things around the holidays isn’t always ideal, Kelleher is used to it. The 35-year-old is heading into his 36th professional fight, so he knows a thing or two about preparation.

He has fluctuated between bantamweight and featherweight throughout his career and recently went back to 135 pounds in August, defeating Domingo Pilarte by unanimous decision. Kelleher was originally slated to face Saidyokub Kakhramonov this weekend, but had a late opponent change, moving the fight up to featherweight.

It doesn’t matter which weight class he is in; “Boom” feels confident. 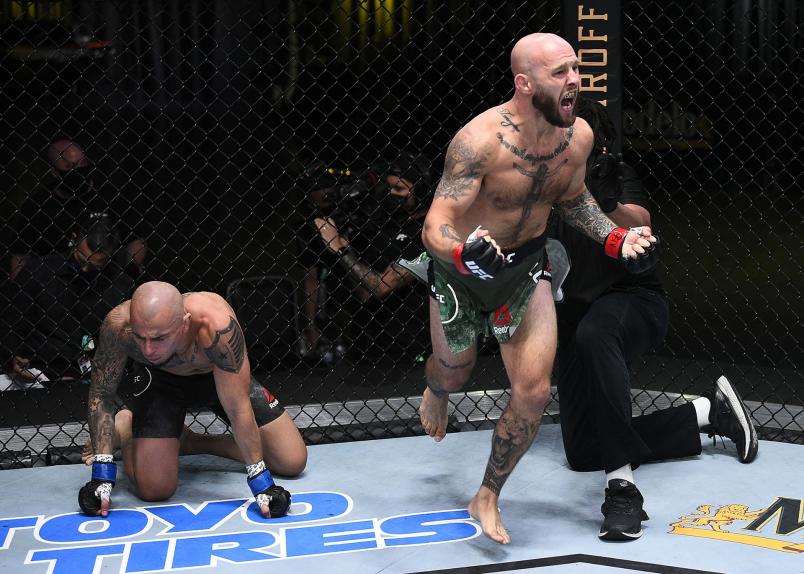 Brian Kelleher celebrates after his victory over Ray Rodriguez in a featherweight fight during the UFC Fight Night event at UFC APEX on September 05, 2020 in Las Vegas, Nevada. (Photo by Chris Unger/Zuffa LLC)

“Coming off a win is always good; I have momentum behind me, so I feel good about that,” Kelleher said. “Being back at bantamweight, cutting weight sucks, I never like it, but, at the same time, it’s like the fight before the fight. If you get through it, you kind of revive yourself and get back to your normal self. It feels more normal because I’ve done it my whole career.”

His new opponent, Kevin Croom, steps into the Octagon for only the third time in his career. Since joining the UFC in 2020, Croom has recorded one no contest and one defeat, against Roosevelt Roberts and Alex Caceres, respectively.

So, UFC experience is a factor that could be on Kelleher’s side come Saturday night.

“I’ve had a lot of experience, not only in MMA, but in the UFC. Being here, the bright lights, everything, you feel that stuff but, for me, it’s normal, natural and just another day at the office, another fight.”

Since making his debut back in 2017 against Marlon “Chito” Vera, Kelleher has had a mixed bag of results, racking up a 6-5 record. He has faced a variety of talent in the past couple years and heading into this weekend he just wants to be fearless and be the veteran that he is. 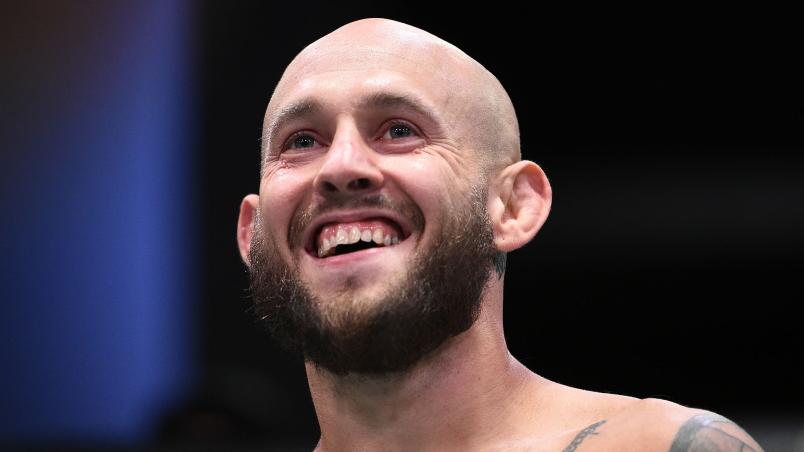 Brian Kelleher celebrates after his victory over Ray Rodriguez in a featherweight fight during the UFC Fight Night event at UFC APEX on September 05, 2020 in Las Vegas, Nevada. (Photo by Chris Unger/Zuffa LLC)

“They’re feeding me these younger guys and testing me, seeing if I still belong, and I feel great at my age,” Kelleher said. “I’m a veteran in the sport. I feel young still. I feel good and it motivates me to fight guys that are coming up, trying to steal my spot.”

Saturday’s bout will be Kelleher’s fifth inside the APEX, so he is no stranger to the smaller atmosphere that comes along with fighting there. Kelleher misses fighting in front of large arena crowds, but he still values the noise even small crowds at the APEX deliver.
“Walking out here (the APEX) there are some pros and cons, and it’s a little calmer,” Kelleher said. “It feels like a sparring session, like you are in the gym, but the electric energy of the fans, there’s nothing like that and I feed off that. If I am in a fight and I hear the roar from the crowd, that gives me energy to push a little bit harder, so I do miss that, but I’m used to this at this point. It’s cool to have some people in attendance to watch, a little noise.”

When he pictures the rest of 2022, Kelleher hopes to fight four times, which wouldn’t be unusual for him after fighting four times in 2020. Like many fighters, staying active is important for Kelleher and he is ready to fight whenever, wherever.

“There are no real camps for me; it’s my lifestyle, so if I can fight at ‘45 on a short notice call, and I’m down for two weeks’ notice, three weeks. I don’t mind. Staying active is important to me. I love the feeling of momentum and familiarity; being here and doing this, it makes it easier each time and more comfortable.”