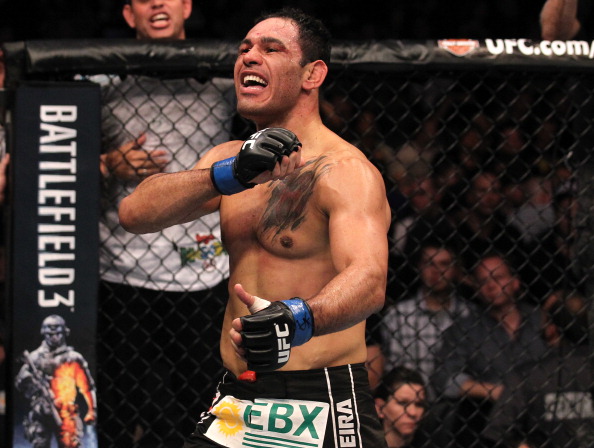 Despite being twin brothers, Rogerio Nogueira has almost always had to be the first one into the ring or Octagon when fighting on the same card as former PRIDE and UFC heavyweight champion Rodrigo “Minotauro” Nogueira. Not anymore, as he gets the UFC 190 co-main event slot on Saturday while his brother fights earlier on the main card against Stefan Struve.

So did Lil' Nog give his sibling a hard time about being the last brother to fight this weekend?

“It’s funny,” he laughs. “But it’s also a good opportunity.”

This may be the best opportunity of Nogueira’s nearly six-year UFC run, a chance to run back a fight that happened ten years ago against Mauricio “Shogun” Rua.

“It (the first fight with Rua) was a tough fight, it was a war, and a good challenge for me,” he said. “I know he had a good chin and moved fast, so I pushed a lot. It was a good matchup.”

To most MMA fans who were following the sport back then, it was a lot more than that. Nogueira and Rua were part of a tournament in Japan’s PRIDE organization that included Quinton “Rampage” Jackson, Dan Henderson, Vitor Belfort, Igor Vovchanchyn, Alistair Overeem, Wanderlei Silva, Kevin Randleman, Ricardo Arona and Kazushi Sakuraba among its 16 participants. In the quarterfinals on June 26, 2005, Nogueira and Rua met, and for three rounds, the best parts of MMA were all on display before Rua took the decision and eventually the Grand Prix tournament title.

If you were listing the best fights in PRIDE history, this would be in the top five. The best fights in MMA history? Same thing. It was that good. So to say expectations are high for more of the same a decade later would be an understatement, and despite the time passed, there is the feeling that whenever these two Brazilian stars meet, magic will happen.

“People expect a lot from this fight,” Nogueira said. “It was one of the best fights in 2005 in PRIDE, and they say it was one of my best fights. Shogun has had many good wars in the UFC, like against Dan Henderson, and this is going to be a very good fight, a very exciting fight.”

If getting the chance to even the score with Rua in this friendly rivalry isn’t enough, Saturday’s bout will be the 39-year-old’s first in Brazil since 2009, and first ever in his adopted hometown of Rio de Janeiro. That’s a pretty remarkable stat for someone who has competed in 27 pro fights over nearly 15 years in the sport.

As excited as fighting with his brother on the same card for the first time since UFC 140 in December of 2011?

“He’s going to fight first, then after him, I’m going to fight, so I hope he fights very well to motivate me more to win this fight.”

He laughs. No pressure then?