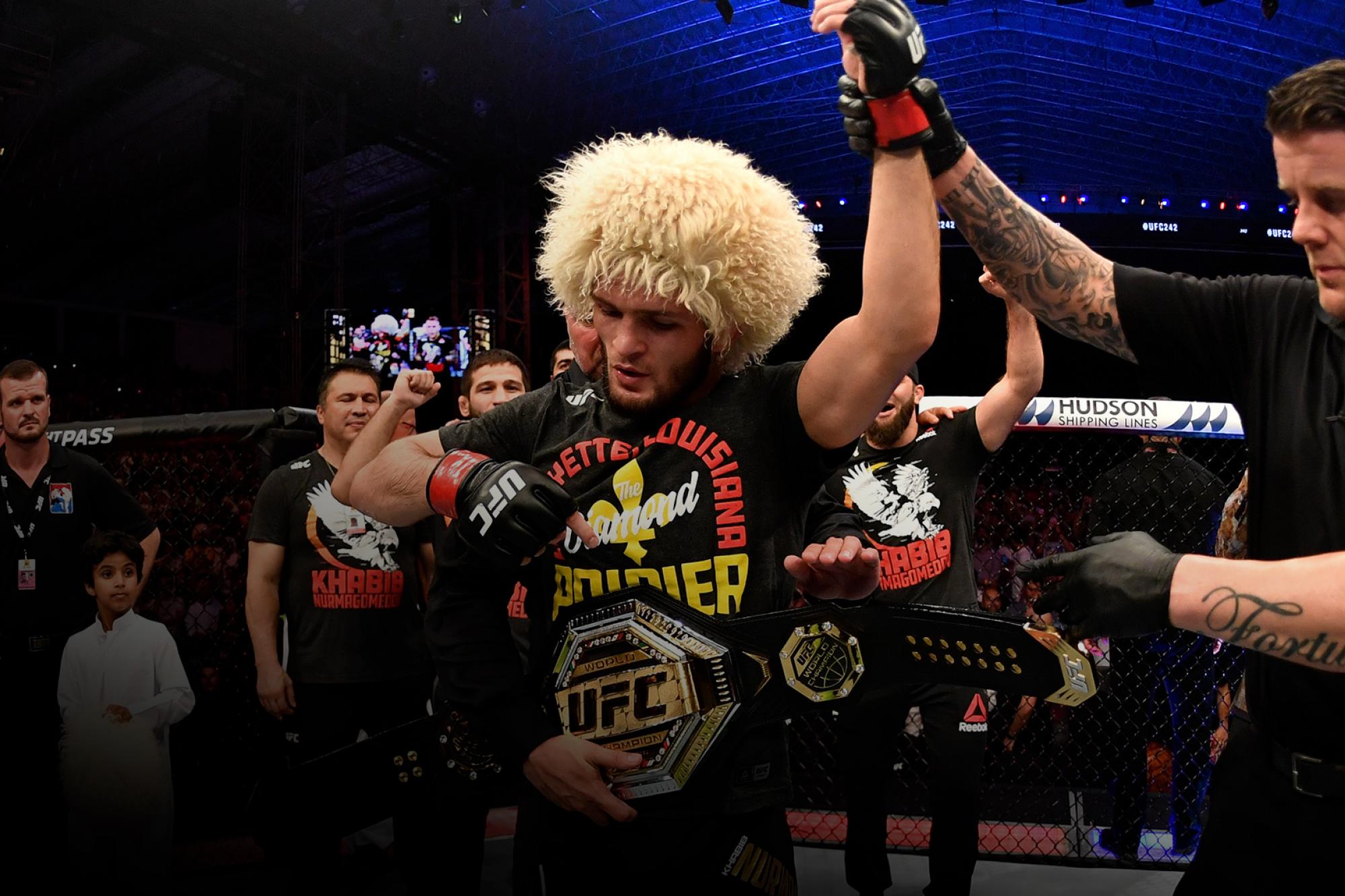 Where We Stand: Lightweight Division

Few divisions are as saturated with talent as lightweight, where the untouched Khabib Nurmagomedov stands above all.
By Zac Pacleb, on Twitter @ZacPacleb • Apr. 5, 2020

Oh, the lightweight division. There might not be a division more saturated with storylines, drama and downright iconic fighters jockeying for a place at the top. Three of the top 5 contenders have held some form of UFC gold at one point or another, and the other two are either on their way or at least soon deserving of their chance. However, there’s plenty of business to be taken care of before they get their shot.

Khabib Nurmagomedov is as dominant a fighter as anyone has seen inside the Octagon, and yet, Tony Ferguson is on a uniquely dominant run himself, and that fight continues to elude everyone. On top of that, Conor McGregor looked rejuvenated and refocused against Donald Cerrone and is eager to make up for his submission loss to Nurmagomedov. Meanwhile, Justin Gaethje is as entertaining a fighter as anyone has seen, with a wrestling pedigree that makes a matchup with Nurmagomedov extremely interesting. Dan Hooker is on a run to establish himself as the new lightweight in the mix, calling out Dustin Poirier, who is as experienced and dangerous as anyone. It's a beautiful, chaotic storm.

So, with that, let’s take a look at the stacked lightweight division:

Outlook: Mauling. Dominant. Terrifying. Any aggressive-sounding adjective is appropriate when describing Khabib Nurmagomedov’s presence and style in the Octagon. He hasn’t found an opponent to match his relentless pace, regardless of whether they can stay with him in the world of grappling. Only Conor McGregor can claim to have won a round against him, but even then, Nurmagomedov dispatched of the Irish superstar shortly after in the fourth round. Against Dustin Poirier, it looked exactly like every other one of his fights, just turned up a little more. With each bout, Nurmagomedov shows an improved standup game and ability to push his opponent to the cage before bringing them down rather than taking naked shots in the middle of the Octagon. The matchup with Tony Ferguson looms, and it will be an important one when it comes to his legacy. Also looming is the bad blood-filled rematch with McGregor, something that will have the world’s eyes on the Octagon once again. Nurmagomedov has yet to show any real weakness in a fight, even more impressive considering the division he reigns over.

Outlook: For as many parody videos that have been made regarding Tony Ferguson’s training methods, what you cannot poke fun at are the results and performances. Riding a 12-fight winning streak that dates back to October 2013, only three opponents made it to the judges’ scorecards in that stretch. Coming off three finishes, including the triangle choke against Kevin Lee that earned him the interim lightweight belt, the elusive matchup with Khabib Nurmagomedov is the one everyone wants. One of the most dynamic fighters on the roster, Ferguson’s pressure, adaptability and viciousness in all aspects of the game make him lethal at all moments. You never know what’s going to happen in a Tony Ferguson fight except for two things: it will be fun to watch, and you’re best off assuming he’s getting his hand raised at the end of the night.

Outlook: One of the roster’s longest mainstays and debatably the division’s best boxer, Dustin Poirier blazed his way through a gauntlet of Anthony Pettis, Justin Gaethje and Eddie Alvarez en route to winning the interim lightweight belt over Max Holloway in one of the best fights of 2019. It was the culmination of a life of fighting and set his date with Khabib Nurmagomedov. At UFC 242, Poirier suffered the same perils as every other one of Nurmagomedov’s opponents, but he also had moments where an upset seemed possible. A right hand jarred the champ early in the second round, and Poirier looked close to sinking in a guillotine choke, but to no avail. Now, Poirier is set to rebuild his case to get a shot at the belt. He already holds a win over Justin Gaethje from their Fight of the Year in 2018, and he lost to McGregor way back when in the featherweight division. He was game to fight Dan Hooker at some point, but what’s certain when considering Dustin Poirier is that when things become difficult, he bites down on the mouthpiece and finds his way to the top. It’s why he’s one of the most respected fighters in the world, and it’s why he’s more than just a stepping stone for lightweights looking for a way to make their name.

Outlook: Little can be written about Conor McGregor that hasn’t already found a page, but what matters is that after more than three years outside of the winner’s circle, McGregor seemed refocused on mixed martial arts, culminating in his first-round dismantling of Donald Cerrone at UFC 246. The bout took place at welterweight, but given Cerrone’s track record of moving up and down between 155 and 170 pounds, it seemed to be considered all the same. Since becoming the first man to hold two belts at the same time, McGregor elevated himself to the status of a global superstar, a businessman and a one-time boxer against one of the greatest to do it in Floyd Mayweather Jr. But after losing to Khabib Nurmagomedov in 2018, some wondered whether we’d ever see “The Notorious” one strut to the Octagon again. During the lead up to UFC 246, he said and did all the right things and was willing to put in the work that it required. At his best, few can forget his lightning in a bottle mixture of creative kicks, game-changing power in his left hand and trash talk, and that’s what makes him one of the most transcendent stars in the sport’s history. Still just 31 years old, McGregor has a world of options available to him, and whether he chooses to compete with someone at the top of the welterweight division like Jorge Masvidal or dukes it out with Justin Gaethje, the rematch with Nurmagomedov is always going to be the goal, it seems. A McGregor fight is almost like a solar eclipse: increasingly rare, but always special and spectacular when it comes along.

Outlook: Justin Gaethje might be allergic to judges’ scorecards. In his whole career, he’s only gone the distance twice, but when you have the power and the chin “The Highlight” carries, there’s not really a point in wasting any time. His love for combat carnage might only be matched by Donald Cerrone, who Gaethje most recently finished in the first round of their headlining Vancouver bout. Since losing a classic bout to Dustin Poirier in April 2018, Gaethje did the unthinkable and changed his approach – if only just slightly. No longer walking forward with reckless abandon, Gaethje showed patience in his last three fights against James Vick, Edson Barboza and Cerrone. When he did unload, though, it came with consequences for his opponent. Riding a streak of three straight first-round knockouts, Gaethje could be considered the most devastating lightweight out there, though not without competition. He also has his All-American wrestling pedigree that hasn’t been seen all too much, but that, combined with his pressure and power, makes him an extremely appealing matchup with Khabib Nurmagomedov. In almost any other circumstance, Gaethje is probably the most deserving contender, but that’s lightweight for you.

Outlook: Since moving to lightweight, Dan Hooker is on a tear. Outside of a speed bump in the form of Edson Barboza, Hooker has won seven of eight fights at 155 pounds, including five finishes. He scored a clear-cut decision win over Al Iaquinta at UFC 243 to establish himself as a top 10 fighter, and then went to war with Paul Felder in Auckland, coming out on the favorable side of a split decision. The bout solidified that Hooker is a top 5 lightweight and deserving of a shot at someone near the top. The City Kickboxing product hasn’t shied away from demanding that shot, either, and he’s recently shown he has the goods. A rangy striker with credible grappling and fight-finishing power, he’s a fun new entrant to the top of the division, and it’s only a matter of time before he finds himself with an opportunity to prove just how good he is.

Outlook: Lightweight isn’t short of championship-level fighters, and it isn’t short on dealing some heartbreak to deserving ones as well. Paul Felder has shown he has the ability and toughness to compete with the top of the division, but in a make or break fight against Dan Hooker, “The Irish Dragon” fell short. He hinted at a potential retirement, but until that’s final, Felder has the power, technique and grit to make any fight against a top contender a competitive one. Same goes for one of the truest O.Gs in the game, Donald Cerrone. Nobody doubts Cowboy’s credentials, but his path is a little murky. After spending some time at 170 pounds, Cerrone announced his intention to go for the 155-pound belt, inspired by the birth of his son. He proceeded to wow fans by taking out Alexander Hernandez and Al Iaquinta in a form that many might call the best version we’d seen of Cerrone. A fun fight with Tony Ferguson was cut short when Cerrone blew his nose, causing his eye to swell shut and forcing a doctor’s stoppage. Since then, Cerrone’s momentum halted as he suffered first-round TKO losses to Justin Gaethje and Conor McGregor. He’s not going anywhere, though, so it’s only a matter of time before Cowboy rides a wave of momentum again. Speaking of momentum, Charles “Do Bronx” Oliveira appears primed to move from “dark horse” status to real contender. Winner in eight of nine bouts, with finishes in each, since returning to lightweight, he made his biggest statement in his third-round submission win over Kevin Lee. He holds the record for submission wins in the UFC and is somehow still just 30 years old, and with the improved striking he showed in his last few fights, he is as lethal a fighter as anyone in the talent-rich lightweight division.