Read on for full results of the UFC 166 televised prelims, which aired on FOX Sports 1 in the US.

Tim Boetsch continued his success at middleweight while 185-pound ex-pat Hector Lombard made a blistering impression in his welterweight debut in the UFC 166 televised prelims. 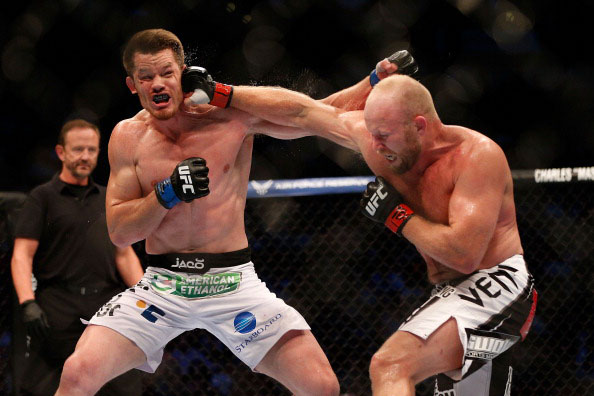 In one of the stranger bouts in recent memory, middleweight Tim Boetsch earned a split decision win over CB Dollaway in a power-wrestler matchup featuring Diaz-like showboating from TUF 7’s Dollaway.

Boetsch came out swinging full-force at Dollaway, who has a history of being stopped by strikes. But Dollaway stayed out of danger and answered with crisp counters. All of Dollaway’s offense was stymied as Boetsch caught his kicks and pursued his opponent. Throughout the round, Dollaway repeatedly taunted Boetsch, even after getting clipped, putting his hands up and goading “The Barbarian” forward. Boetsch’ reactions would open him for counters, plus one nasty body kick from “The Doberman” that was followed by ugly knees from the clinch.

When Boetsch charged in the second, Dollaway, an Arizona State wrestling alum, turned it into a takedown and settled into the top position of a tangled half-guard. He tried to transition to take Boetsch’s back, but the larger man simply stood up. After being hit flush by a right hand, Dollaway reacted with another takedown, and in ensuing scrambles wound up with Boetsch on his back throwing hammerfists. Finally moving things off the floor and fence, Dollaway ducked under another Boetsch punch and took things down again. Boetsch torqued on Dollaway’s arm, but from bottom position, there was little danger, and Dollaway used his free arm to elbow Boetsch in the ribs until the horn.

Dollaway opened the third by throwing his hands up in mockery, and Boetsch swung wildly, only to miss and be felled seconds later by an accidental finger to the eye. After a brief doctor check, Boetsch came out firing. But Dollaway defended with another push that landed in the eye, earning him a point deduction from referee Kerry Hatley. Boetsch came forward and connected with a left and a right, but Dollaway ducked just enough to catch the kick and get the takedown. Boetsch held a guillotine but Dolalway passed into full mount before the powerful Boetsch again spun out of danger onto his feet. Pinnind Dollaway against the fence, he gladly took out the bad blood with foot stomps. Boetsch chased his Doberman for the final minute, as Dollaway loaded up his right for the counter. He got two more takedowns that Boetsch answered with choke attempts before the horn sounded.

Thanks to the point deduction, Boetsch’s scores were 30-26 twice and 27-29 once, as he improves to 17-6; 5-2 in his new home as a middleweight. Dollaway, who took the bout as an injury replacement for Luke Rockhold, slides to 14-6.

Nate Marquardt vs. Hector Lombard
After two straight fights that went to decision, Hector “Lightning” Lombard woke the crowd up by putting Nate Marquardt to sleep in the first round of his welterweight debut.

Lombard’s stance was loose and low as he stalked Marquardt, a fellow former middleweight, around the canvas. Marquardt lobbed a high kick but little connected until a clinch in which Lombard fired off rapid shots before Marquardt broke it with a big knee. But a big left hand from Lombard stunned Marquardt, and Lombard wasted no time in capitalizing as Marquardt tried to back away. Lombard chased him and threw more, and though Marquardt’s taller size made his guard tough to get through, Lombard connected at least one more time with a right. Whether Marquardt toppled or slipped onto the mat, Lombard didn’t stop to ask, following with nasty right hammerfists that put Marquardt out definitively at 1:48.

Round one set the pace for the fight, with Kaufman pursuing and Eye trading back. Eye responded to exchanges by tying things up on the fence, dirty boxing and doing some foot stomps. Having eaten a straight from Eye and some elbows in the clinch, Kaufman came forward more aggressively, instigating the clinch and lobbing knees. She teed off at one point after freeing herself against the Octagon wall, landing a big knee and several shots.

British Columbia, Canada’s Kaufman mixed it up more in the second, dotting an early clinch with 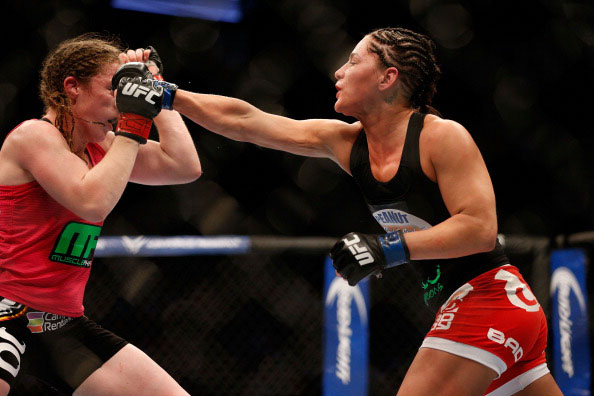 uppercuts and knees before adding low kicks into the sequence. Having found her range, she doggedly pursued and traded with Eye, wearing a mouse under her own left eye for her troubles. A big right hand from Kaufman inspired Eye to push things against the fence, where she mercilessly stomped Kaufman’s feet. Kaufman turned things around and pushed Eye to the fence, punishing her with knees to the thigh and an elbow to the face.

Although it continued to be Kaufman coming forward and putting together combinations in the third, Eye landed the first solid strike of the round, a long left. Kaufman controlled the clinches against the fence in round three, doing her best with knees from close quarters. With around 90 seconds left, a big right from Kaufman knocked Eye backward on her feet, though Eye survived the followup flurry and pushed things back to the fence for safety. With “Evil’s” left eye swollen to match her opponent’s, Kaufman sealed the round for herself with more right hands from the clinch.

Judges 29-28 29-28 and 28-29 for Eye, whose record improves to 11-1 in her move up from flyweight. Kaufman slips to 16-3, with her only other losses coming at the hands of UFC champion Ronda Rousey and former Strikeforce champion Marloes Coenen.

Sotiropoulos circled as Noons tested his range with jabs, both keeping a long distance that drew jeers from the crowd that had just seen four finishes in a row. Noons landed a few shots to the Aussie’s body and Sotiropoulos landed one counter and by minute three, the crowd was booing in full force. Noons, a former pro boxer, landed one flush shot that earned cheers, likely due to the relative lack of action, and then took a finger to the eye that triggered a brief break. Noons finally flurried in the final thirty seconds, clipping Sots several times. 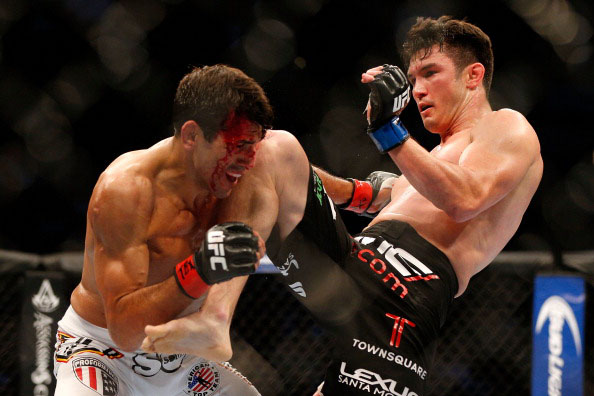 The seal broken, the two started the second in close quarters, Noons pressing the action and Sotiropoulos holding his own with counters and kicks. Noons’ weaving put his head directly in the line of fire of Sotiropoulos several times, allowing the TUF Smashes coach to score and, three minutes into the round, earn a takedown. This time when Noons surged at the end of the round, Sotiropoulos was ready, landing a nice hook and head kick in the closing half-frame.

Round three quickly erupted into a wild boxing match, Sotiropoulos adding on high kicks and a takedown attempt. Noons continued to load up his hook, but left himself open to the same from the Australian. Two right hands from Noons wobbled Sotiropoulos and bloodied his forehead, but the tenacious 36-year-old kept coming forward, trying again for a takedown. Noons was impassive between shots, his hands down, his posture open, a look of confusion on his face as he tried to find the one shot to put Sotiropoulos away for good. Noons fired massive shots and Sotiropoulos tried more high kicks, but by that time, neither held the power to change the course of the fight.

Hear from Noons in his post-fight interview with Megan Olivi