A Lifetime of Prep Brings Koch to UFC 128

“Nothing is quite like knocking somebody out.” - Erik Koch 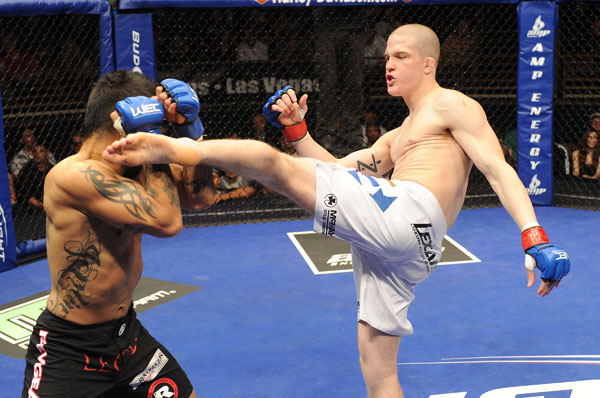 If any of the 12 fighters on rising featherweight star Erik Koch’s professional MMA record want someone to blame for receiving a knuckle sandwich or a roundhouse boot to the head then look no further than those children’s cartoon show ninja turtles. Long before Duke Roufus and the WEC, it was these reptilian crime fighters that lit a fire inside the young fighter’s heart to pursue a competitive life in martial arts. At UFC 128, a new chapter in Koch’s career will begin as he debuts his fists and feet of fury inside the Octagon and, maybe, some “turtle power”.

The obvious question is, who is “New Breed” Koch’s favorite ninja turtle?

“Raphael. He's the mean one. He's the temper. He's the loner. He'll do it by himself if he has to. He doesn't take crap from anybody. For sure Raphael. A lot of people might like the others better, but I have to go with Raph.”

He is not joking. The owner of the WEC 52 “Knockout of the Night” award fell in love with spin kicks and uppercuts watching that cartoon show, and at the age of four he started training Tae Kwon Do because of it. For the better part of his first decade on this planet, Koch was in the gym sparring and honing his affinity for the stand-up game. Eventually, Koch stopped goofing around, got serious, and began training MMA... at age 11.

“I stuck with Tae Kwon Do until I was 10 or 11, then I stopped to pursue MMA. My brother started doing MMA just in his basement on an 8x8 mat before The Ultimate Fighter or before people really knew what the UFC was. I've been training since I was little kid. I've always been into combat sports or some sort of fighting martial arts. My all-around game comes from doing this for so long and I'm so used to it. That's why I am who I am: a fighter.”

The Iowan’s older brother, Keoni, introduced him to MMA during those early days in the basement. The two continued to push each other as they joined a local fight gym in Cedar Rapids called Hard Drive. Nowadays, Keoni owns a 4-0 MMA record - all by submission - and is in the process of opening a new Hard Drive MMA gym. Also, the eldest Koch brother coined his younger brother’s nickname: “New Breed”.

“I got the nickname "New Breed" because I can take the fight anywhere,” says Koch, whose record reflects that of a submission specialist trapped in a knockout artist’s body. Koch is a part of this new generation of fighters who are dangerous in all aspects of the game and looking to finish wherever the fight takes them. With an overall record of 11-1, the 22 year old has seven victories of the tapping variety and only two of the punching variety, but not by choice.

After amassing an 8-0 record in a little over two years in local Iowa shows, a chance invitation to train at another MMA gym propelled Koch from regional tough to fighting on the international stage of the WEC. The gym was Roufusport in Milwaukee, Wisconsin, which is owned and operated by kickboxing legend Duke Roufus. Koch’s Hard Drive teammate, Jesse Lennox, had cross-trained for years at Roufusport and asked Koch if he wanted to join him on the four hour trip North. Once there, Koch found himself exchanging kicks with a future WEC champion and on a new career path.

“It was crazy and it happened so fast. It was right before Anthony Pettis' first fight in the WEC. I sparred with Anthony. When we finished Duke pulled me aside and asked me where I fight. I told him local shows around Iowa and the Midwest. He asked me if I had a manager and I told him I didn't. He asked me where I wanted to fight. At this point, I was like ‘man he kind of seems like he's trying to manage me’ and Duke just got Anthony a fight in the WEC, so I said wanted to fight in the WEC. He said OK and that was it. The next day he called me and asked if I wanted him to manage me. I said yes. The next day he got me a five fight contract in the WEC.”

“New Breed” went 1-1 in his first two fights in the WEC with both ending in decision. Following the loss to wrestling machine Chad Mendes, Koch made the permanent move to Milwaukee to train at Roufusport full-time.

“You learn more from a loss than a win; that is really how you know a fighter,” Koch said, explaining that the fight was a learning experience and with Roufus’ training he has become more patient and a greater distance fighter. “Some guys, they know what they need to improve on, they're smart about it, they train hard and end up coming back a monster. I think that's what happened to me. I learned a lot from that fight and it has made me the better fighter I am today.”

Since the relocation, Koch is 2-0 with two first round stoppages. The first of the two was a triangle choke over veteran Frenchman Bendy Casimir at WEC 49. “I was dying to get a win,” asserts Koch who experienced his first MMA loss in the Mendes fight and knew he couldn’t lose twice in the hotly competitive 145-pound division of the WEC. “I had an angry camp. I was pushing it to the next level, which is what I needed to do. I was hungry and it got my momentum back.”

The most recent win, last November, is easily the crowning achievement thus far in Koch’s young career: a first round head kick knockout. “Nothing is quite like knocking somebody out,” Koch affirms, regarding his 1:36 stomping of Francisco Rivera, which earned him a “Knockout of the Night” bonus. “The gameplan going into that fight was to not play into his game and brawling with him; keep my distance and pick him apart. High low, high low with kicks and that's what I did. I have to trust my coach Duke Roufus and that was the gameplan and it worked perfectly. It was awesome.”

Now, “New Breed” will be making the transition to the new UFC featherweight division, with his first challenge being Brazil’s Raphael Assuncao. “Raphael Assuncao is a tough dude and I think he is a little underrated,” estimates Koch. Assuncao has an impressive 15 wins and three hard-fought losses against top opponents like Jeff Curran, Urijah Faber and Diego Nunes. “He's a strong dude and he's well rounded. A lot of people think of him just as a ground guy, but he has a good traditional boxing style.”

Besides trying to add a fourth loss to Assuncao’s record, Koch will be gunning to be the first to knock him out. “I don't think he has fought anybody like me and I don't think he has fought a striker like me,” states Koch who will have a definitive reach and height advantage being at least a solid five inches taller. “I'm somebody who knows how to use my reach to my advantage. I think that is going to make it a long night for him. I totally want to screw him up standing.”

In Newark, New Jersey at UFC 128, Erik Koch will be looking for a highlight reel debut win in the Octagon against Raphael Assuncao. It is a fight that Koch has been preparing for since he was four years old. It’s a fight he has trained for in Milwaukee with Duke Roufus and Anthony Pettis, in Cedar Rapids with team Hard Drive, in a basement with his older brother Keoni, in a kid’s Tae Kwon Do class in Iowa, and, even, in front of a TV with the Teenage Mutant Ninja Turtles.