Life Is Good For Matt Frevola

"Steamrolla" Talks Summertime, Marriage And Getting Back In The Octagon Saturday Night
By Thomas Gerbasi, on Twitter: @TGerbasi • Jun. 11, 2021

Splitting up training camps between Tampa and Long Island has given UFC lightweight Matt Frevola the best of both worlds, and not just in the gym, but in his outlook on life.

Take a recent – and long – stretch from October 2019 to late-May 2021, when a win over Luis Pena extended his unbeaten streak to three and set him up for big things in 2020.

Then big things turned to no things, as three bouts were scheduled, then canceled. Frevola wasn’t happy, but he stayed in shape, kept the ringer on his phone on high, and then the call came for him to return to the Octagon for a January 2021 fight against Ottman Azaitar on UFC Fight Island.

“2020 was tough having all those cancelations, but then we got that fight booked in Abu Dhabi on a (Conor) McGregor card,” said Frevola of fighting on the undercard of UFC 257, where McGregor battled Dustin Poirier in a highly publicized rematch. “It was against Ottman, which I was real pumped about because he was undefeated with a lot of hype. I had a great training camp, I go out to Abu Dhabi and everything's going perfect.”

Ah, those big things again. Until the fight with Azaitar wasn’t there anymore.

“The day of weigh-ins, I got two pounds to cut, my coach Matt Arroyo walks in and he's just like, ‘Ottman's out.’ I couldn't believe it and it hit me like a ton of bricks. There were all these cancellations, I was out in Abu Dhabi, this guy gets pulled, but my coach and my team made sure that I cut that last two pounds and weighed in.”

Frevola weighed in without an opponent and hit his mark. Meanwhile, his team tried to keep his spirits up, telling him that on a card featuring McGregor, Poirier, Dan Hooker, and Michael Chandler, as well as a third lightweight bout between Arman Tsarukyan and Nasrat Haqparast, he could very well get a fight if someone fell out like Azaitar did.

“They were encouraging me that I would be a replacement fighter – they said, ‘Dustin Poirier could fall out and you could be fighting McGregor,’” Frevola laughs, knowing that his squad meant well. “There were a bunch of other '55ers on the card, so they made sure that I made the weight and they're telling me I could fight Dan Hooker or Michael Chandler. So I was holding hopes on stepping in. And then probably the toughest guy who's the most not-known guy on the card - Arman - his opponent falls out.”

Haqparast withdrew from the bout due to illness, and with Tsarukyan missing an opponent as well, the fight with Frevola was made, even with Tsarukyan missing weight to throw another wrench in the works. But the New Yorker didn’t care, and though it didn’t go the way “The SteamRolla” hoped it would, he has no regrets about taking the bout. 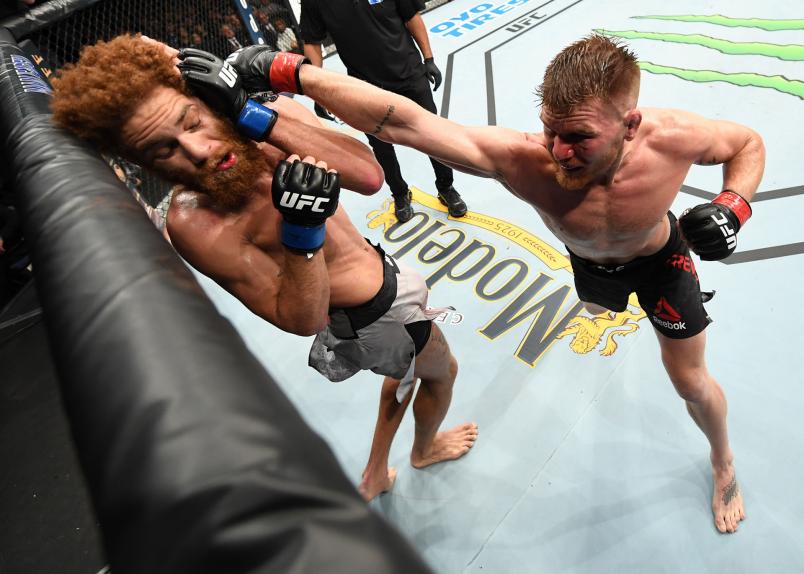 Matt Frevola punches Luis Pena of Italy in their lightweight bout during the UFC Fight Night event at Amalie Arena on October 12, 2019 in Tampa, Florida. (Photo by Josh Hedges/Zuffa LLC)

“I stepped up,” he said. “I didn't go all the way out to Abu Dhabi to not fight, so the opportunity came and I was prepared and I stepped up and I fought him hard. I was preparing for a boxer the whole time and then I got thrown a high-caliber wrestler and I went out there and I fought. That's what I do. It felt good to get in there and dust the cobwebs off, get that fight feeling back. The fight didn't go the way I wanted it to, but it was a good scrap and it made me better. I've got a lot to work on and I definitely want that fight back with a full camp. With a full camp, I think that fight with me and Arman goes way different.”

The unanimous decision loss snapped Frevola’s unbeaten streak and handed him his first loss since his UFC debut in 2018. But he got a fight in, shook off some ring rust, and he got a fairly quick call to meet one of the fighters he was supposed to face in 2020, Frank Camacho, this weekend at UFC 263. And when we spoke on May 25, he was eager to get into a fight, enjoy the summer, and prepare for his September wedding.

That’s where that sunny Florida attitude comes in and dilutes the New York pessimism we’re all born with.

“Life is good right now,” he said. “It's getting beautiful out in Long Island, the sun is shining and it's gonna be a great summer. I'm glad I get to get this fight in June and then go back home to Long Island, enjoy summer a little and then marry the woman who's the love of my life in September.”

But then something happened on the way to Glendale, Arizona. Earlier this week, Camacho was in a car accident and forced to withdraw from the bout. Enter Spokane’s Terrance McKinney, who Frevola agreed to fight the day after his 31st birthday.

No, it’s not the way he expected things to go…again…but knowing Frevola, he’s just happy to be in the Octagon with anybody. And on fight night, he’ll be ready to go. That’s where the New Yorker comes in.

“I'm a Strong Island kid through and through,” he said.