Life is Good for Scott Jorgensen

"The way I look at things is, I’m always trying to improve my life; not just in the cage or the gym, but at home as well." - Scott Jorgensen 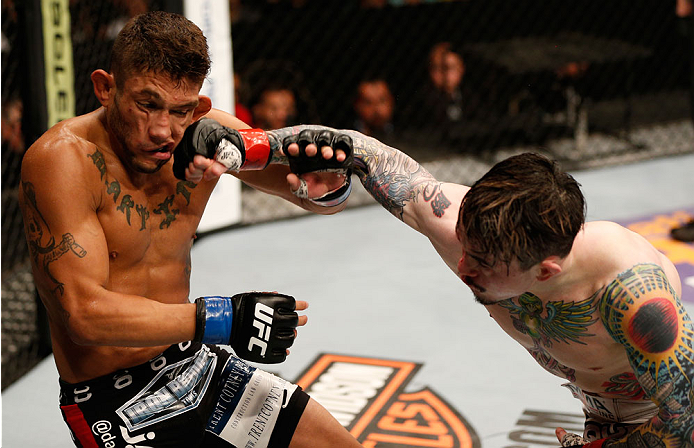 Scott Jorgensen likes his video games. He streams his game playing in his off-time, he has his own team that goes out and represents him in the ever-growing field of competitive gaming, and while he’s not about to drop his career as a UFC flyweight contender, “Young Guns” is pretty good with the controller. So much so that he says it has some benefits for his fight game.

“It does help my reaction time, especially the Call of Duty game because it moves so quickly, and the way the competitive rules are set up, it’s not just like run around, kill someone, run around, kill someone,” he explains. “There are three game types: Domination, Search and Destroy, and a Blitz. But as you go, it takes strategy and it takes teamwork, and you have to think on the fly and make split-second decisions and choices in order to win. So I think it definitely helped not just my hand-eye coordination, but my reaction time. And it also helps my critical thinking skills.”

The competition isn’t bad either.

After years on the mat as a wrestler, and in the gym as a mixed martial artist, the 32-year-old Idaho resident has found that place where it wouldn’t be accurate to call him content, but he does know what he’s doing and why he’s doing it. Jorgensen has a son, he’s married now, he’s always on the lookout for good opportunities outside of fighting, and he’s happy. That’s not a bad spot to be in.

“The way I look at things is, I’m always trying to improve my life; not just in the cage or the gym, but at home as well,” Jorgensen said, and with all that going well for him, the only thing left is to take his day job to the next level, and that starts with his UFC 179 bout against Wilson Reis this Saturday. It’s his first trip to Brazil since his controversial loss to Jussier Formiga in March, but he didn’t have to be convinced to go back there to face Reis.

“They didn’t have to pull my leg,” he laughs. “They called me and said you’re gonna go to Brazil and fight and I said ‘okay.’ That’s how I work. I fight anybody, I fight where they tell me, I don’t bitch and moan, I do my job and I do it well. But honestly, the whole going to Brazil, and the BS that happened the last time I was there has kinda fallen into the back of my mind. Things happen in the past, you’ll never change them, so you move on.”

That first time around, Jorgensen was on a two-fight losing streak, and it turned to three when Formiga submitted him in the first round. That’s the official result of the fight, but what doesn’t show up on a win-loss record was the accidental headbutt by Formiga that dazed Jorgensen and allowed the Brazilian to finish off the fight. Referee Wernei Cardoso missed the call, and that was bad enough for Jorgensen, but when Formiga disputed the headbutt in post-fight interviews, well, you can see where this is going.

“The only thing I want to do now is get through Wilson and I want to fight Formiga,” he said. “I want to finish that kid and finish him proper. He’s probably one of the only guys I’ve ever had bad blood toward because of what he went out and said post-fight.”

With that third straight loss, Jorgensen was 1-5 dating back to 2012, and while he didn’t lose to any cupcakes during that stretch, another defeat could have put him out of a job in the UFC. But as he explains it, he wasn’t worried about his job heading into his June bout against Danny Martinez.

“I really wasn’t. I’m not worried ever when I step in that cage. I definitely feel more pressure sometimes, depending on who I’m fighting, but the most pressure I felt in a while was fighting (Urijah) Faber and the only pressure there was ‘dear God, one of us is going to have bragging rights, and he can always bring that up wherever we’re at and say I got you.’”

Jorgensen laughs, and his ease in talking about that rough patch – which did include a 2013 loss to his buddy Faber – shows you that the Martinez bout was a victorious one. Not only that, but the two flyweights each picked up a Fight of the Night bonus check, and after an aborted match with Olympian Henry Cejudo in August due to the Gold medalist’s weight issues, Jorgensen is back on Saturday with the chance to win his second straight.

So it’s a good time to be Scott Jorgensen, but the question has to be asked: has Faber reminded him of his loss?