Life Begins at 40 for These UFC Stars 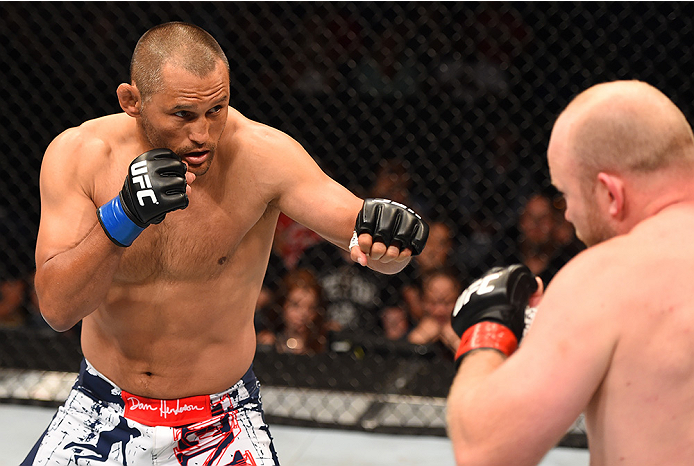 As 45-year-old Dan Henderson prepares for his November 7 rubber match with Vitor Belfort, it’s important to point out that he is one of a very rare breed of fighter that has not only continued to scrap at 40 years old or older, but that has stood victorious as well. In celebration of the 40-somethings, here is a list of the nine UFC fighters thus far who have posted an Octagon win and proved that life begins at 40.

Honorable mention: Jorge Rivera
First thing first - “El Conquistador” has to get a shout out. The Ultimate Fighter 4 alum and Army veteran - who went 8-7 with five KOs in UFC middleweight competition - retired from the sport following his second round TKO of Eric Schafer at UFC on FX: Guillard vs. Miller. At the time, Rivera was a month shy of his 40th birthday. So close, El Conquistador.

Mark Coleman
UFC 100 was a remarkable event for fans, fighters and the company. And it was especially memorable for Mark “The Hammer” Coleman, who grabbed a unanimous decision win at 44 years old, which was also his first UFC win in over 12 years. The former NCAA Division I National Champion wrestler, US Olympic wrestler, two-time UFC tournament winner, UFC heavyweight champion, PRIDE 2000 Open Weight Grand Prix winner and UFC Hall of Famer took his final victory with a gritty effort against Stephan Bonnar in only Coleman’s second bout as a light heavyweight. It was an emotional win for the “Godfather of Ground and Pound” that stamped his place in this group.

Randy Couture
Without question, the most accomplished fighter in this group is “The Natural,” Randy Couture. The UFC Hall of Famer won the UFC heavyweight title and the UFC light heavyweight title (two times) AFTER turning 40 years old. Never say never, but that type of success will never happen again - probably at any age. The former multiple-time US Olympic Greco-Roman wrestling team alternate won eight times inside the Octagon post-40. Couture’s final W came at UFC 118 when The Natural was 47 years old – a UFC record - and he easily secured a first round arm-triangle choke of boxing great James Toney. Whether it was 1997 or 2007, Couture could compete with the best and he could beat them.

Mirko Cro Cop
The most recent entrant to this exclusive club is one of the sport’s all-time greatest strikers - Mirko Cro Cop. Returning to the Octagon after four years away, Cro Cop headlined the UFC’s first event in Poland with a rematch against Gabriel Gonzaga, the man who delivered Filipovic his most grievous loss back at UFC 70. At 40 years old, Filipovic weathered several early storms from the giant “Napao” before turning the tables on Gonzaga and tattooing the big fella with a pair of elbows that dropped him. The high drama bout netted the duo Fight of the Night bonuses and earned Cro Cop his first Octagon win since his Submission of the Night of Pat Barry at UFC 115. On November 28 in Seoul, he will take on Anthony Hamilton and aim to up the ante and get a UFC win at 41 years old.

Dan Henderson
They say one’s power is the last thing to go and, undeniably, there’s plenty of explosiveness left in Dan Henderson’s “H Bomb.” The former two-time US Olympic Greco-Roman wrestler, PRIDE middleweight and welterweight champion and UFC 17 tournament winner turned 40 while competing in Strikeforce and went on to win their light heavyweight title. At 41 years old, Henderson returned to the Octagon and took part in an unforgettable war against Mauricio “Shogun” Rua, in which Henderson would win the Fight of the Night/Year award by unanimous decision. Since then, Henderson has experienced more losses than wins in the UFC, but he has scored unbelievable striking stoppages of Rua in their Fight of the Night rematch and, most recently, against Tim Boetsch in June with a 28-second KO. On November 7 in Sao Paulo, Henderson at 45 years old is set to scrap in a headlining trilogy-ender with Vitor Belfort.

Mark Hunt
Speaking of non-fading power, “The Super Samoan” Mark Hunt did the near unthinkable and knocked out “Big Country” Roy Nelson in September 2014 when Hunt was 40 years old. The Performance of the Night-grabbing stoppage was Hunt’s fourth finish inside the Octagon and his fifth bonus. The only non-European to be crowned the K-1 World Grand Prix champion has suffered back-to-back losses since the Nelson win, with the first being a short notice tangle with Fabricio Werdum for the interim UFC heavyweight title. But the fan-favorite knockout artist - whose last four UFC bouts have all been main events - is headed for the titanic rematch against Antonio “Bigfoot” Silva at UFC 193. And Hunt will have that possible record setting 70,000+ in attendance behind him as he goes for his first win at 41.

Cung Le
The San Shou and Strikeforce legend Cung Le earned his only two UFC wins at 40 years old. After going 7-1 in Strikeforce, including winning their middleweight belt, the famed kickboxer from Vietnam made his long-awaited UFC debut in a brutal Fight of the Night with Wanderlei Silva where “The Axe-Murderer” finished Le at the end of the second round. Le had much better luck the following year as he earned a unanimous decision win over Patrick Cote at UFC 148 before landing a highlight reel, one-punch Knockout of the Night of former UFC middleweight champion Rich Franklin in Macao in November of 2012. Le’s final fight inside the Octagon came also in Macao nearly two years later, but in a stoppage loss to Michael Bisping in their main event clash. Since then, Le has announced his retirement from MMA.

Vladimir Matyushenko
Who would’ve guessed “The Janitor’s” final UFC win would have been his quickest? At the ripe age of 40, the former Soviet National Wrestling champion who amazed U.S. Olympic great Dave Schultz so long ago, scored a 20-second knockout of Jason Brilz at UFC 129. Known as a grinding and powerful mat technician for the majority of his 17-year pro MMA career, The Janitor’s last five fights inside the Octagon never made it into even the third minute of the first round each time. Matyushenko would be on the wrong side of three of those fast finishes, but The Janitor did find his mark with a right uppercut and left straight combination that floored the fellow wrestler Brilz. Currently, Matyushenko is retired and married, the latter of which he did at the 2011 UFC Fighter Summit.

Anthony Perosh
First at 41 and then at 42 years old, “The Hippo” struck hard and fast with first-round finishes inside the Octagon. An acclaimed Carlos Machado BJJ black belt, Anthony Perosh decked fellow BJJ black belt Vinny Magalhaes at UFC 163 to earn a 14-second Knockout of the Night bonus and entry into this over-40 winning crew. After taking a drubbing from Ryan Bader in December 2013, The Hippo returned 11 months later to secure a rear naked choke of Guto Inocente in Perosh’s native Australia. Earlier this year, Perosh had another setback with a TKO loss to Sean O’Connell, but he is ready to get back on the winning track in home territory against Gian Villante at UFC 193.

Ken Shamrock
The third UFC Hall of Famer on this list is fittingly one of the Octagon’s first stars - “The World’s Most Dangerous Man” Ken Shamrock. Way back when in November 1993, a curious bunch of people tuned in to see the Ultimate Fighting Championship (not challenge) and they got to watch Shamrock execute what would become his trademark heel hook. A little less than two years later, Shamrock would steamroll through fellow UFC Hall of Famer Dan Severn to become the first UFC Superfight champion. In his second defense of the belt, Shamrock secured a kneebar on Kimo Leopoldo at UFC 8 in Puerto Rico. Cut to eight years later, The World’s Most Dangerous Man was 40 years old and he was stepping into the Octagon once again with Leopoldo at UFC 48. It took Shamrock three minutes less to earn the finish the second time around by delivering a KO with his knee rather than torquing his opponent’s knee to get the submission.