The Life and Death and Life of Uncle Creepy

Thomas Cunningham introduces the newest member of the UFC roster, a man many believe to be the top flyweight in the world - Ian "Uncle Creepy" McCall 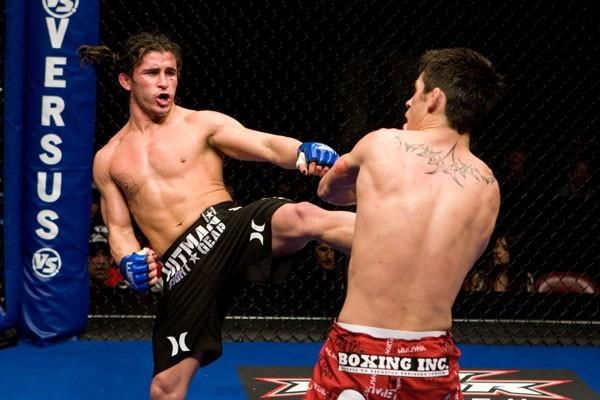 “This is the evolution of me, which has turned out pretty good for me so far. If you stop evolving in this sport, you’re screwed.” – Ian McCall

There are two things you have to address when the topic is Ian "Uncle Creepy" McCall: the nickname and the mustache.

You could write a whole book or movie about Ian McCall's life so far. He was a troubled misfit with a lot of natural talent as an athlete who became a fighter, but wasted a lot of his potential with self-destructive tendencies and yet still accomplished a lot before hitting rock bottom and coming back to become a champion. But for McCall, that was only the first act.

The old Ian McCall cruised by on natural talent and youthful cockiness. He wrestled in high school and college and was taken under the wing of UFC legend Chuck Liddell and longtime contender Antonio Banuelos. Fighting was just something Ian liked doing. Partying was something he liked doing more. We all know how those stories end - in redemption or tragedy. In Ian’s case, it was both.

McCall's wild ways eventually resulted in him being arrested. He chose to sign up for rehab to avoid jail, but the experience wound up changing his life. Sobriety can be a rough transition for someone whose addict lifestyle defined them, but for McCall, it allowed him to reach his potential and bring what was important into focus. A lot of addicts either get clean or wind up dead or in jail. In Ian’s case, it was all three. At one point, he accidentally overdosed, was clinically dead and spent two weeks in the hospital.

“The doctor did all my vitals and he said ‘I saw you dead on a table, I revived you and two weeks later, you’re in better shape than I’ve ever been in my whole life.’ At that point my dad said to me ‘are you done?’ and I said ‘yeah.’ I was.”

Ian realized that his days of pressing his luck were over and it was time to start counting his blessings and focusing on accomplishing the things he wanted out of life.

"I constantly have to push the envelope, no matter what I'm doing, and this is a healthy way for me to push it."

Things quickly started to fall into place for the sober and literally reborn Ian. A year ago, Ian McCall dropped down to 125 pounds and believed he could be the best flyweight fighter in the world. The world, however, thought Jussier da Silva was the best flyweight in the world. Ian McCall was a bantamweight that was 1-2 in the WEC - but that was the old Ian. The new Ian, “Uncle Creepy”, wasted no time in accomplishing his goal of proving that he was the best at 125. His very first fight at flyweight was against the aforementioned number one ranked da Silva and Ian knew he wasn’t expected to win.

“The strides I made in the gym since the Dominick [Cruz] fight, obviously no one else saw… They wanted a sacrificial lamb because no one wanted to fight Jussier.”

McCall beat Jussier handily in a unanimous decision win on February 18th of this year. You’d think that beating the number one ranked guy in the world would be enough of an accomplishment, but Ian wasn't about to slow down. He fought undefeated Dustin Ortiz in May and won another unanimous decision in an exciting fight that Ian dominated. He then finished the Tachi Palace Fights champ, Darrell Montague, via third round submission in August to take the title. McCall was now considered the number one flyweight in the world. All of this happened within six months of dropping down to 125.

However, this wasn't the end game for “Uncle Creepy”. Ian knew that the UFC had plans to add a flyweight division and he wanted to make sure that when that happened, he'd be on the top of the list of fighters recruited. Mission accomplished. McCall is now a UFC fighter. He’s set to face former bantamweight title challenger Demetrious "Mighty Mouse" Johnson in a four-man flyweight tournament that also pits another former bantamweight contender, Joseph Benavidez, against highly ranked Japanese flyweight Yasuhiro Urushitani in March of 2012. The winner of those fights will fight each other for the flyweight title.

So, basically, McCall climbed to the top of one mountain to find himself at the foot of another. With some of the best UFC bantamweights dropping down and all the best flyweights from around the world hungrily eyeing that new UFC flyweight belt, McCall knows he's got a tough road ahead if he wants to go down in history as the first ever UFC flyweight champion. That's cool with him.

Aside from becoming the number one ranked flyweight in the world and getting a championship belt, Ian reconnected with an ex-girlfriend that also had given up the party lifestyle. She's now Ian's wife and they have a newborn baby daughter and two Chihuahuas. “Uncle Creepy” is now a happy and grounded “Papa Creepy” and soon he hopes to be “UFC Champ Creepy”… but that's act two.