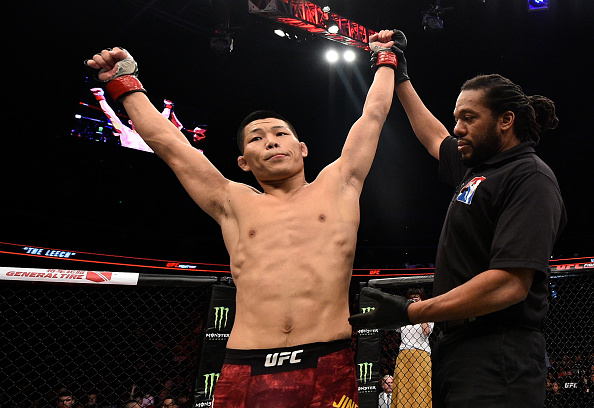 Fighting at home in Mainland China for the first time since 2009, Beijing welterweight Li Jingliang thrilled his fans at Mercedes Benz Arena in Shanghai, stopping Zak Ottow in the first round of their UFC Fight Night co-main event.

Ottow had some success early as he switched stances and peppered Li, but “The Leech” stayed the course, and after momentarily jarring Ottow with a left hook, a right hand followed that put the Milwaukee product on the deck. Li followed up with a barrage of ground strikes, and while Ottow tried to recover, it was to no avail, as the series of unanswered blows brought in referee Herb Dean to halt the bout at 2:57 of the opening round.

THE LEECH!!!@UFCJingliang stops Ottow in round 1 then RUNS TO HIS DAUGHTER IN THE CROWD!!

Xi’an’s Wang Guan made a successful entrance into the UFC in featherweight action, using an accurate striking attack to win a three-round split decision over Alex Caceres.

Wang (20-1-1) showed his power early with an elbow that rattled the Floridian, and while Caceres rallied in the second half of the round, a left hand from Wang hurt and dropped Caceres, with only the horn saving “Bruce Leeroy” from a stoppage defeat. 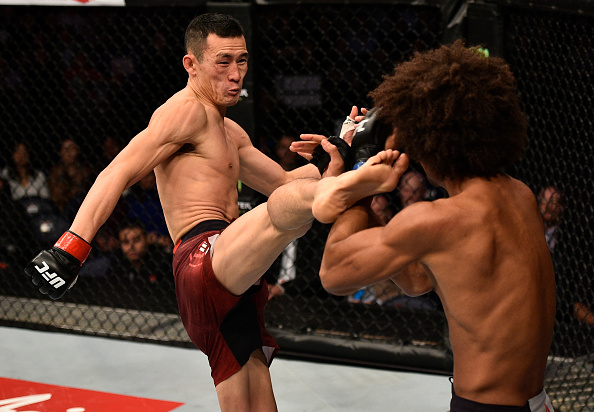 Still wobbly as round two began, Caceres (13-11, 1 NC) stayed busy and tried to get his legs back, but Wang was still jarring him when he was able to land upstairs. By the midway point of the stanza, Caceres appeared to be back in business, and his activity rate kept him ahead of Wang, who was looking for one shot. Occasionally Wang would land that shot, but with no follow-up, Caceres stayed in the fight.

The bombs kept coming from Wang in the final round, and the wear began to show on Caceres’ face. The gutsy veteran didn’t stop fighting, though, and while he finished strong, it wasn’t enough to take the final decision, which went to Wang by scores of 29-28 twice and 28-29,

Garcia shot for a takedown early and got it, nullifying Salikhov’s striking attack almost immediately. After a spell on the mat, Salikhov scrambled his way out of trouble and back to his feet, and then the kicks started coming. A second takedown attempt by Garcia came up empty, but number three hit paydirt with under 30 seconds left.

After some tactical standup to kick off round two, Garcia got the fight down to the mat again, and this time, he smoothly took Salikhov’s back and ended matters, sinking in the rear naked choke that forced a tap out at 3:22 of the second stanza.

With the win, the Dominican Republic’s Garcia moves to 15-4. Dagestan’s Salikhov falls to 12-2.