When Rich Franklin ended Chuck Liddell’s UFC career, it didn’t come without repercussions. Franklin broke his arm one minute into the first round and after a quick shake off, Franklin broke the hearts of MMA fans when a right hand stopped Liddell with five seconds left in the round.

It was the 15th and final knockout of Franklin’s career and his only Knockout of the Night bonus.

Rich Franklin is now a UFC Hall of Famer and many cite his fight with Liddell as a legendary performance on the biggest stage and a career-defining demonstration of what makes mixed martial artists a special breed.

But what if the fight didn’t end in the closing seconds of the first round? Would Franklin’s corner have thrown in the towel? And what if the stage was smaller? Would the fight have been worth powering through in a smaller promotion where it would be just as easy to explain that you broke your arm and lost?

The questions can go on forever and we’ll never know what “Ace” would have done because history will never be re-written to address any hypothetical scenario.

As for Holly Holm, the questions were all answered in her seventh career MMA bout at LFA 30.

After an 11-year professional boxing career that landed Holm almost every accolade she could garner, Holm stepped away from the sweet science with a 33-2-3 record in order to pursue a mixed martial arts career full-time. 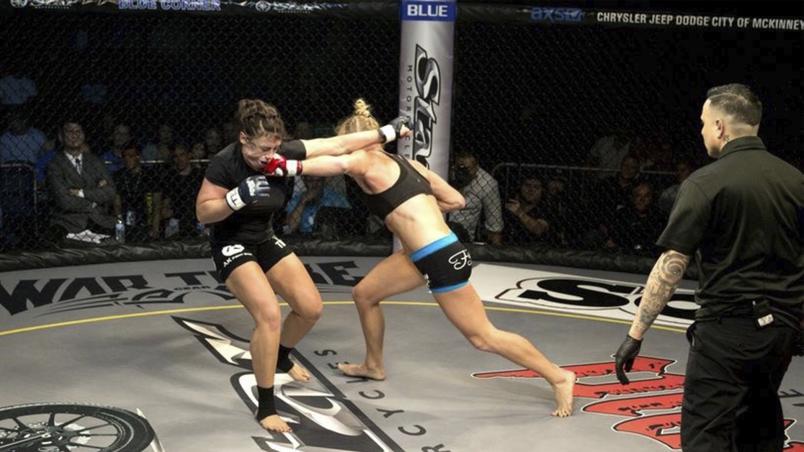 Holly Holm found immediate success in the sport and it wouldn’t be long before “The Preacher’s Daughter” found herself in one of the top regional promotions in LFA, where she would fight for the inaugural LFA women’s bantamweight title against a very game Juliana Werner in April 2014.

Training camp, travel and warmup went according to plan and the 6-0 Holm was ready to complete yet another finish, this time for MMA gold.

“This girl came from a Muay Thai background and Muay Thai fights are tough,” Holm said. “You kind of beat your body up in those. I knew she’d be really tough, and I knew I had to perform well in order for the UFC to want to sign me.”

While weathering the storm for the first few minutes, Holm found out exactly what she was made of when a perfectly-read head kick attempt by Werner was blocked by Holm which might have caused more damage than absorbing the Thai striker’s shot.

“It wasn’t even the hardest kick, it hit just right and I heard a snap in my arm and I remember thinking, ‘Did I just break my arm?’ I kind of moved my wrist around and I could hear it clicking,” Holm recalls.

Trucking through the rest of the round was a balance between “I’m still okay” and survival mode for Holm. Avoiding using the broken left arm in a battle with a Thai fighter is a juggle in itself. Openings that Holm may now hesitate going after instead of attacking seem to get bigger, as opportunities for the perfect strike are few and far between. The other chainsaw Holm was juggling was not showing the pain. The second there’s blood in the water, the fight is as good as over for the wounded fighter, so favoring the arm in any way could spell the end.

The first round came to a close and Holm survived the first storm as she went back to her corner but realized communication and game plan were now going to be a serious issue if she wanted to continue to fight. 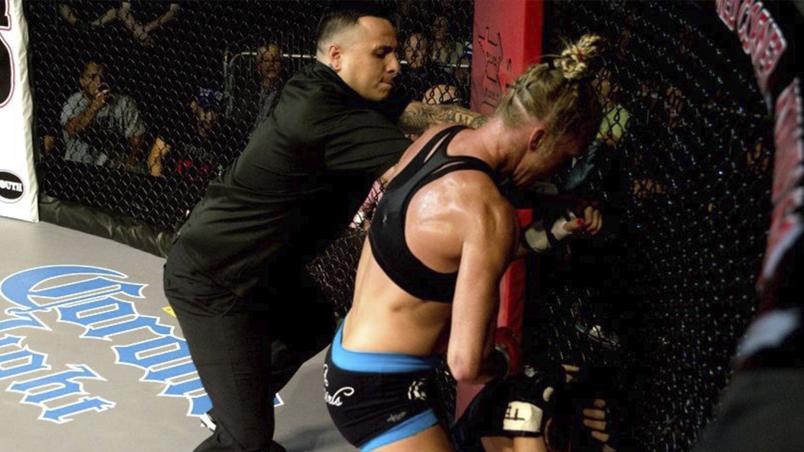 “Since the TV was there, I was kind of afraid to say anything to my coaches because I didn’t want them to video it and then the commentators to say something like, ‘Did she just say she broke her arm?’” Holm said. “Then a doctor would come in and stop the fight and I knew it was either a broken arm and a win or a broken arm and a loss.”

As a decorated boxer, one of Holm’s biggest weapons had now been taken away from her. She couldn’t express it to her corner and was now at even bigger risk of falling victim to a head kick KO.

“Finally after the third round I was able to say something,” Holm said. “What my team was telling me to do wasn’t really going along with how I was feeling because of my arm and finally nobody was right there so I told Mr. Winkeljohn, ‘Just between you and me I think my arm’s broken.’ He said, ‘How bad?’ I said, ‘I can still fight.’ At least that way our communication would be in line.”

In the fourth round, Holm showed even more fight, possibly due to the relief of telling her coaches about her injury or possibly the shift in game plan now that her coaches finally knew what they were working with. Whatever it was, something was working.

Somewhere in that fourth round, Winkeljohn was able to relay Holm’s message to coach Greg Jackson, who gave her a simple message filled with understanding, tough love and the key to Holm’s first MMA title.

“He [Jackson] he pointed at my arm and said, ‘This is already how it is and it’s already going to hurt but when she comes in I still want you to make her pay for it. Just do it,’” Holm recalls.

The re-energized Holm went into the fifth with a plan to not only win, but to finish the fight in the face of a broken left arm. With only five more minutes of the painful hell she had found herself in, “The Preacher’s Daughter” began to let the left hand loose a little more, and before you know it, a head kick took Werner down and Holm finished her with strikes on the ground.

It wasn’t the top of the mountain. It wasn’t the title she was comfortable resting her hat on, but with one arm, Holly Holm had put on a performance of a lifetime. Being willed to victory by toughness from herself and her corner, the Jackson-Wink crew expected nothing short of what their new champion delivered.

“My coaches already know what I want,” Holm said. “They know I want to win with whatever it takes so they’re on board with me. I’m glad they’re in there just encouraging me to go. It’s already broken. What’re you going to do about it at that point? You already have to go get it fixed. You might as well try and win a fight in the meantime.”

Holm would never fight for LFA again. 10 months after winning the LFA title, she found herself an undefeated prospect making her debut in the UFC against Raquel Pennington.

While she never got a chance to defend her LFA crown, Holm proved that she was one of the baddest women on the planet that Albuquerque night and gave LFA fans a performance very few human beings on the planet would ever attempt to duplicate.