Friday’s UFC Fight Night main event between heavyweight contenders Derrick Lewis and Shamil Abdurakhimov wasn’t pretty, but Lewis did get the finish at Times Union Center in Albany, stopping his foe in the fourth round.

“That was one of my most terrible fights,” Lewis said. “I didn’t like my performance at all. I know it was a five-round fight, I just tried to pace myself, but that was some bulls**t. I expected a better performance.”

A win’s a win though, and for Houston’s Lewis, it was his fifth in a row.

Abdurakhimov kept his smothering attack going in round two, drawing a restart from referee Dan Miragliotta the first time, but it didn’t deter the Dagestan native, who turned practically every Lewis misstep into a clinch or takedown. And while the fans didn’t like it, Abdurakhimov wasn’t going to stop a strategy that was working.

Lewis began to show more urgency in round three, but Abdurakhimov wanted no part of any standup exchanges. So instead, he showed off slick defense before taking Lewis back to the mat with two minutes remaining. With a minute left, Miragliotta stood the fighters up, but Lewis was unable to get close. Abdurakhimov was warned by Miragliotta for running though, which did give Lewis some hope entering the final two rounds.

As round four began, Lewis’ kicks continued to be a mistake, as Abdurakhimov was able to catch it and use it to his advantage. By the second minute though, the Russian was looking at the clock, clearly tired. Lewis wasn’t pressing enough though. With two minutes left, Lewis finally found an opening for a takedown, and once he got his foe to the mat, the ground strikes began flowing. Soon, Lewis got into the mount, and after more unanswered strikes, Miragliotta stepped in, stopping the fight at 3:42 of the fourth round. 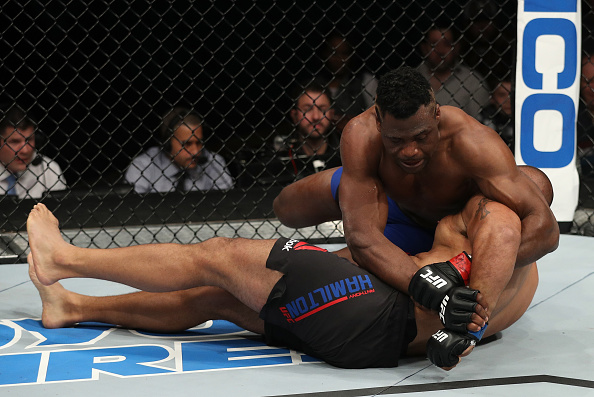 After three knockouts to open his UFC career, French heavyweight contender Francis Ngannou showed off some new tricks against Anthony Hamilton, submitting his opponent in the first round of their co-main event matchup.

Following a slow opening minute, Ngannou fired off a kick that Hamilton caught and parlayed into a takedown. Ngannou rose immediately and while the two remained locked up against the fence, “The Predator” locked in a kimura, took Hamilton to the mat and then cranked, forcing a tap out at the 1:57 mark.

No. 9-ranked light heavyweight contender Corey Anderson was in top-notch form in his bout against Sean O’Connell, winning the bout via second-round knockout. 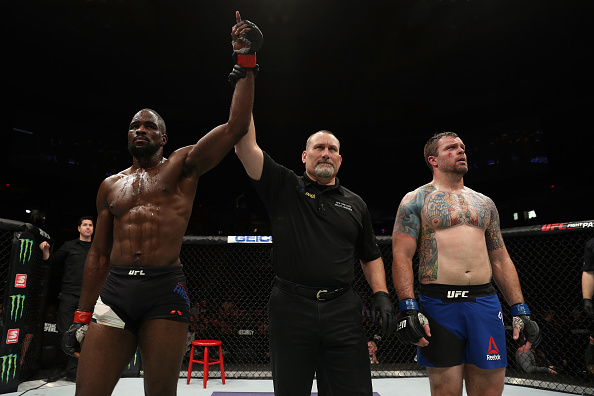 Anderson scored three takedowns in the first 90 seconds of the fight, quickly taking control of the bout. O’Connell tried his hardest to get upright through the barrage of ground strikes, but when he did with under a minute left, Anderson dumped him once more and kept him on the mat until the horn sounded.

Seconds into round two, Anderson got the bout back to the ground, and the one-sided attack continued until the midway point, when Anderson got the mount and then ended the bout with a series of unanswered strikes. Referee Todd Anderson officially stopped the bout at the 2:36 mark.

Long Island light heavyweight favorite Gian Villante got a big win in his home state of New York, but he had to dig deep for it, as he held off a furious charge from newcomer Saparbeg Safarov to score a thrilling second round TKO in the main card opener.

Villante drew first blood – literally – in the opening minute, cutting Safarov under the left eye. Safarov stayed in the pocket with the Long Islander, but the power of Villante was too much, as he hurt his foe, dropped him, and nearly finished him with ground strikes in the first half of the round. The game Safarov kept fighting and swinging for the fences, and he even got a brief break after landing a low kick. When the action resumed, Safarov apparently hurt his left leg while throwing a kick, but he kept winging haymakers, and this time he began hurting Villante, capping off a wild opening frame.

After getting a long look from the Octagonside physician, Safarov continued to wing shot from the cheap seats while Villante targeted his left leg. In the second minute, Villante wobbled Safarov with a left hook to the jaw, and the Russian began looking desperately for a takedown. He didn’t get it, and Villante began picking his shots more judiciously, eventually forcing Safarov to the fence, where an unanswered series of blows prompted referee Keith Peterson to step in and halt the bout at the 2:54 mark.