Lewis looks to bring the pain, get KO win 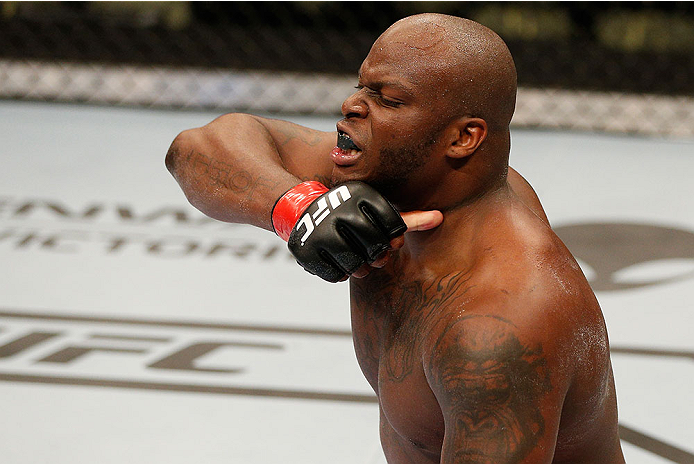 In trying to decipher the cult hero popularity of Derrick Lewis, “The Black Beast” has a decent theory.

“It’s the killer instinct I have,” the heavyweight banger said. “I’m not a boring fighter and I hate being in boring fights. I go in there for the knockout or to get knocked out. I leave it all in the cage. The next day, I don’t want to be like, ‘Woulda, coulda, shoulda.’ I just leave it all out there.”

Fair enough. And that’s part of the appeal of the Houston product, who makes his return to the Octagon on Saturday night to face UFC newcomer Damian Grabowski. But the real secret may have slipped out when discussing the lone submission win of his career in 2010.

The topic was putting on exciting fights and taking the risks necessary to get a finish versus playing it safe and taking an easier – albeit boring – win. Lewis’ response was pure gold.

Lewis did not laugh. He was dead serious. The follow-up question had to be – and was – but you got the finish. That’s not boring. Why was that the worst decision ever?

“He wanted a rematch right after it,” he said. “I like for my opponents to feel some pain, so then they won’t want no rematch.”

“He got the rematch and I knocked him out in the third round.”

There would be no requests from Mr. Cleveland for a third fight. And after four more fights, a stretch that included a knockout of current contender Jared Rosholt, Lewis was in the UFC, where he has wreaked havoc to the tune of a 4-2 record with each fight – win or lose – ending by way of knockout.

Just the way the 30-year-old likes it.

“I hate submissions,” he said. “I know all the submissions in the book; I just like the knockout better. I’ll watch the replay and I’ll see that the submission was there – the arm was there, the neck was there, but I just prefer letting the fists do the talking.”

It almost makes you wonder why Lewis didn’t pursue boxing, but he almost did, even linking up with the legendary George Foreman for a spell. But when asked about going into the sweet science full-time, he said only if he lost his first pro MMA fight. He didn’t lose. MMA it was.

Today, that money is building a future for Lewis and his family, and you would think that he might want to play it safe here and there to secure the wins and move even further up the ladder. He doesn’t think that way, and he’s confident enough to know that even if he’s getting held down for two and a half rounds, he’s always one punch away from turning any fight around.

“I like to get all my emotion and all my anger out whenever I’m hitting a guy,” he said. “It’s the best feeling in the world for me, the most satisfying.”

So what if the day comes when he walks into the Octagon happy? Will he still be the same fighter?

“I don’t think I can, I really don’t,” he said. “It’s a big part of my ability. If a guy is holding me down, I’m getting madder and madder and more frustrated. As soon as he gives me an inch, I explode and try to take his head off.”

All of this doesn’t mean Lewis is a bad guy. On the contrary, he’s one of the more affable fighters in the sport, just one whose claim to fame is knocking people out. And even then, he isn’t emotionless when it comes to his day job. He talks of his 2011 fight with Taylor Herbert.

“I did feel bad about knocking him out,” said Lewis, who only took two minutes and 14 seconds to do so. In the UFC, no one has made him feel that way yet.

“I’m trying to get everybody,” he laughs. This Saturday, it’s Grabowski’s turn. Lewis says he wants to show everybody what he can really do in the Octagon. Does that mean another submission?

“I might, just to see where it’s at,” he deadpans. “But I’m pretty sure he’s gonna want a rematch if I do, so I’ll try and knock him out.”