Lewis: If I Swing For The Fences In The First Minute You All Can’t Complain 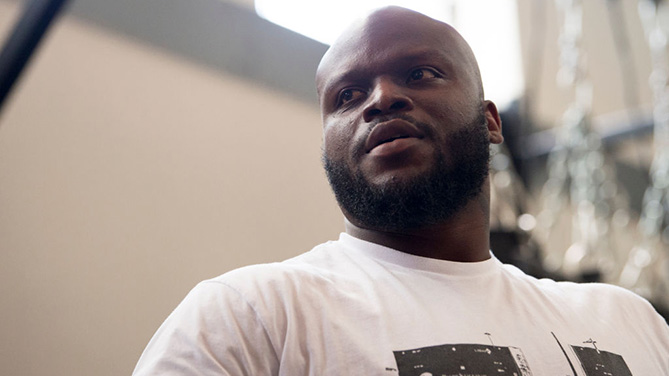 Bouncing back from a tough loss is something that most fighters experience, Derrick Lewis however has to bounce back to a tough win at UFC 226. Many people thought that his bout with fellow heavyweight Francis Ngannou would be an absolute barn burner, but it turned out to be one of those contests where nothing really happened.
Lewis would go on to get his hand raised via a decision, but following the performance he apologized to fans and vowed to put on a show the next time he entered the Octagon.
Lucky for fight fans that time is this Saturday, when Lewis meets Alexander Volkov at UFC 229 in Las Vegas, NV. Here’s what Lewis had to say about getting back on the good side of fans, his health, the match-up with Volkov and his kids watching him fight.
UFC: How are you feeling, how did your camp for this one go?
Lewis: Camp was good, pushed it a little harder than the training we did for the last fight. I believe I’m more prepared for this fight than I was for my last fight.
UFC: How are you a better fighter than you were when we saw you against Francis?
Lewis: I really just try to control my weight, usually I get up all the way to 300lbs but now I just walk around at 285lbs hopefully that shows in my speed hopefully I go Super Saiyan or something.
UFC: How do you feel about your match-up with Alexander Volkov?
Lewis: It’s a great match-up especially coming off the fight I just had. I believe he is the perfect opponent.
UFC: Do you think he is the type of fighter to bring out the dog, the fight, in you?
Lewis: I really hope so because I was really disappointed in my last fight. So hopefully this one right here stands up to par so we can just give the fans what they paid for.

.@TheBeast_UFC has big plans for the first minute of his #UFC229 fight against Alexander Volkov : pic.twitter.com/wuD1wP5eX8
— UFC News (@UFCNews) October 4, 2018

UFC: How have you been able to grow as a fighter, both physically and mentally?
Lewis: I’ve really taken better care of my body than I did in the past and just reminded myself to really push the pace and not give a damn if I get caught or what, just go in there and just swing for the fences. Especially in the first minute, so if I swing for the fences in the first minute of the fight and I gas out you all can’t complain. Don’t sit there and talk shit ‘oh he didn’t nothing the whole fight’. So if I gas out in the first minute you all are to blame *laughs*.
UFC: How is your back feeling?
Lewis: It’s good right now, still taking it day by day. I had a deep tissue massage yesterday so it’s sore from that but it’s feeling good.
UFC: What makes the people like your social media so much?
Lewis: Oh I got a crazy sense of humor so I just put out there whatever I think is funny.
UFC: Do your kids watch you fight?
Lewis: They do no matter if I win or lose my kids still make fun of me. If the guy push me down or hit me, my kids will make fun of me laugh in my face and stuff (*laughs*). So it doesn’t matter, I don’t want them to fight but I prefer them to do whatever they want to do whenever they grow up and I will try to help them the best I can.
UFC: People remember you for what you did during the floods in Houston. Does that get brought up a lot?
Lewis: People thank me for it, but I just felt like it was something that needed to be done. My house didn’t get flooded and I didn’t feel like staying in the house all day. I also had DirecTV so anytime it rained the cable wouldn’t work (*laughs*) so I just wanted to go out and help everybody.
*Make sure you tune in Saturday, October 6th live on Pay Per View to see Lewis take on Volkov. To order UFC 229 head to the link: www.ufc.com/order
Gavin Porter and Steve Latrell are writers and producers for UFC.com. You can follow them on Twitter @PorterUFCNews and @TheUFSteve.