Lewis on the hunt after earning a contract on DWTNCS 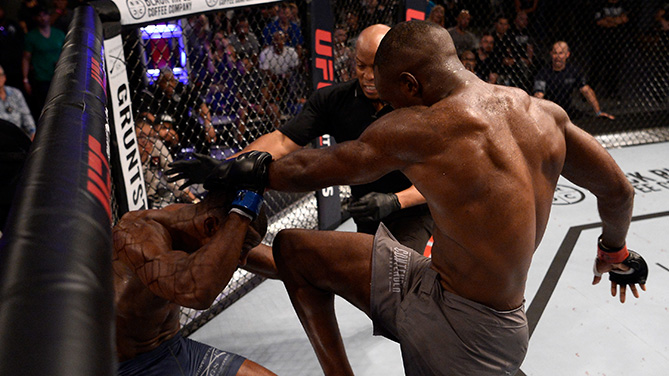 Bevon Lewis was patient. Last month that patience was rewarded with a UFC contract.
“I was just waiting to get a pair of those gloves on,” said Lewis of the four-ounce UFC mitts that he will now get to wear in the Octagon on a regular basis.
It hasn’t been one of those decade-long waits to get the call to the big show, but it may have felt longer for the middleweight prospect after a second-round stoppage of Elias Urbina on the first season of Dana White’s Tuesday Night Contender Series last August earned him a developmental deal but not the full UFC contract. Not that it surprised him.
“After that fight, I knocked him out, but I didn’t think I was gonna get it because it was my first time on the Contender Series and my record was pretty young too,” said Lewis, who moved to 4-0 with the win over Urbina. “There was a chance, but I really didn’t set myself up to be disappointed. I would have loved to been there at the time, but it’s never too late to get it started now.”
Especially since he’s only 27 years old. Of course, the time to develop further with the Jackson-Wink MMA team in Albuquerque was welcome, and he scored a decision win over Collin Huckbody in April, but yeah, a year spent in the UFC since 2017 wouldn’t have been bad, either.
“I’d be able to handle it,” Lewis laughed. “Give me it last year and the coaches and I still would take the time to make sure we were ready for the first guy, whoever it may have been. But I think it was good for them (the UFC) to see me on the series one more time. Maybe I showed them something else that they wanted to see out of me. My last fight was a little back and forth and I got the win over Elias, but this one I felt like I made a statement to say I bring fire.”
He did. After patiently turning back everything fellow unbeaten Alton Cunningham had for him on July 10, Lewis lowered the boom, stopping his foe at 3:01 of the first round. This time, there was no question that he was joining the roster. Yet this isn’t the final destination for a fighter still refining his craft.
RELATED: Watch Bevon Lewis’ highlights from DWTNCS | Lewis scores a contract
“I’m fixing all the holes all the time,” he said. “I watch my fights so I can see what I could have done to be more efficient. And in the gym, when I’m working, training and sparring, I feel that I’m getting to the point a lot quicker instead of having these long, drawn out fights. Not all of them can always be perfect, but I felt my game grow, I felt my strength grow as well – the physical strength, the mental strength – and I’ve grown a lot trusting in my coach and in myself.”
Not bad for someone who only picked up mixed martial arts in 2011 without any previous combat sports experience.

“I didn’t even wrestle,” said Lewis, who nonetheless was determined to do something in sports. What sport? That was the mystery.
“I was wondering, ‘What is out there for me?’ Baseball, football, basketball? Maybe I should go be a lawyer. (Laughs) Then I went into a gym.”
And here he is. It may have been a wild dream to begin with, but these days, Bevon Lewis believes this was his destiny.
“I feel like in a past life I could have been a hunter because right now I feel like I’m on the hunt,” he said. “You wake up and there’s a challenge in the man across the ring from you, and you have an urge just to beat somebody up. Not like a bully, but right now I’m in this moment where I just want to beat some people up. I’m hunting. And I’m ready to go.”