“I understand that he’s been hit in the head a couple of times, but he hasn’t fought nobody like me and if anything, he’s scared to fight me.”
By E. Spencer Kyte • Mar. 8, 2019

That’s how Derrick Lewis responded when I asked him how he was doing at the start of our conversation on Wednesday, a few days out from his return to the cage against Junior Dos Santos in the main event of the UFC’s debut show in Wichita, Kansas.

Normally, this would be a shocking initial admission — a revelation that required multiple follow-up questions and a reshaping of the entire interview — but with the Houston-based heavyweight who is known as much for his comedic chops as his clubbing knockout power, grousing about feeling terrible as he’s counting down the days until he gets to step into the Octagon is par for the course. 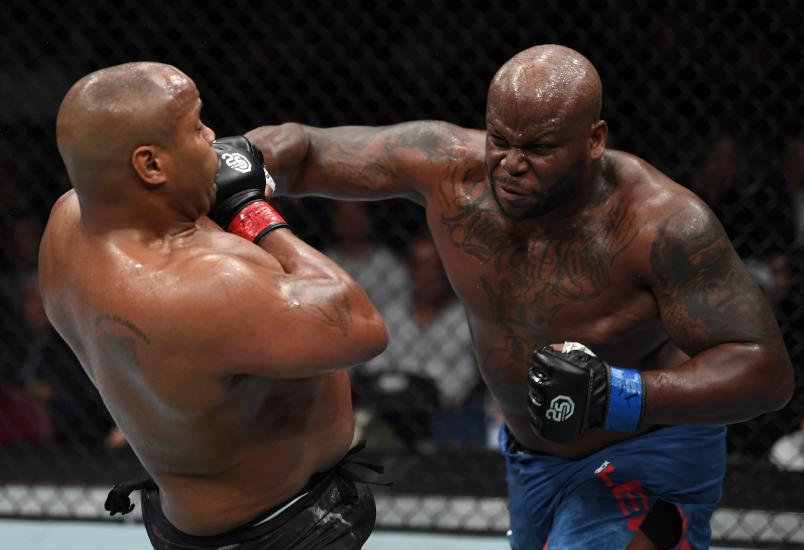 “I’m always feeling bad; ain’t nothing changed,” said Lewis, laughing when probed to make sure there wasn’t anything more than the usual annoyances and objections resting on his shoulders as he readies to return to action on Saturday night at Intrust Bank Arena. “It’s the same s***, but only it’s in Wichita now and there is snow on the ground.”

Last year was an odd and hectic year for the 34-year-old heavyweight, who entered 2018 looking to get back into the win column after having his six-fight winning streak snapped by Mark Hunt in his lone appearance during the 2017 campaign.

FIVE QUESTIONS WITH DERRICK LEWIS | LEWIS: "I'M GIVING IT MY ALL" | FREE FIGHT: LEWIS VS TYBURA

After delivering a typical “Derrick Lewis-type” performance against Marcin Tybura in front of the Texas faithful in February, when he powered out of several takedowns and tilted the fight in his favor with a single clubbing blow midway through the third before finishing moments later, the fan favorite lobbied for an opportunity to share the cage with recently beaten title challenger Francis Ngannou.

His request was granted and the fight landed as the co-main event at UFC 226 in Las Vegas, but rather than the explosive clash between menacing heavyweights with vicious power everyone expected, it turned into a 15-minute staring contest where Lewis was slowed by lingering back issues and Ngannou was unable to pull the trigger. Lewis came away with the victory, but the best exchanges between the two ended up coming the day before at the weigh-ins when they both engaged in a spirited shoving match.

Eager to make up for his rough showing during International Fight Week, Lewis jumped at the opportunity to face surging Russian Alexander Volkov three months later at UFC 229. With 30 seconds to go in the contest, it looked like “The Black Beast” was on his way to a unanimous decision loss, but then Volkov stepped forward with his hands down and walked into a clubbing blow that put him on the canvas and left Lewis standing in the center of the Octagon without his fight shorts on, his hand raised in victory and his winning streak extended to three.

A month later, he faced Daniel Cormier for the UFC heavyweight title in the main event of UFC 230 at Madison Square Garden in New York City. It was the culmination of a long, strange trip that started when he was released from prison and pursued a career with his hands in order to put food on his family’s table, and though things didn’t go his way, it was still a reminder that despite all the jokes and sarcasm, the soft-spoken, heavy-handed heavyweight was still a true force inside the cage.

“I didn’t fight like myself,” said Lewis, reflecting on his second-round submission loss to Cormier. “I should have been more explosive with getting up from the takedowns.

“I was real hesitant when I was getting up and whenever I was being hesitant, he took advantage of getting my back like that. I got caught in a bad spot and rather than doing what I usually do, I was a little slow.”

While the sardonic wit that prompts him to declare he’s terrible right out of the gate makes him good for a laugh, Lewis has always been brutally honest in his assessment of his own performance and the way he approach the fight game, which resides at the other end of the spectrum from most of his contemporaries.

Where the majority of fighters get an extra jolt of excitement from potentially being the first to topple an undefeated opponent or defeating a big name foe, none of that has ever really mattered to Lewis, who has the chance to beat a former titleholder on Saturday.

“It’s just a regular fight to me,” he said about squaring off with Dos Santos, who enters this weekend’s main event on a two-fight winning streak. “I don’t care about all the accolades or stuff like that about fighting. I don’t worry about those things. It’s all about taking care of my family.”

He does, however, take pleasure in listening to some of the things his opponents have to say in the preamble to their bouts because with his pragmatic, bordering on pessimistic personality and hard-scrabble past, hearing someone suggest that he’s scared to step into the cage and trade leather with them as Dos Santos has done in advance of their meeting on Saturday prompts the big man to let out a deep baritone belly laugh.

“He said that I’m scared of him?” he asked, clearly amused by Dos Santos’ hypothesis. “He’s crazy.

“I understand that he’s been hit in the head a couple of times, but he hasn’t fought nobody like me and if anything, he’s scared to fight me.”

While the last piece is just a little bit of schoolyard gamesmanship, the preceding point is well founded because there really isn’t anyone like Lewis in the heavyweight division.

As much as everyone carries fight-ending power to a certain degree, few brandish the same one-punch knockout ability throughout the fight the way that Lewis does, with his last-second, one-shot finish of Volkov giving credence to those claims. It makes Lewis a special kind of threat and one that is difficult to prepare for because even when you do everything right, there is still a chance he could hit you with the lunchboxes packed with dynamite that he calls his fists and snatch a victory from the jaws of defeat.

And while some may look to Cormier’s approach as a blueprint for beating Lewis and aim to replicate his takedown-heavy approach, there are two things to keep in mind when contemplating that strategy: first, Daniel Cormier is on a different planet than every other heavyweight when it comes to wrestling, and secondly, as Lewis put it, “That’s a risky thing for them to do because if I get on top of them, it’s over with.”

While the strategy Dos Santos will deploy on Saturday night is unknown at this time, Lewis’ approach never changes.

From the word “Go” until the fight is over, the big man will be “swangin’ and bangin’,” looking to put one of his giant paws on the former champion’s chin so he can hurry up and get back home to his wife and kids.