Following a one-week hiatus for International Fight Week, the action returned to the TUF Gym on Tuesday night for Week 4 of Dana White’s Tuesday Night Contender Series, with 10 new hopefuls battling it out for a chance to earn a UFC contract.

To say Season 2 has been action-packed thus far would be an understatement, as the initial three weeks resulted in 14 of the 15 bouts ending inside the distance and eight fighters being awarded contracts. Last time out, flyweight Antonina Shevchenko joined her sister Valentina on roster by collecting a second-round stoppage win over Jaimee Nievera that showcased her Muay Thai pedigree, while MMA Lab prospect Te Edwards needed just 28 seconds and one clean punch to dispatch Austin Tweedy and earn a call up to the big leagues.

This week, five more pairs of fighters hit the Octagon eager to keep things rolling, including a pair of fighters who earned victories in Season 1 and several other promising prospects.

After handing out a bushel of contracts to begin the season, two more fighters were added to the roster as returning winners Jordan Espinosa and Bevon Lewis both made good on their second chances, securing a call-up to the UFC.

One of the top emerging talents in the sport, the reigning LFA featherweight champion Aguilar accepted this fight on short notice and entered on a six-fight winning streak that included stoppages over Thanh Le and Damon Jackson. Fighting out of Boss MMA in Hilo, Hawaii, the 28-year-old Gomez entered with a perfect 7-0 record with six finishes.

Despite sporting a cut in his hairline from a clash of heads, Gomez landed the first big shot of the fight, hitting Aguilar with a right hand following a failed takedown attempt. A minute later, he had to the fight on the floor, posturing up in Aguilar’s guard, landing elbows and punches. Back on the feet and both leaking blood, the duo traded attacks, properly countering the other’s offerings through to the horn.

Both came out swinging to start the second and it was Aguilar who got the better of it, clipping Gomez and sending him down to a knee, opening the cut on his hairline and causing the claret to flow freely. A straight right two minutes in landed clean, but Gomez responded by driving through a takedown, getting Aguilar on the fence with his head pressed up against the fence.

After catching his breath, Gomez looked to posture up and land, but Aguilar did a good job of tying him up and not affording him any space to work. With a minute left, they were back in the center of the Octagon, blood and sweat dripping down their bodies. and the horn sent them to the third and final round.

The final five minutes started with a touch of gloves and Aguilar offering a kick before finding a home for a looping left hand. A straight left followed and stiffened Gomez up, but Aguilar wasn’t able to capitalize, though he continued to be the aggressor and land with the occasional short shot while Gomez offered very little.

With a minute to go, Gomez started coming forward more and Aguilar stuck him with a clean right hand in the mush. Two left hooks followed and were joined by two more in the final 10 seconds before this one was turned over to the judges.

Returning for a second appearance on the Contender Series, Lewis impressed last season with a second-round TKO victory over Elias Urbina, but was told to get a few more fights under his belt.

After picking up a win in April, the Jackson-Wink MMA product came back hoping a second victory would earn him a contract. Standing in his way was Cunningham, a 25-year-old Wisconsin native with five stoppage wins in as many appearances.

Mark Smith was in the cage with the middleweight hopefuls.

Right out of the chute, Lewis connected with a right hand before quickly closing the distance and scoring in the clinch with some dirty boxing along the fence. Seeing him in the cage, it’s striking how much Lewis resembles Jon Jones, both physically and in the way he fights.

Along the fence just over two minutes in, Lewis rocked Cunningham, sending him to the canvas and while he got back to his feet, two massive knees brought the fight to a close.

Official Result: Bevon Lewis def. Alton Cunningham by TKO (knees) at 3:01 of Round 1 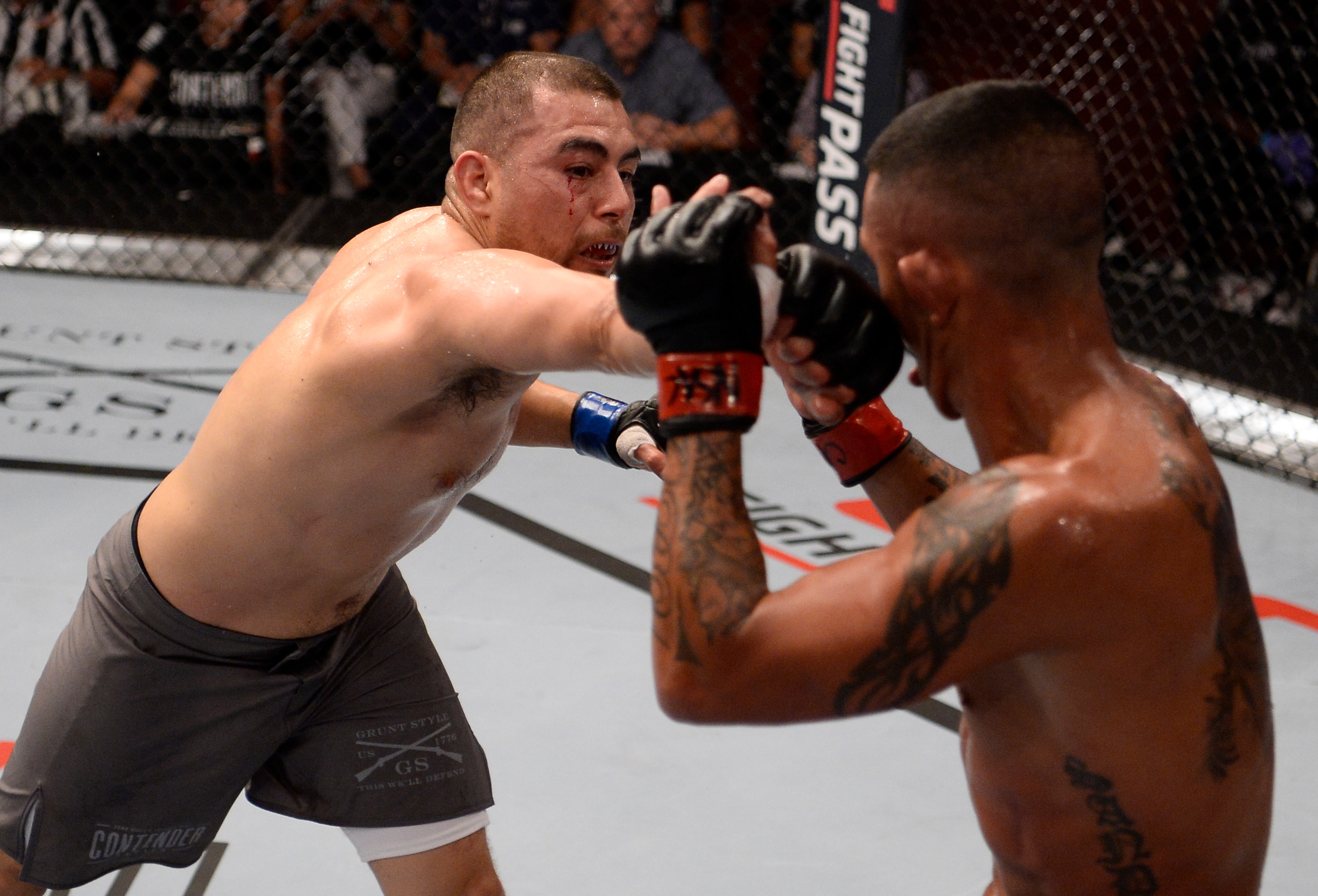 Veteran lightweights clashed in the swing bout on Tuesday’s fight card. The second of three Hawaiians competing on Week 4, Misech trains alongside Rachael Ostovich and arrived with wins in four of his last five outings, while Palacios rolled into Las Vegas on a six-fight winning streak, most recently dispatching Diaz Brothers training partner Chris Avila.

Herb Dean joined the lightweights inside the Octagon.

Misech closed the distance right off the bat, but it was Palacios who landed the first good shot, burying a hard kick to the midsection. Following a couple minutes of feeling each other out and finding their range, Misech started to find a home for his left hand before eating a right hand that buckled his knees. Two more right hands from Palacios got through before the horn brought the first to a close.

Once again, it was Misech taking the center of the cage and pressing forward, with Palacios content to wait for his openings. After crashing home another heavy body kick, Misech responded with a right hand before an errant kick below the belt brought the fight to a momentary pause.

Restarted, Misech continued to press Palacios, finding a home for the straight left hand, twice up top and once to the body. While Palacios’ pace slowed, he continued to land with kicks to the body and the legs, keeping Misech from crashing in without caution, including one just before the end of the round.

RELATED: Miss Week 4? Watch it Right Now on FIGHT PASS!  |  A Fight for the Fans

Just as it was in the first two rounds, Misech closed the distance to start and opened up with his hands, only to be met by Palacios as both men showed a greater sense of urgency as the final five minutes ticked off the clock. Just prior to the midway point, Misech started hunting for a takedown, but Palacios stuffed it easily and started going on the offensive. While nothing of great substance landed, it was the Texas native throwing and landing more down the stretch.

Espinosa finishes it with SECONDS left in third round!

After choking out Jackson-Wink prospect Nick Urso in the first round of their Week 7 clash last season, Espinosa likely thought a contract was coming his way, but it wasn’t meant to be. He’s since added another win over another Contender Series alum, CJ Hamilton, to push his record to 12-5 with 1 NC.

Referee Mark Smith with the assignment in this one.

It didn’t take long for Espinosa to get this one to the ground, shooting in right out of the gate, moving to side control and hunting for the same modified anaconda choke that he used to finish Urso. Dutro shook free and they returned to the feet, where Espinosa popped home a couple clean left hands.

The Hawaiian was undeterred and continued to stalk forward, dropping Espinosa with a clean shot, but a moment later, Espinosa returned the favor, wrapping up a really entertaining opening five minutes.

Starting the second with a big right hand, Espinosa wasn’t as quick on his feet as he was in the first, telegraphing an early entry that Dutro stuffed easily. But the Albuquerque-based flyweight continued to counter well as Dutro pressed forward, popping him with left hands as he circled out of trouble. Late in the frame, Dutro connected with a clean left of his own, but Espinosa wore it well and for the first time since the opening bout of Week 3, a Contender Series fight went to the third round.

Less than a minute into the final frame, Espinosa shot in for a takedown, but Dutro dutifully turned him back, keeping the fight standing. With the Hawaiian pressing forward, looking for an opening to land, Espinosa quickly fired off a right hand that froze Dutro in place, teetering on the brink of being finished. Somehow, Dutro survived the follow-up blows, got back to his feet and resumed stalking Espinosa, trying to goad him into a brawl.

The Luttrell MMA product wasn’t having any of it though and just before the final horn sounded, he dropped Dutro with another counter left, bringing the fight to a close just seconds before the bell.

Official Result: Jordan Espinosa def. Rilley Dutro by TKO (punches) at 4:58 of Round 3

Aptly nicknamed “The Tarantula,” the 23-year-old Turner is huge for the lightweight division, standing six-foot-three and brandishing a 75.5” reach. Following a .500 start to his career, the Adrenaline Combat Sports representative entered Tuesday’s opener with stoppage wins in four of his last five.

An Armed Forces veteran who started training while on still on active duty, Mustaki brought a brown belt in Brazilian jiu-jitsu and five stoppage victories from six career wins into the Octagon for his showdown with Turner.

Herb Dean was the third man in the cage with these lightweights.

Just over a minute into the fight, Turner wobbled Mustaki with a clean left hand, following up 30 seconds later with a body shot that put him on the canvas. While he couldn’t find the finish, another kick to the body shortly after caused Mustaki to grimace and Turner to swarm, but the scrappy veteran started firing off heavy counters and survived to finish the round.

Following the break, however, the ringside physician called off the fight as Mustaki’s right foot was severely swollen and appeared to be broken. It wasn’t the way Turner wanted to get the stoppage, but it was an impressive performance nonetheless.