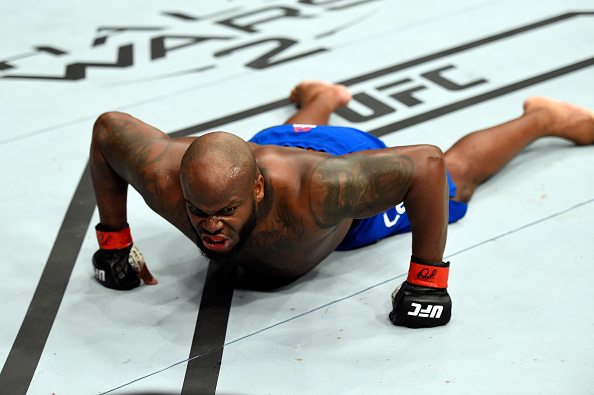 The UFC Fight Night main event started out well enough for Travis Browne, but it was Derrick Lewis who closed the show Sunday night at Scotiabank Centre in Halifax, as he scored a come from behind second-round knockout win in a clash of top ten heavyweights.

“I just knew I had a bigger heart than him,” Lewis said.

After trading kicks in the opening minute, Browne fired off a front kick that hurt Lewis to the body. Grimacing from the strike, Lewis fired off a wild right hand but didn’t land. Browne remained composed, but soon, Lewis threw two flashy kicks and followed up with a right hand that put Browne on the deck briefly. Once Browne got to his feet, he went back to the body and again hurt the Houston product, forcing him to clinch.

In the first minute of round two, Browne missed a high kick and that was all Lewis needed to surge back into the fight, as he backed “Hapa” into the fence and hurt him with a barrage of shots. Browne covered up and told referee Mario Yamasaki that he was okay, but when he tried to take Lewis down, it was “The Black Beast” who ended in the top position. Now the fight was in Lewis’ world, and with more than two minutes left, it wasn’t looking good for Browne. Browne did make it back to his feet, but a right hand put him down, and this time, Lewis ended matters with a barrage of shots that forced referee Mario Yamasaki to halt the bout at the 3:12 mark.