Where will the Weidman-Silva and Rousey-Tate rematches fall on this list? 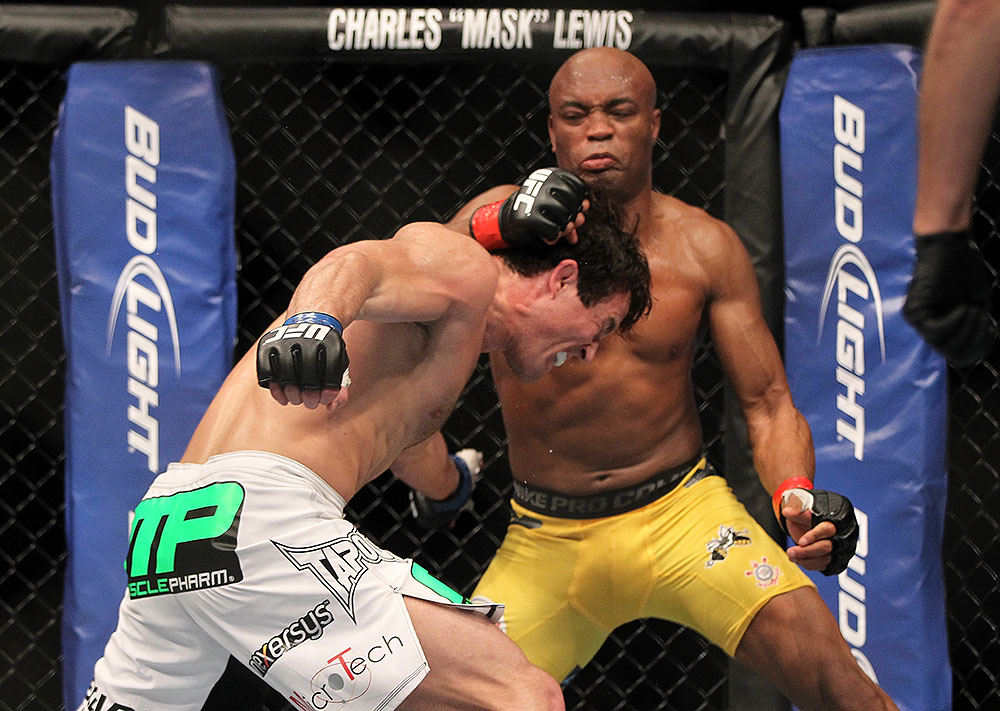 On Saturday, December 28, UFC 168 will feature two highly-anticipated rematches, as Chris Weidman battles Anderson Silva and Ronda Rousey takes on Miesha Tate. If we’re lucky, these showdowns will join the ten return bouts below as two of the best in UFC history.

Chuck Liddell-Randy Couture II
For nearly two years, Chuck Liddell patiently waited for a shot at redemption for his upset 2003 loss against Randy Couture. At UFC 52 in April of 2005, he got it, and with his trademark right hand, he exorcised his demons with a spectacular finish of “The Natural” to win the UFC light heavyweight championship and begin the legendary reign of “The Iceman.” Order Liddell vs. Couture II.

Matt Hughes-BJ Penn II
More than two years after BJ Penn shocked the world and took the UFC welterweight title from Matt Hughes, the two met again at UFC 63, with Hughes holding the belt and Penn looking to snatch it from him. And like their first bout, Penn dominated early, nearly submitting Hughes a second time in round two. But Hughes, who later brushed off the hole he was in by saying he knew he had three rounds left, needed only one more stanza, as he caught Penn on the ground and pounded away until the fight was stopped in the third. Order Hughes vs. Penn II

Matt Hughes-Frank Trigg II
Despite beating Frank Trigg in 2003, UFC welterweight champion Matt Hughes was almost destined to have the brash contender as a foil, and in 2005, they would meet again. This time, Trigg would seemingly be seconds away from victory after an inadvertent low blow allowed him the time he needed to get a rear naked choke around Hughes’ neck. But in one of the most memorable sequences in UFC history, Hughes broke free, picked up Trigg, marched him across the Octagon, and then slammed him. Hughes then sunk in his own choke, producing a tap out, a win, and an instant classic. All in four minutes and nine seconds. Order Hughes vs. Trigg II.

Brock Lesnar-Frank Mir II
For the landmark UFC 100 event in July of 2009, the premier promotion in mixed martial arts needed a worthy headliner, and they got it in the rematch between heated rivals Brock Lesnar and Frank Mir. In Lesnar’s UFC debut, Mir handed him his first pro loss, and now as heavyweight champ, Lesnar wanted more than a little dose of payback. He got it, stopping Mir in the second round to retain his crown and cap off one of the most memorable nights in UFC history. Order Lesnar vs. Mir II.

Spencer Fisher-Sam Stout II
A fight doesn’t always have to have a title up for grabs, a legacy on the line, or a compelling pre-bout storyline to be great. Sometimes, pride and bragging rights are enough, and in their 2007 rematch, Spencer Fisher and Sam Stout bit down on their mouthpieces and slugged it out for three intense and unforgettable rounds. How these two lightweights took heavyweight-level power shots and kept moving forward still amazes to this day, and though it was “King” Fisher evening the score with the Canadian via decision, “Hands of Stone” Stout was no loser. Order Fisher vs. Stout II.

Georges St-Pierre-Matt Hughes II
Georges St-Pierre more than earned a second title shot at the first man to beat him, Matt Hughes, after five straight wins against top-notch competition, and he was a different fighter than he was two years earlier. Hughes, one of the strongest fighters ever to step into the Octagon, found that out early on when he tried to lock the challenger up and St-Pierre tossed him away with little if any effort. By round two, the result was academic, and when the Montrealer dropped Hughes with a kick to the head in round two, seconds later a new welterweight champ was crowned. Order St-Pierre vs. Hughes II.

Georges St-Pierre-BJ Penn II
Nearly three years after their first bout, Georges St-Pierre and BJ Penn locked horns again in THE superfight of 2009. Only this time, it wasn’t a 15 minute back and forth war. The second time around, St-Pierre, bigger and stronger than Penn – who was coming up from 155 pounds for the bout – was in control for four rounds until the Hawaiian’s corner decided that they had seen enough and halted the fight before the final stanza. After all the bad blood and trash talk before the match, it was one of St-Pierre’s most satisfying victories and one that entrenched him in the upper reaches of the mythical pound for pound list. Order St-Pierre vs. Penn II.

Frankie Edgar-Gray Maynard II
After a 2008 decision loss to Gray Maynard, UFC lightweight champion Frankie Edgar was thrust back into the underdog role for their 2011 rematch, and in the opening round, the oddsmakers looked to be right on the money as Edgar was dropped multiple times and seemingly on the verge of being finished by the heavy-handed Maynard. But with the heart of a champion, Edgar not only battled his way back, but arguably won the next four rounds. A draw verdict was the one rendered at the end of the fight though, allowing Edgar to retain his crown. Order Edgar vs. Maynard II

Dominick Cruz-Urijah Faber II
The grudge between bantamweight stars Dominick Cruz and Urijah Faber was real, so before their UFC 132 main event in July of 2012, there was a fear that the fighters wanted so badly not to lose to their rival that they would be too cautious. Not a chance. Instead, Cruz and Faber fired off all their tricks at one another, fought at the insanely high pace 135-pounders are known for, and gave the fans a 25-minute fight to remember that Cruz won by unanimous decision. In the process, he evened the score with the only man to ever beat him, and also set the stage for an Ultimate Fighter 15 coaching stint for both.

Anderson Silva-Chael Sonnen II
For pure drama, the rematch between middleweight boss Anderson Silva and number one contender Chael Sonnen at UFC 148 in July of 2012 was hard to top. The build up to the fight was epic, and as soon as Sonnen took Silva down seconds into the bout, the crowd at the MGM Grand Garden Arena erupted and the fans didn’t stop until the end came in the second round with Silva on top via TKO. Between those two moments, Sonnen dominated on the mat in the opening frame before Silva rebounded in the second like only he can. Nearly two years of anticipation preceded this championship match, and the end result lived up to the expectations. Watch Silva vs Sonnen II Free!!