“Getting the UFC belt around my waist is my goal, but I realize that to achieve that goal, I need to focus on each step between now and then." - Carlos Condit 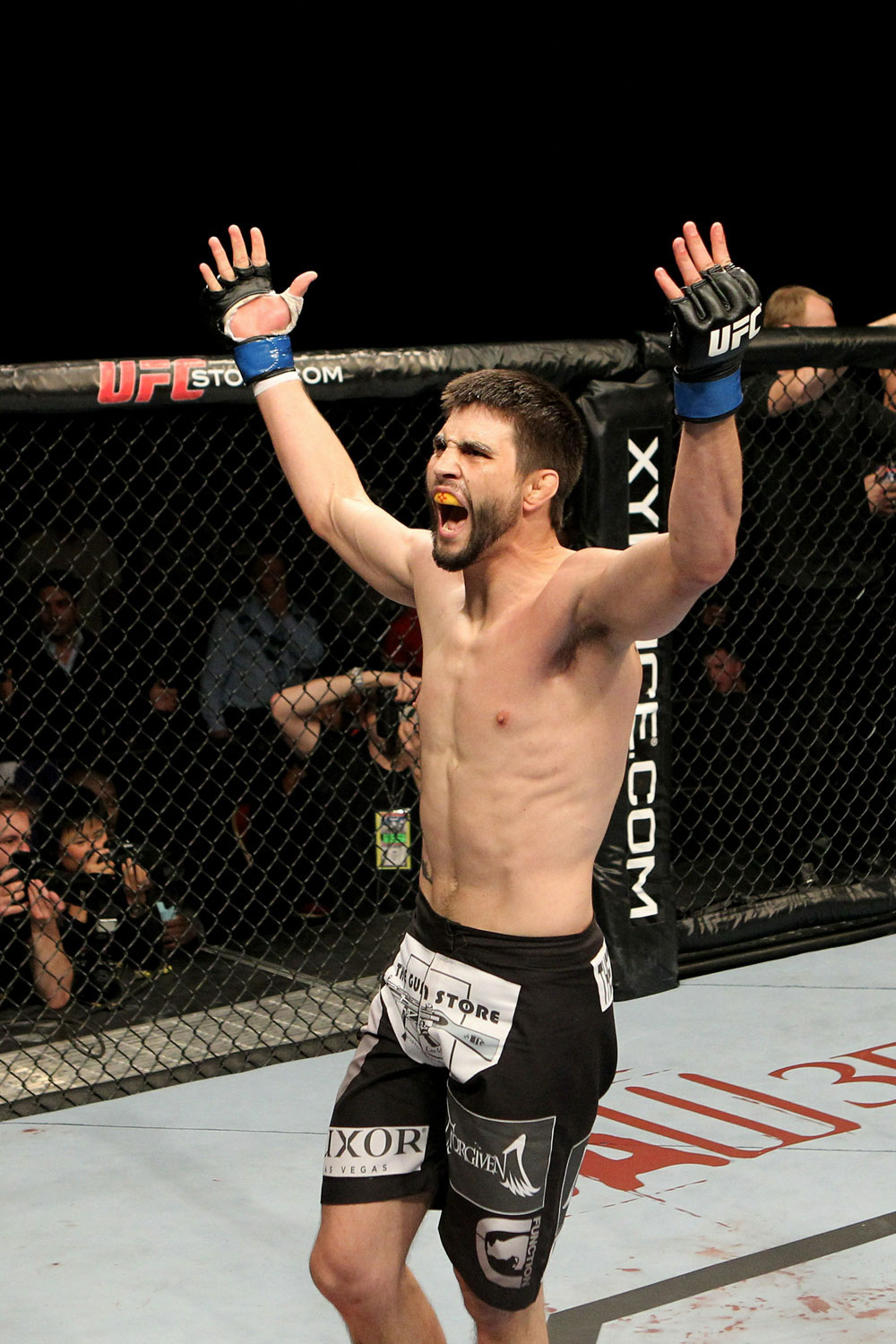 Let’s just say that after watching their charge, welterweight contender Carlos Condit, bite down on his mouthpiece, toss a well-thought out gameplan to the side and go to war, that it’s a pre-emptive strike against the inevitable hair being torn out of their heads in frustration.

“It’s definitely a tug of war,” laughs Condit. "I train with Greg and Mike, who are renowned for game planning and strategy, and I like to go in there and mix it up. But I think we found a nice balance and kinda met in the middle, and taking their approach and taking my approach we found a dangerous combination. Greg has known me since I was 15 years old, and he knows that’s just who I am and how I fight. He’s not going to try to change that, but he’s going to try to channel that into a direction that’s going to make me successful in the cage.”

It’s worked. After returning to his first trainer (Jackson) in 2009, following a long absence, Condit scored a come from behind TKO of Canadian phenom Rory MacDonald and then delivered a Knockout of the Night performance against Dan Hardy. All the while, he’s benefitted from the never-ending array of top-notch training partners, as well as Jackson and Winkeljohn’s strategic expertise. He hasn’t lost the fire that put him on the map in the first place though, and that will never burn out.

“Some guys feel like as long as they play it safe in the cage and have a conservative game plan, then they’re safe,” said Condit. “My philosophy is I’m not safe in that cage until my opponent is not moving anymore, until the ref says ‘no more.’ That’s when I’m safe. So I step in there and I try to finish the guy, and that’s when I feel like I’m out of danger.”

What was starting to wear on “The Natural Born Killer” before his move back home to Albuquerque was the grind that comes along with being a pro fighter for nearly a decade. What used to be exciting was now mundane, and even the simple task of going for his daily workouts became a chore.

“I have been at points in the past when I’ve been burned out, but at that point I switched training camps,” he said. “I had been doing the exact same thing with the exact same training partners for years and years and years, so sometimes just going down to the gym was so monotonous, it was ridiculous. Now I’m at a point in my career that I feel so fortunate doing what I’m doing. I still love to fight, I love getting up and going to the gym every single day, and I get to train all day for a living instead of punching a time card. So my perspective on things changed quite a bit, and I just really enjoy it again.”

Winning cures a lot of ills too, and since June of 2006, Condit has only lost once, a close split decision defeat in his UFC debut at the hands of Martin Kampmann in 2009. But as he points out, the setbacks he’s had over the years (just five in 31 pro MMA fights) have been just as important as the wins. But he points to a non-MMA bout, a Shootboxing contest with Dutch star Andy “The Destroyer” Souwer in 2003 as a true turning point.

“When I was 19 years old I fought Andy Souwer in a standup match, went five rounds with him, and just got my ass kicked all over the mat,” he said. “But I stayed in there and I learned something about myself that you’re not going to break me mentally. As long as my body can keep going, my mind is definitely still in it.”

In other words, you need a little humbling before you can truly move forward.

“I think so,” said Condit, whose only pro defeats have come to Kampmann, Carlo Prater (later avenged), Satoru Kitaoka, Jake Shields, and Pat Healy. “I have greatly benefitted from my losses, probably more so than a lot of my wins. It builds you as a fighter. You have to be forged in the fire before you’re hard enough to stand with the big boys.”

He’s in there now, standing and swinging with the welterweight division’s best. And despite being the WEC’s last welterweight champion, with a reign of 17 months and three title defenses, he didn’t feel like he was hitting on all cylinders when he made the move to the UFC.

“When I started (in the UFC), my first couple fights I don’t feel like I was fighting up to my ability and I’d been trying to find a home as far as a training camp,” he said. “And my last couple fights, I finally got that figured out and I started to show glimpses of what I’m capable of.”

In the MacDonald fight, he showed off resilience, a veteran’s guile, and frighteningly effective finishing skills. Against Hardy, his standup and power was on display as he finished “The Outlaw” in the first round, and this Saturday, he has another interesting assignment in unbeaten Korean contender Dong Hyun Kim.

“It is a tough fight in that Kim is less well-known, but he’s a very, very tough fighter,” said Condit. “I’m gonna do what I do either way.”

So even with a fighter like Hardy holding a bigger name in the sport than Kim, Condit’s plan of attack is unchanged.

“I’m gonna make him famous,” he smiles, “but it’s gonna be on my highlight reel.”

Confident, but not cocky, the 27-year old Condit already has the WEC title belt in his possession. The next step is the UFC championship, but he’s not allowing himself to look that far ahead. That’s what losses, setbacks, and graduation from the fight game’s school of hard knocks will teach you.

“I’ve never been handed anything in my life, I’ve had to work hard for everything, and that’s what I intend to continue to do,” he said. “Getting the UFC belt around my waist is my goal, but I realize that to achieve that goal, I need to focus on each step between now and then, instead of focusing on a title fight or something in the future. I really try to focus on my next training session and putting as much intensity as I can here and now into the present so that I can make that a reality in the future.”