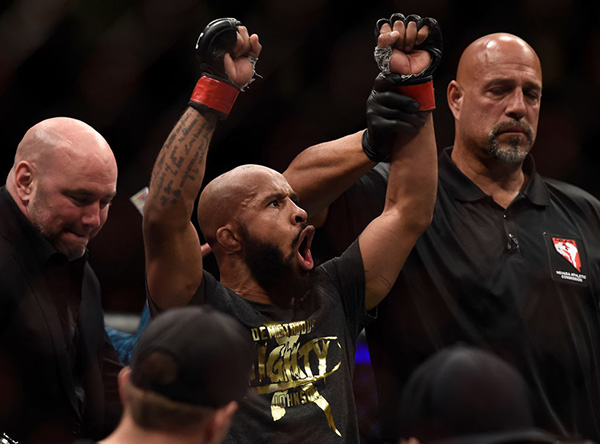 Just one day before he vanquished Ray Borg for an eleventh and record-breaking defense of his flyweight belt, and after taking selfies and signing autographs with every single fan in attendance, the ever-accessible Demetrious Johnson spent his obligatory few moments with the media following open workouts for UFC 216. He wasn't sure why. He asked openly what they could possibly have to ask him. After all, his appearance at UFC 216 as the co-main was a mere backup plan to scrapped bout that should have headlined UFC 215, meaning these media appearances had ostensibly been going on for two months, what new was there left to say?

But one question did seem to capture his imagination, if only for a moment. With a win, given his humble approach, would he even be able to allow himself to enjoy his new record? He stared into space for a moment and tried to imagine what that would look like.

"I'll get to my new house...turn on the fireplace...have a delicious beer in my hand and be like "ah, this is what it feels like."

But like a needle suddenly being dragged mid-song across a record, Johnson snapped back to reality and acknowledged that he might not be given the chance to enjoy it. "The media doesn't give you a chance to celebrate your wins," he lamented, "It's not like the Super Bowl. It's right on to the next one."

His point is well taken. From professional prognosticators to armchair enthusiasts, a love of matchmaking runs deep among fight fans. Part of it is a natural, primal curiosity to see which champion can best all the others. Part of it is the fleeting experience of the fight itself; a fight can last minutes or seconds, and the best ones leave audiences hungry for the sequel.

But in a sport where literally everyone eventually loses, Johnson's accomplishment is a more than ample reason to pause and celebrate. He stands alone as the best pound for pound MMA fighter in the world. 13 consecutive wins. 11 consecutive title defenses. GOAT. All of it accomplished not by luck or by brute force, but rather a determination to outwork, out-study, and out-maneuver his opponents. If anyone has earned the right to carry himself with the swagger and bombast of some of his fellow fighters, it's DJ, but that's not likely to happen. 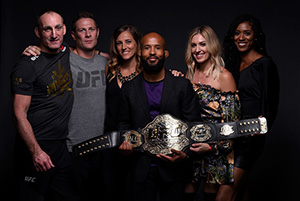 "You see a lot of guys get the belt, and they get flashy, they start wearing sunglasses indoors and all this other [stuff]," he mused. "I was working in a warehouse making $10.76 an hour, and I'd tell my boss I had to run home to use the toilet, and I'd go home to watch Joseph Benavidez fight Dominick Cruz. I'll never forget those days, because that's what makes me appreciate where I'm at now...I never forget the days where I was the guy on the other side of the TV screen watching other guys fight."

We live in a society that celebrates its athletes. In 2017 alone, we've witnessed Tom Brady take home his fifth Super Bowl ring and Serena Williams set the record (23) for Grand Slam singles, more than any other man or woman. Unlike Brady and Williams, Johnson's moment in history is unlikely to set off a similar storm of morning show appearances and Sportscenter retrospectives. But it should. And short of that global recognition, could we all agree to at least let him enjoy that beer in front of his fireplace before we ask the dreaded question "What's next"?