Brock Lesnar has never been a woulda, coulda, shoulda kind of guy. Whether in amateur wrestling, professional wrestling, a brief stint trying out for the NFL, or in mixed martial arts, he’s always chased after what he wanted. And whether he got it and tore through it for all it was worth, or came up short and moved on, there was never time to think about the past.

Until now. As the former UFC heavyweight champion gets ready for his return to the Octagon to face Mark Hunt in the co-main event of UFC 200 on July 9, he does refer back to his first run in MMA and wonders if there were things he could have done differently.

“The last couple fights, from (Shane) Carwin to (Cain) Velasquez to (Alistair) Overeem, aren’t very fond memories,” Lesnar said. “In my mind, it was just a struggle to be healthy and a struggle to be in the right mindset. I should have stepped away from the Octagon and let my body and my mind heal and become one again. But that fighter inside of you just doesn’t want to quit. And so for years, I pondered it and wondered.”

Don't miss out! Get your tickets for one of or all the events coming at you on International Fight Week

Wondered if those last two losses to Velasquez and Overeem could have gone a different way, if he wouldn’t have taken a five-minute thrashing from Carwin before scoring one of the great comebacks. They’re all valid reflections, especially since the toughest opponent Lesnar fought during his 2008-2011 time in the Octagon didn’t have gloves on. 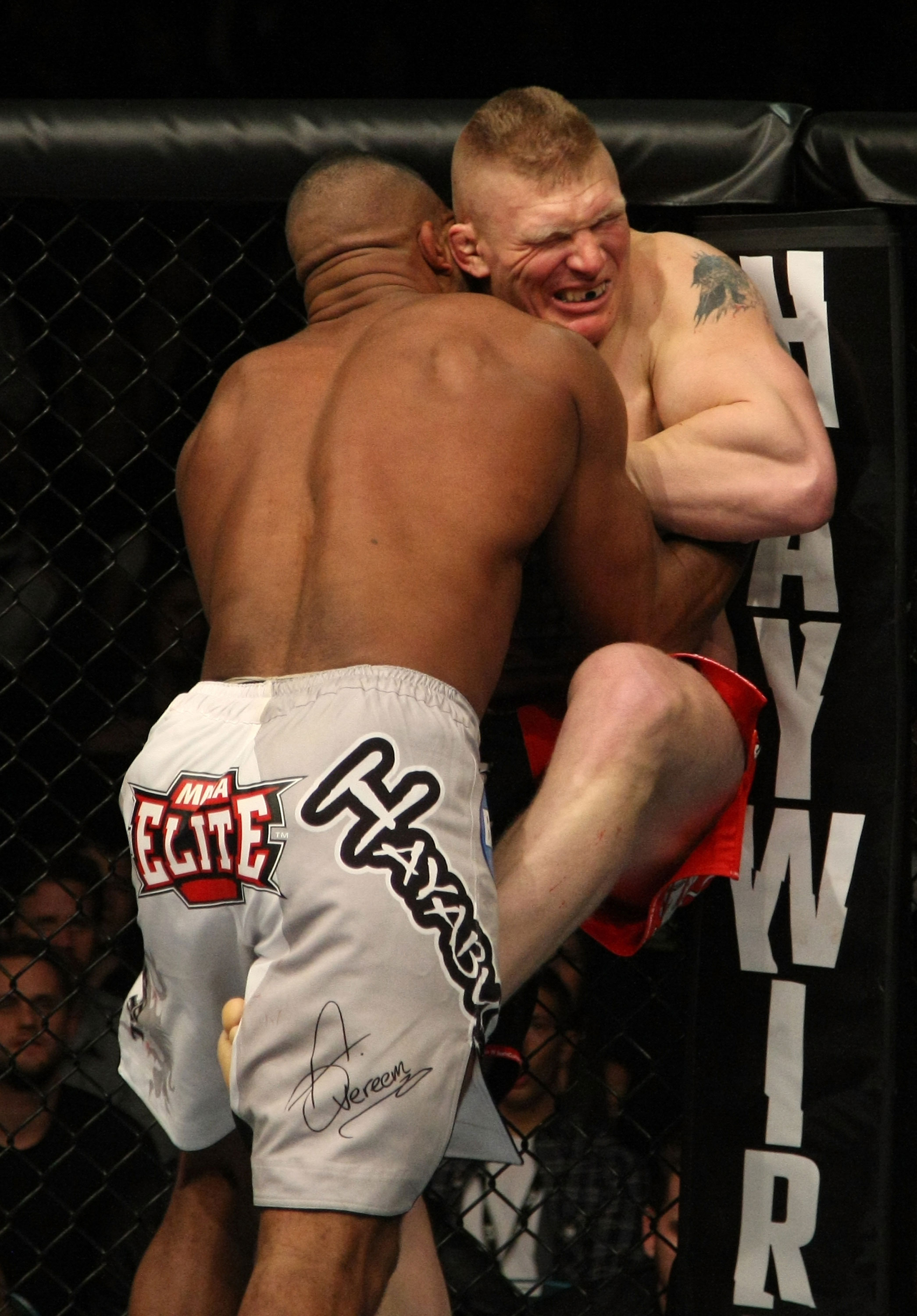 Those two bouts with diverticulitis floored Lesnar and left a lot of “What Ifs” when he left the sport after the loss to Overeem in December of 2011, and most believed those questions would never get answered. At first, even Lesnar thought that chapter in his life had ended. Then he got healthy again.

“I knew I needed some time away from the fight game,” he said. “I needed time away from it when I first got sick, but I just didn’t listen to myself. So it (a comeback) was always in the back of my mind. I thought that maybe it was over, and I wanted to get back in, but I wanted it to be the right timing. Of course, I had other things going on in my life. My family always comes first, and I was working for Vince (McMahon) and somewhat fulfilling some needs of being an entertainer / athlete. So I can’t put a timeline on it, but once an athlete, always an athlete. Once a competitor, you always want to compete.”

Life in the WWE was good for Lesnar though, and as one of the pro wrestling giant’s top superstars, he didn’t skip a beat in terms of being in the public eye. And whenever he got an opportunity, he hit the gym like the old days.
RELATED CONTENT: UFC 200 - Extended Preview | The best Lesnar quotes | Free Fight: Lesnar vs Mir

“I would hit the focus mitts or get in some grappling over the years, and I never walked out of the gym arena,” he said. “So any chance I had to feel like an athlete and compete in the workout arena, I did. It’s not like I fully stepped away from MMA.”

In early June though, he stepped back in. A teaser image showed up in a UFC 200 promo aired during UFC 199, and a couple days later, Lesnar was doing the media rounds to announce his comeback to MMA and his opponent, “The Super Samoan.” The choice of opponent shocked many, as the power-punching Hunt isn’t the fighter anyone wants to face after nearly five years away, but that’s just business as usual for the 38-year-old Lesnar.

“You can’t pick or choose your opponents in the NCAA wrestling tournament,” the 2000 NCAA Division I champion for the University of Minnesota said. “Sooner or later you’ve got to face them all. So I’ve never run away from any of the opponents (UFC President) Dana White has put in front of me. Not one time. So it could have been anybody, and it’s Mark Hunt. I’ve followed Mark’s career and he’s had a great career. He’s a heavy hitter and it’s the classic heavy hitter against the wrestler (matchup). And that’s what made the UFC from the very first one. The different disciplines against each other.”

That’s the consensus among fight fans and pundits, that if the fight stays standing, Hunt wins. If it goes to the mat, Lesnar – who recently received his blue belt in Brazilian Jiu-Jitsu – will pick up his first win since he submitted Carwin in July of 2010. Nearly six years after that victory, Lesnar isn’t concerned with who says what about him or the fight. His only focus is on Hunt. Not the media, not predictions, not what happens on July 10 or beyond. 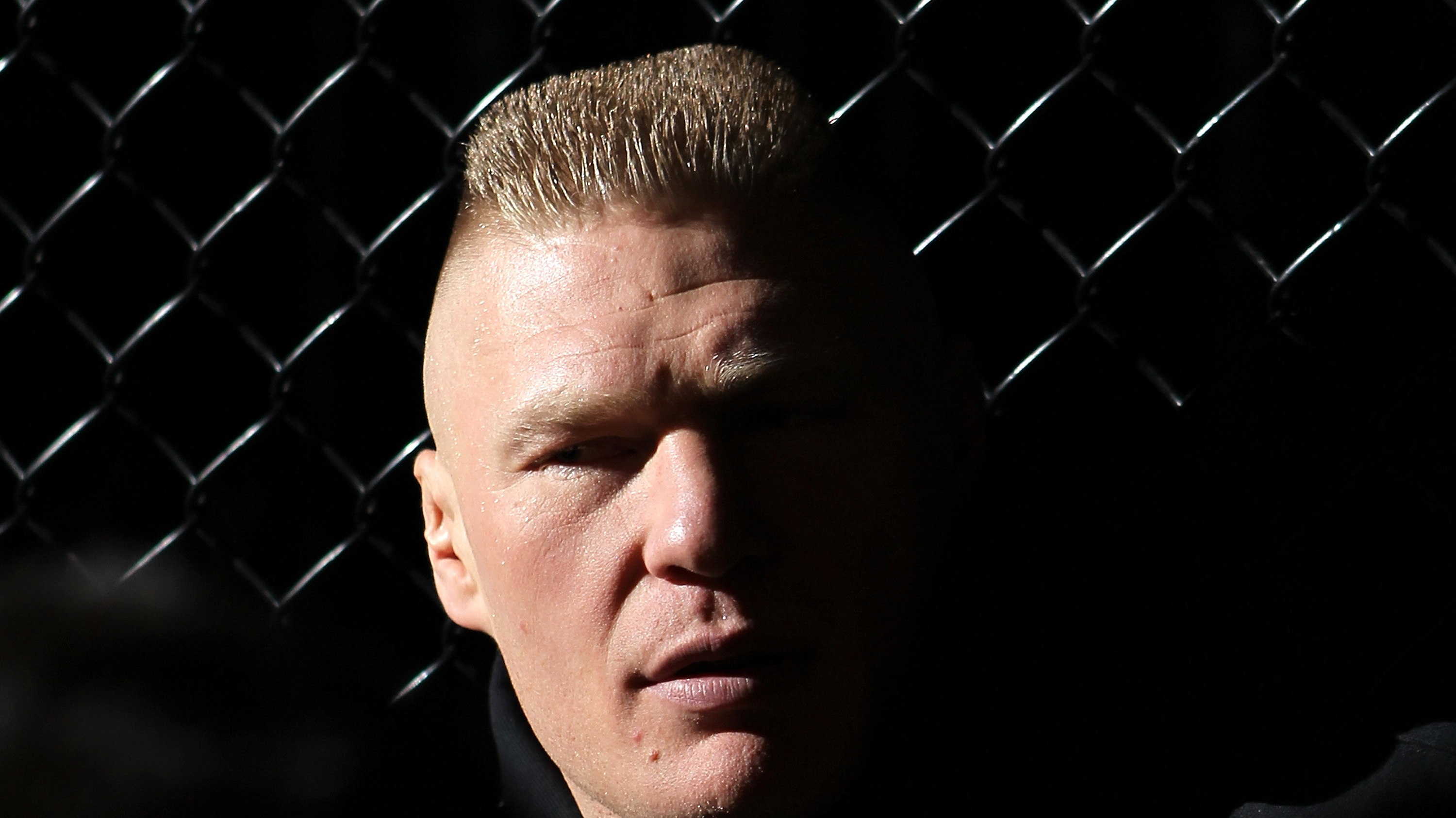 “I’m just thinking about one fight,” he said. “I’m not thinking about anything other than stepping foot in the cage against Mark Hunt. Hell, I forgot my kids’ birthdays. This is how serious I’m taking this. I’ve shut my life out, I’ve shut everything out that’s meaningless, and I don’t have a lot of meaningless s**t in my life. I’ve sacrificed a lot for this training camp to get down to the nitty gritty and make it all about fighting. I’m ready for this fight today, and that’s the bottom line.”

As Lesnar bristles about questions regarding his future, the intensity in his tone is evident and it’s clear that he’s not giving the usual “I’m just focusing on the fight ahead of me” line. He means it. But when reminded of the impact he made in MMA the first time around and how excited the fans are about his return, he softens a bit.

“Let’s see how this goes,” he said. “It’s the fight game and that’s the beauty of this sport, that anything can happen. And it happens fast.”

Lesnar’s first run in the UFC went too fast, but he made a mark few have in just seven fights. Think about it – he fought and nearly beat Frank Mir in his second pro fight, avenged that loss three fights later, and by then he had beaten former PRIDE star Heath Herring and stopped Hall of Famer Randy Couture for the UFC heavyweight title. Add in the epic win over Carwin, and that’s a resume to be proud of. But Lesnar still feels there’s unfinished business. If not for the history books, at least for himself.

“For me, I wanted it to last longer and this is all about having fun for me,” he said. “Life is all about timing. If this wasn’t UFC 200 or if it would have been any other time, who cares, it just so happens that it’s UFC 200, it’s now, and it’s time. My life has always been about timing, the timing feels right, and everything fell into place. Come on, for two organizations and myself to be on the same page, it’s a miracle that this is even happening. It’s just meant to be. July 9th is going to be my night, I believe that. And I’m sure Mark Hunt is sitting there saying that he’s going to try to prevent that from happening. It’s a plain Jane simple storyline.”