Lesnar: Was The Beast The Best?

Check out the Best of The Beast collection on UFC Fight Pass now... 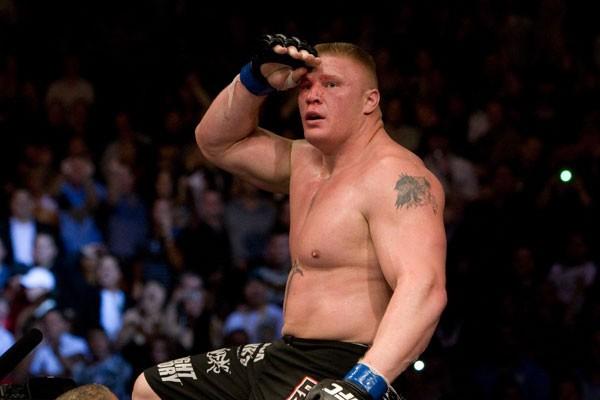 Jim Ross knew it right away: Brock Lesnar was going to be something special. Sure, the native of Webster, South Dakota had already snagged a junior college national wrestling championship and the buzz was going pretty strong about him at the University of Minnesota in his junior year there, but it was more than that for Ross, the beloved pro wrestling broadcaster and then the head of Talent Relations for the WWE, as well as the company’s recruiter, Jerry Brisco.

They saw not only a tremendous athlete, but a potential star.

“I saw Brock in his junior year of college in the NCAA tournament, and Jerry and I both agreed that it had been years since we had seen anyone that big, that quick, that agile, that had that sports entertainment look that you couldn’t really take your eyes off of,” said Ross. > Watch: Jim Ross on Brock Lesnar

Luckily, they had an “in” to get close to Lesnar, as one of Brisco’s college wrestling teammates at Oklahoma State University, J. Robinson, just happened to be the head coach at Minnesota. And while the two pro wrestling veterans didn’t hide their intentions about wanting to make Lesnar an offer to join the WWE, they agreed not to go near him until after the big man’s senior season was complete.

“The dialogue we had with Brock was very casual,” said Ross. “We said ‘focus on your amateur career and your classroom work, and if you win a national championship next year, it will be worth more money to you if you come to WWE.’ That conversation came to fruition and he won a national championship, so we were already in place, knocking on his door to provide a college student a career.”

Lesnar would win the 2000 NCAA title and transition into the world of pro wrestling, where he became a huge star and box office gold, despite not fitting the usual mold of those who compete in sports entertainment. Ross, known as “JR” to his legion of fans, never saw this as an issue.

“The misnomer is that the big personalities can only be enhanced by their verbal skills and even though his verbal skills were not refined at that time, and he’s never been a Chael Sonnen, and never will be, that goes for a lot of people,” he said. “But Lesnar’s look, his athleticism, his physicality, his agility, the amazing things he could do for a 6-3, and at that time, 300-pound guy, were just phenomenal. He had what I would refer to as animal magnetism. And animal magnetism doesn’t have to have anything to do with how versed one is with the spoken word.”

Yet after a few years of spending upwards of 200 to 300 nights on the road per year, Lesnar - always a free spirit – walked away from WWE to pursue what he hoped would be a career in the NFL. This, after never playing a down in college football.

“He left WWE earning seven figures after three years in the business, which was unheard of,” 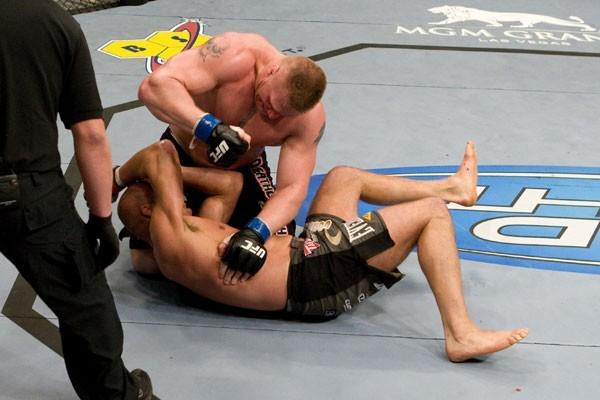 said Ross. “No one in the history of sports entertainment had ever gotten to that level of income that quickly. So then he left us and went to the Minnesota Vikings. He decided he was going to be an NFL player. And ironically, he had a motorcycle accident, went into camp not a hundred percent, and still was the last cut made. So he almost made the Vikings team after not playing football since he was in high school, and that was in a small South Dakota high school. It wasn’t like he played at some major high school football factory.”

If his exploits on the wrestling mat and in a pro wrestling ring weren’t enough, nearly making an NFL roster with no experience was nothing short of remarkable. But then he was about to up the ante considerably when he announced his desire to compete as a professional mixed martial artist. And after winning his first bout in 69 seconds against Min-Soo Kim in Los Angeles, he approached UFC President Dana White about competing in the Octagon.

White was incredulous to say the least, but he did take a liking to Lesnar, and he was soon convinced that he could make some noise in the Octagon. >Watch: Steve Austin on Brock Lesnar

“From the first conversation I had with Brock Lesnar, I was confident that he was gonna fight in the UFC,” said White in 2007.  “He had fought in another show, and after he fought in that show, he realized what it was like to fight in a rinky-dink organization.  Fighters and athletes of that caliber want to come to the UFC because this is the place to be.  It’s the most professional, it’s got the best fighters in the world and if you want to make your name and cement your legacy, the UFC is the only place to do it.”

Ross knew his former charge had the goods athletically and wrestling-wise; all he was worried about was whether Lesnar could get up to speed on the other aspects of MMA in time to battle the best in the world in the UFC.

“Me being a UFC fan and the guy that signed Brock and managed him as the head of talent relations, I was never concerned about his wrestling, his takedown ability or his ability to defend a takedown, and I knew that he had massive hands and great agility and speed,” he said. “My only concern was the same concern I have for anyone who is a lifelong amateur wrestler, and that’s how will their stand-up defense be? Because you don’t work on blocking strikes or countering strikes all these hours and hours in the wrestling room. So that was my concern – would he be picked apart by someone that had great hands and could beat him in the stand-up.” 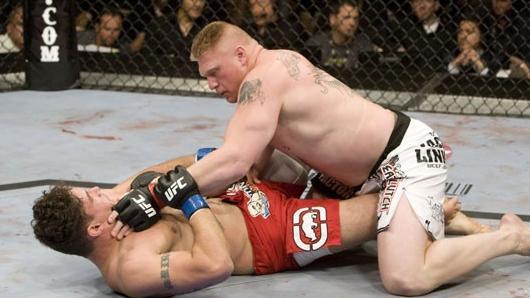 Time would tell on that point, but first he had to deal with a grappling master in former heavyweight champion Frank Mir. Yes, Lesnar’s second pro fight and first in the UFC was against a former champion. And while he lost the UFC 81 bout in February of 2008 via first round submission, many believe if Lesnar received a warning for a foul from referee Steve Mazzagatti instead of a point deduction and restart, he was seconds away from a TKO victory. But regardless of the circumstances, Lesnar was 0-1 in the Octagon and he wasn’t happy about it.

“I saw the look in Lesnar’s eyes, and I had seen it before,” said Ross. “I knew there would be a different day coming. The nice thing about him losing his first match, it ignited a fire. He got very hungry, he was very embarrassed, and he was a little bit humiliated, but there would be another day.”

There would be several. Lesnar bounced back with a win over longtime contender Heath Herring, and then in just his fourth pro fight, he stopped Hall of Famer Randy Couture in the second round to become the UFC heavyweight champion. He got even with Mir in their UFC 100 bout, but then he began to deal with an opponent he had no chance at defeating: diverticulitis. The severe intestinal ailment floored Lesnar twice, and while he was able to return to the Octagon after a year away following the first bout, beating Shane Carwin and losing his belt to Cain Velasquez, the second sent him away for over year. When he returned, he was easily dispatched by Alistair Overeem at UFC 141 in December of 2011, announcing his retirement after the fight and leaving a bunch of what ifs.

“As one that has suffered from diverticulitis and diverticulosis myself, which cost me 13 inches of my large intestine, I don’t think people realize the severity of the ailment,” said Ross, 62. “I certainly would not have either if I hadn’t suffered it myself. So it’s a serious piece of business and it’s just a debilitating matter. But here’s the thing about Lesnar…when we had him in our training facility in Louisville, we sent him and his training partner, Shelton Benjamin, another wrestler from Minnesota, with him. And if you had all the prospects sitting at ringside listening to an instructor give a lecture or some tutoring, and you said, ‘okay, everybody hit the ring,’ he’s the first guy in the ring. He was so competitive in everything that he did. If you saw smaller guys doing aerial pro wrestling maneuvers like dropkicks or anything where they would leave their feet or go to the top rope, things that guys his size don’t need to do or never usually ask to do, he wanted to able to do them better than the smaller guys who had to depend on the “flying style” to develop an identity. The point I’m making is that his competitive nature is overwhelming. He has that burning desire to not be second at anything. I think that if he had stayed healthy and the diverticulitis had not sapped him of strength and stamina and things of that nature, he would have progressed and kept refining his skills and he would have made sure that he had the best coaching and training staff that he could assemble, and he would have kept getting better.” > Watch: Dwayne Johnson on Brock Lesnar

Ross says the only fighter he sees comparable to Lesnar in terms of athleticism and ability is the current boss of the division, Cain Velasquez, who won the title the first time in 2010 by stopping the Minnesotan. So could Lesnar, who subsequently returned to the world of pro wrestling in 2012, have been the greatest ever if not for the health issues that plagued him? 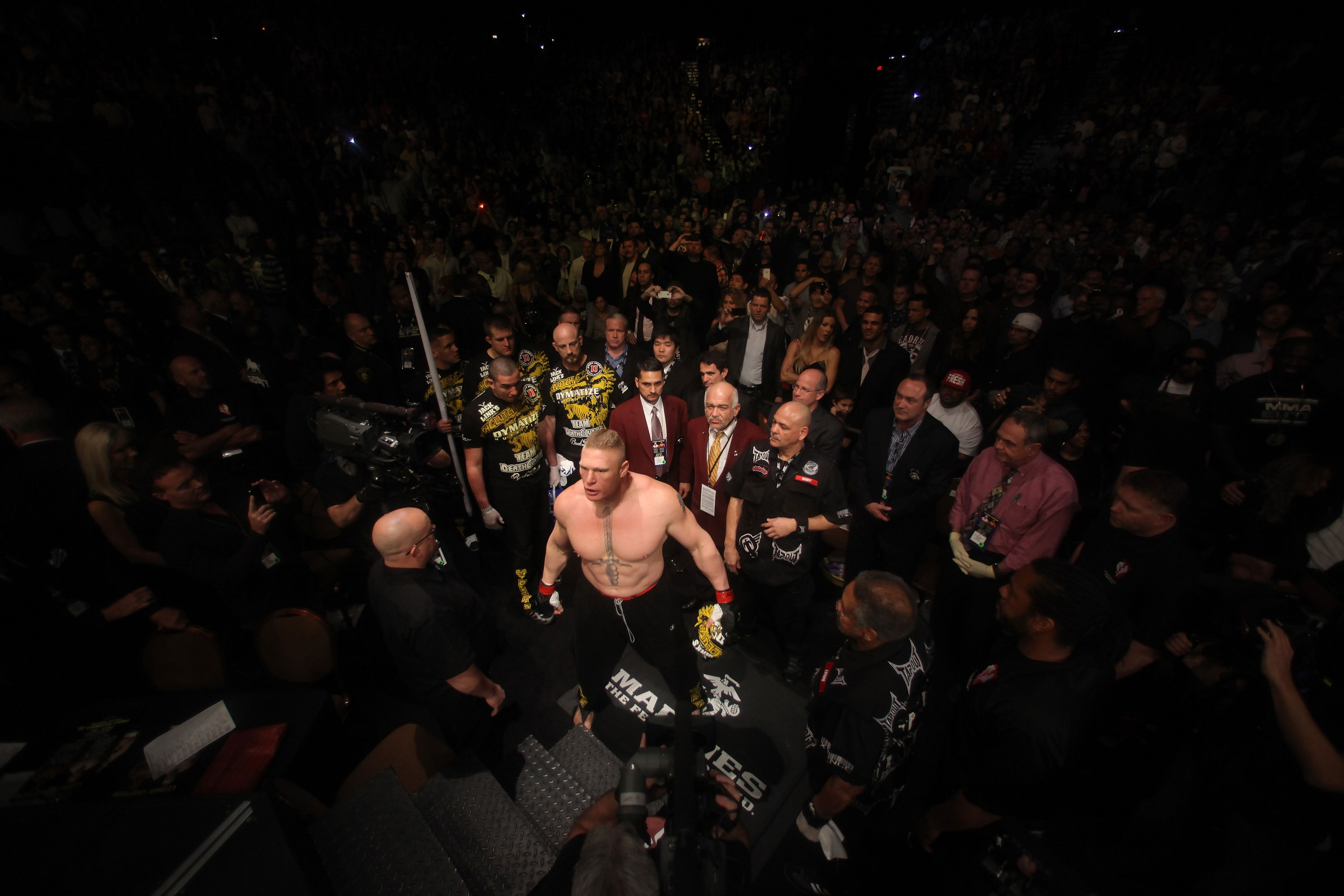 ounce gloves those guys wear are real difference makers,” said Ross. “It makes no one bulletproof. So Lesnar certainly would have never been bulletproof, nor is anyone else in the UFC, because you never know when somebody’s gonna get knocked out. But I do think that Lesnar would have been the most imposing, the most dominant heavyweight maybe that the UFC has ever had. You don’t find guys that are 6-3 with a walking around weight at 280-285, that have his speed, agility and quickness. You just don’t find it. He’s that animal in the wilds that you rarely see – he’s Sasquatch. You heard the legend of him and he was that extraordinary.

“The only thing he couldn’t beat was Mother Nature.”

For an in-depth look at the career of Brock Lesnar, check out the “Best of The Beast” career anthology now airing on UFC Fight Pass. In addition to all seven of Lesnar’s UFC bouts, view archive material, including footage of Lesnar’s amateur wrestling career, as well as exclusive interviews with pro wrestling stars “Stone Cold” Steve Austin, Dwayne “The Rock” Johnson and Jim Ross, each of whom discuss Lesnar’s journey from pro wrestling to the UFC.

For more information on Jim Ross, follow him on Twitter @JRsBBQ and listen to his podcast at http://podcastone.com/The-Ross-Report