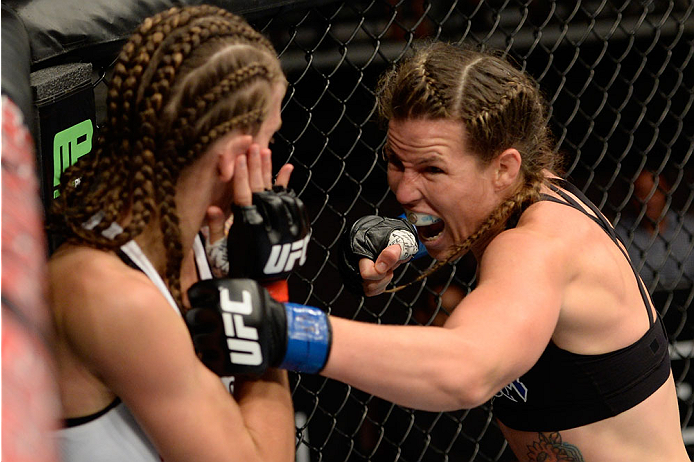 When Leslie Smith says “I’m with the Gracie Fighter team,” that usually explains everything you know about the UFC bantamweight. Home to the Diaz brothers - Nick and Nate, Gilbert Melendez, and Jake Shields, holding GF as your affiliation means that you’re down for a fight. It doesn’t matter against who, when or where, all that matters is that the opponent shows up.

Smith takes it one step further, and it really has nothing to do with her frenetic fighting style. It’s all attitude, and it started in Colorado back in 2008 when she saw a fight team practicing in the gym where she was a personal trainer. After practice, she approached the coach.

The response was yes, and the Santa Ana, California native was in. Of course, that whole hitting people as hard as she could thing was going to have to wait; at least three months she was told. That wasn’t acceptable, and soon, when an opportunity came up for a fight if she could make 130 pounds, she jumped on it.

That was about a month in. She knocked her opponent out and she was off to the races.

The only problem was, Smith wasn’t too picky when it came to her opponents. In fact, she wasn’t picky at all, taking on all comers, including the likes of Kerry Vera, Ediane Gomes, Kaitlin Young (twice), and Raquel Pennington, all within her first eight fights. And her 5-2-1 record reflected it.

She laughs, and while she says that her current manager, Cesar Gracie, is “all about trial by fire,” even he’s had to pull back the reins to make sure she realizes that she has a career to worry about.

“This is my mentality (to fight anyone), and that’s why my management is so important,” Smith said. “Man, I’d be fighting all of them. And if I started thinking ‘well, maybe this isn’t a smart fight, maybe I shouldn’t take this fight,’ that would make me question whether I belonged in fighting altogether. From my perspective, that’s what a fighter does – they want to fight people.”

If the 32-year-old Smith wasn’t on your short list of favorite fighters before, that above statement should clinch it, and that’s even before talking about her fight game, a dose of controlled chaos that led her to Fight of the Night awards in four of her six fights in Invicta FC. And despite a 6-4-1 overall record, there were no sideways glances when she was signed to the UFC roster earlier this year. She would lose her debut to Sarah Kaufman in a rematch of their memorable 2013 war in Invicta, but in July, she blitzed Jessamyn Duke, stopping the TUF 18 veteran in 2:24 of the first round.

“It was one thing to make it to the UFC and have a fight there,” she said. “It’s an entirely other thing to get to win a fight in the UFC. So all the months and all the interactions with people from the time I fought Sarah Kaufman, where everyone was like ‘congratulations on being in the UFC,’ I had to tell them yeah, but I didn’t win yet.”

Now she has that UFC win under her belt, and she’s looking for another one on Saturday against Jessica Eye, for the fight-loving fans of Mexico, this one may very well walk off with Fight of the Night honors.

“My coach Jongsanan was telling me months ago, before I got the fight with Jessamyn Duke, that Jessica Eye would be a great opponent,” Smith said. “It’s going to be an exciting fight, and our styles are similar in the fact that we’re willing to stand up and trade or go wherever the fight’s going to go, but since we’re already standing, I have that much more of a chance to put my rhythm on it. We’re already playing music, so I can be the one who’s gonna change the beat and make sure it’s to my rhythm.”

Once she hit her groove in the Duke fight, she was unstoppable. But what about those close, back-and-forth fights of years past, where if you asked ten people who won, half would say Smith and half would say her opponent, but usually they went the opponent’s way? Did she ever wonder when the MMA Gods were going to shine the light in her direction?

“I have wondered before, but I figured that it’s just something more than I need to fight against, that’s all,” she said. “Judges and refs are only there to do their jobs, and as long as I do my job well, their job doesn’t have any effect on my job. It just makes me think every time, ‘man, I’ve just got to do my job a little bit better.’”

Leslie Smith says a lot of things you don’t hear from fighters these days, and better yet, her actions back those words up. So what separates her from the rest of the pack?

“I think that it has a little bit to do with the mentality just walking into the fight in the first place,” she explains. “At the end of everything, yes, I’ve trained technique and I have a lot of faith in my technique, but I think with a lot of fighters that I’ve watched, you can see when they try something and it doesn’t work, immediately the tide turns the other way. I think that’s a mentality thing and I’m there to fight. I never expected an easy fight from Day One. I don’t place all of my trust in the winning of the fight in any one technique. I figure every single step that I take is getting me a little bit closer to tearing down the fortress of my opponent’s mind.”