Those were my first words to UFC featherweight Lerone Murphy, who takes on Brazilian Douglas Silva de Andrade on Wednesday, after we exchanged pleasantries at the outset of our transatlantic telephone call a couple weeks ago.

It’s the first time I’ve started an interview in such a manner, but I, like a lot of people, needed to let the 29-year-old Brit know that I had made a mistake in not paying close enough attention to him when he first appeared on the scene in the fall of 2019.

“I was sleeping on you like a lot of people,” I continued, “and I just wanted to let you know that I’m paying full attention now.”

Murphy laughed and set my conscience at ease.

“It’s not your fault,” he said. “Not many people were knowing me, and I’ve not had many fights, so I’m kind of a dark horse in the division right now.”

That was indeed the case when “The Miracle” showed up ahead of UFC 242, where he battled the returning Zubaira Tukhugov to a draw, forcing people to dig a little deeper into his backstory and learn about the newcomer from Manchester. 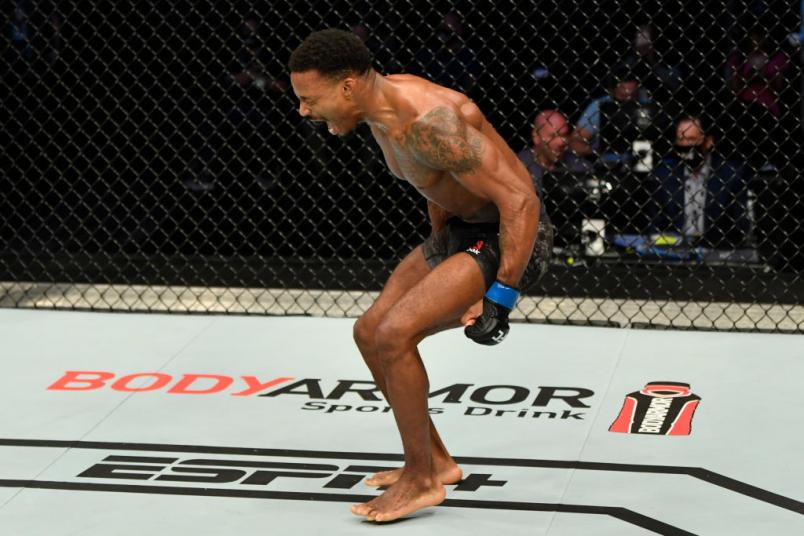 Lerone Murphy of England celebrates after defeating Ricardo Ramos of Brazil in their featherweight fight during the UFC Fight Night event inside Flash Forum on UFC Fight Island on July 16, 2020 in Yas Island, Abu Dhabi. (Photo by Jeff Bottari/Zuffa LLC)

He hadn’t come up through the standard British and European regional promotions most track closely, logging time under the Celtic Gladiators and Full Contact Contender banners instead.

He hadn’t fought a stable of established names or garnered the kind of pre-arrival buzz that has accompanied a host of talents from the United Kingdom and Ireland in recent years, instead reaching the Octagon as a relative unknown and surprising most observers when he went toe-to-toe with the well-regarded Tukhugov for 15 minutes en route to a split draw verdict.

“Obviously, people see all the fresh prospects coming through those type of shows and I ended up taking a different route,” said Murphy, who fully understands how he slipped into the 145-pound ranks undetected and is only now starting to pop up on people’s radar. “I still ended up taking good fights, but it just wasn’t the main shows everybody knows of.”

The bout with Tukhugov served as an introduction and an opportunity to get up to speed on Murphy and his pre-UFC exploits.

Last summer, he returned to Abu Dhabi and made it clear that he was someone folks should most certainly be keeping tabs on in the featherweight division, collecting a first-round stoppage win over Brazilian prospect Ricardo Ramos, securing his first UFC victory and pushing his unbeaten streak to start his career into double digits.

“In that second fight, I was much more relaxed and there wasn’t a crowd there, as well, and that might have played some kind of part in it,” he said, reflecting on the adjustments and improvements he’d made between his debut and sophomore outings inside the Octagon. “In the second fight, I’d already taken in the scenery from the first fight, so nothing was new to me and I just got in there and knew the levels straight away, where the first fight, I was kind of shocked by what kind of power and timing Zubaira was throwing at me.

“I wasn’t used to it and in the second fight, I came out and switched onto it right away. 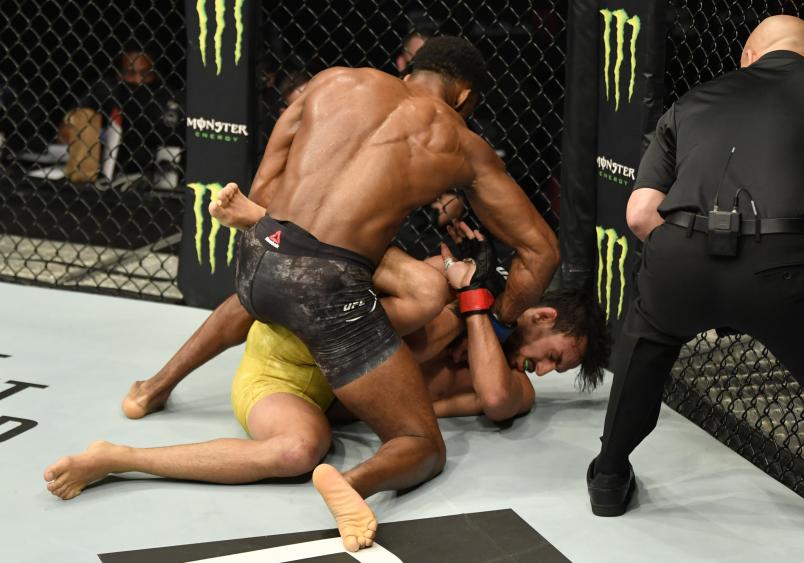 “You have to feel the level to know about it and know what kind of level you need to be training at to compete with these guys because it’s the best organization in the world,” added Murphy, who has worked with current bantamweight champ Petr Yan and former bantamweight titleholder Dominick Cruz in the past. “You’ve got guys from all over the world that are training their asses off to come out there and beat you — you’re literally competing against the best guys in the world — so you have to be in there to experience it.”

Just two fights into his UFC career, Murphy already been able to establish a baseline for where he fits in the talent-rich featherweight division.

While most newcomers are often paired off with fellow debuting fighters or seasoned hands residing in the shallow end of the divisional talent pool, the matchmakers threw the Manchester Top Team representative right into the deep end in pairing him off with Tukhugov and Ramos in his first two appearances.

In turn, Murphy showed he’s a very capable swimmer, and this week, he continues swimming in the deep waters as he squares off with the Brazilian veteran Silva de Andrade.

“I feel like it’s a blessing that I’ve been getting these types of fights; it’s a blessing that puts me right up there straight away,” he said of landing tough assignments right out of the chute. “Everybody I’ve fought has had double or triple the amount of experience than me, which is definitely good for me. If I can keep beating these guys, I’m going to climb the rankings faster than usual.

“Looking at the division as a whole, everybody is very, very good,” continued Murphy. “The level in the UFC is crazy at the minute, so you can fight somebody that has just come off Dana White’s Contender Series and it’ll be a hard fight. The level is very high, so for me to fight an experienced guy that has a name, it’s a plus to me.

“I like to test myself, so I feel like I’ve got nothing to lose with where I’ve come from, and I don’t mind gambling.”

Where he comes from is a life where at 21, he was several city blocks down a dangerous path, one that resulted in Murphy being shot twice in broad daylight on Lloyd Street South in the Manchester suburb of Fallowfield.

He bares the scars of his past on his neck and his chin and uses that brush with death and the reality of what could have been to fuel him to take chances and chase his goals without hesitation, knowing that a loss in the Octagon is nothing in comparison to what he could have lost nearly a decade ago.

“I’ve been taking risks my whole life, so it’s just one of them things,” he explained. “I’m undefeated — it doesn’t matter if I lose because I know that with my ability and my work-rate, I’ll bounce back from that and it could make me a better fighter anyway.

“I’m not scared of losing at all,” he added. “My goal is to climb the ladder to make a better life for my family, so if losing is part of that, I don’t care. That’s why I take the risks: I know I’m on the right path here and I’m going to try my best to succeed and I will succeed.”

How To Watch UFC 257: Dustin Poirier vs Conor McGregor 2

As he readies to make his first start of 2021, Murphy has a clear advantage over many of his contemporaries set to compete on Fight Island as part of the UFC’s three-event kickoff to the year.

Wednesday’s bout with Silva de Andrade will be his third straight fight in Abu Dhabi, and while he doesn’t think his Brazilian foe will be fazed by competing on Fight Island, he does acknowledge that being familiar with his surroundings contributes to his ability to remain mellow and in the moment as soon as he steps into the Octagon.

“I feel like it definitely works to my advantage, but it’s not going to affect Douglas at all because he’s a seasoned vet; he’s had 30 fights already,” Murphy said of making a third consecutive appearance in Abu Dhabi. “But for me, I know what to expect, I know what the arena is like and nothing is new to me. When I get in that cage, I can be myself and everything is going to come naturally to me.” 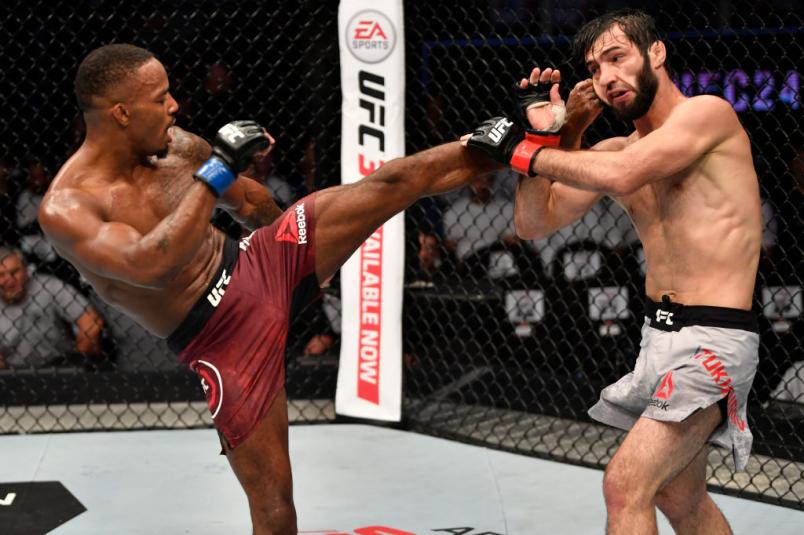 That’s how things looked in his sophomore outing against Ramos — natural and instinctive; like the attacks and counters he needed to deploy in order to escape potentially dangerous spots and eventually collect the first-round finish were sequences he could access without thinking.

“I felt like I was on autopilot out there,” he said of his performance against Ramos, which featured a number of quality scrambles and ended with Murphy unloading heavy ground-and-pound on the Brazilian late in the first round to secure the stoppage. “When you’re well-drilled in certain things, it just comes out.

“But that’s just my personality, too,” he added. “I’m just a chill guy. I take everything in life chill; I’m a relaxed person.

“In the fight, my mind was clear, I could hear my corner, every little situation that happened was just autopilot. That’s just the person that I am.”

After being a slept-on member of the featherweight class through his first two starts, Murphy has designs on being one of breakthrough fighters of the year in 2021 and is excited to get an early start on things, as it allows him to potential emulate a trio of fighters who captured the audience’s attention by competing frequently in 2020.

“You’ve got to look at the game at the moment: who are the biggest fighters?” he asked. “It’s the guys that are fighting four, five times a year — Khamzat (Chimaev), Kevin Holland, Angela Hill; these are the people the fans get to know because they’re fighting a lot.

“I’m happy to be able to fight in that times we’re going through — the UFC have done a crazy job putting on all these fights, keeping fighters putting food on the table — and to get a fight in January is a great start,” he added. “I want to get the year off to a good start, get a win, and hopefully I can get another three in.

“In a perfect world, I can get two, three, four more fights.”

“I would give you a name, but I feel like if you give names before the fight at hand, it’s a bit disrespectful,” said Murphy, showing veteran savvy and class. “If I get this win on January 20, I’ll definitely have a few names that I like.”

This time, people will be paying close attention, me included, because the days of sleeping on Lerone Murphy are over.