“Sometimes you need the loss to learn.”

Leonardo Santos is describing his last-second defeat to rising prospect Grant Dawson in March. It was a fight that even commentator Michael Bisping described as one Dawson was “about to lose” before some well-timed hammer-fists just ahead of the final bell snatched the victory from the jaws of defeat. That’s MMA for you. But even with time to reflect, Santos insists he wouldn’t have done anything differently.

“It’s the hard way to learn, but sometimes a loss is the way you learn fast. I don’t like a loss…I hate it! But sometimes…s*** happens,” he laughs.

It was Santos’ first loss in nine UFC fights. After winning the welterweight tournament on The Ultimate Fighter: Brazil 2 in 2013 (and defeating current UFC star Thiago Santos along the way), he returned to his natural weight class at 155 pounds, where he has remained for the duration of his time in the promotion. Injuries and cancelled fights kept him out the Octagon for nearly three years in the middle of that run, but when healthy he boasts thrilling victories over the likes of Stevie Ray, Kevin Lee and Rocco Martin, among others.

Now he’ll stand across from fellow veteran Clay Guida on the main card of UFC Fight Night: Font vs Aldo this Saturday. Guida, like Santos, is one of the last remaining OGs of a fast-disappearing UFC era, and the Brazilian seems as excited by the matchup as us longtime fans are.

“Clay Guida is a legend of the UFC, in the Hall of Fame. For me, it’s the first time fighting a guy like him…it would be an honor to share the Octagon with him.”

Even with over 50 pro fights worth of film available, Guida isn’t the easiest opponent to prepare for, as Santos will tell you. 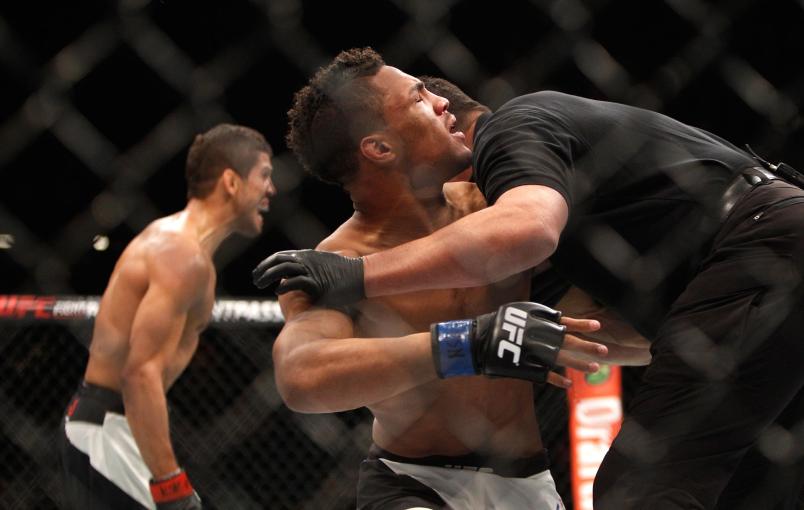 The referee stops a lightweight fight between Leonardo Santos (L) and Kevin Lee during UFC 194 on December 12, 2015 in Las Vegas, Nevada. (Photo by Steve Marcus/Getty Images)

“It’s hard finding the friends to want to help me to be like Clay Guida. I sent them videos and they said, ‘You need to do [something] similar,’” he laughs, noting that it’s near-impossible.

“He fights a little wild. It’s hard to expect something normal,” he laughs, perhaps summing up Clay Guida as succinctly as anyone ever has. “We have a good team--a big team--at Nova União in Brazil. They help me a lot. We have a lot of good guys: wrestlers, tough guys, strong guys. So I’m ready.”

It should make for legitimate old-school fireworks that will set the stage for his friend and teammate José Aldo, who appears in the main event two fights later.

“He’s an amazing fighter. He has something different from other guys. It’s very special for us to watch his training, watch him compete.” 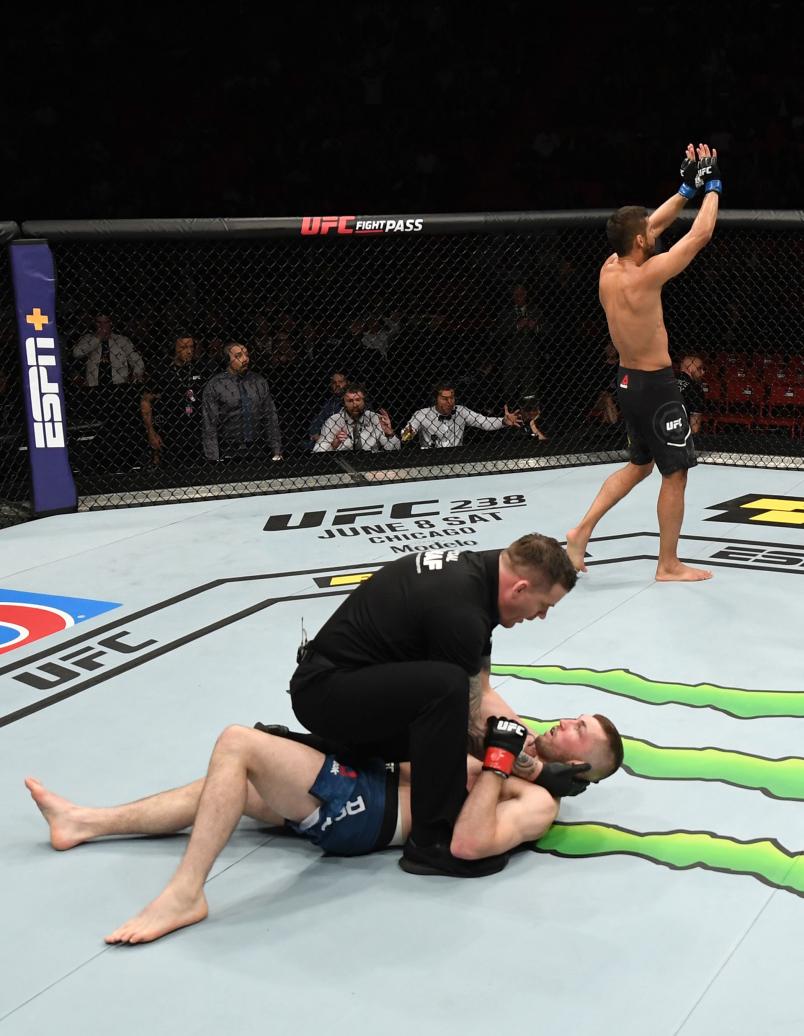 Leonardo Santos of Brazil celebrates his KO victory over Stevie Ray of Scotland in their lightweight bout during the UFC Fight Night event at Ericsson Globe on June 1, 2019 in Stockholm, Sweden. (Photo by Jeff Bottari/Zuffa LLC)

It’s interesting to hear Santos—several years Aldo’s senior—describe him with the same awe and wonder as the rest of us.

“José Aldo is my old, longtime friend. I saw him one of the first times he stepped into Nova União in Rio. I helped him a lot, he helped me a lot. To be with him on the same card is an honor. Cutting weight is hard for us, but we do it together and together we’re going to win.”

One of the true jiu-jitsu greats at 155 pounds, Santos has trained in the discipline for 36 of his 41 years on the planet. A fourth-degree black belt, the submission ace entered the UFC with 15 pro fights on his resume as a feared competitor from the likes of  Shooto Brazil and Sengoku dating back to 2002.

“Some people tell me I’m crazy. They say ‘Hello? Why you stay so long taking punches and kicks to the face?’ But what I tell the people is ‘That makes me happy.” That’s it. When I wake up, I don’t see myself in the office working with something different. All the time I love it when I step in the ring, when I step into the academy for training, for camp. That makes me happy. It’s hard to stop.