"I thought about all that hard work and the days I spent recovering from
my injury and left my family for training. When I won, it
was worth it." - Leonardo Santos 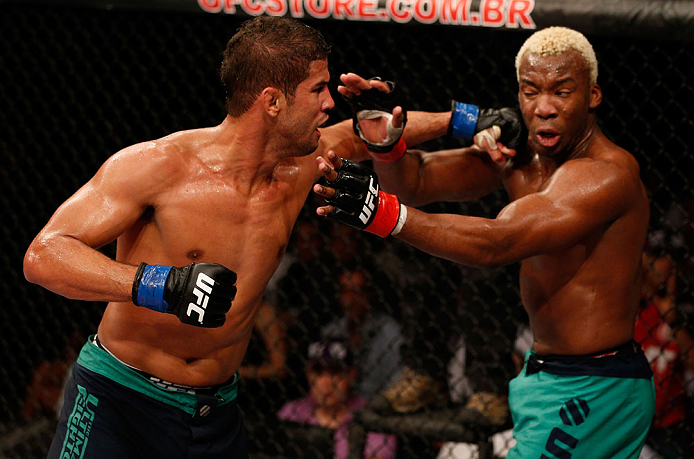 In one way or another, everyone in the UFC is a tough guy. But when you fight a 10-0 Takanori Gomi in your first pro MMA fight like Leonardo Santos did in 2002, that takes things to a whole new level.

Yet like most legitimate tough guys, Santos sees no need to brag about such a feat when he recalls his debut, only saying, “It was great. Takanori is an amazing fighter and I learned a lot from that fight.”

At the time, Santos was already one of the world’s top jiu-jitsu practitioners and a member of the Nova Uniao team, but the unbeaten Gomi was a Shooto champion on his way to becoming PRIDE’s only lightweight titleholder. It should have been a blowout, but Santos went the distance with “The Fireball Kid” before losing a majority decision.

Despite the result, it was a promising start to an MMA career that Santos wouldn’t resume until 2006, but despite two five fight winning streaks, he never got the call to the UFC. He remained committed to the sport though, even as he passed his 30th birthday.

“I helped my training partners and kept pursuing my dreams,” he said when asked how he kept motivated during these years. “Even when I was injured, I never considered quitting. I knew what I wanted.”

Eventually, the Rio de Janeiro native got what he wanted, but it didn’t come in a conventional fashion. In 2013, he had the opportunity to earn a spot on the Ultimate Fighter Brazil 2 cast, and after stopping Luciano Contini in the first round, he got it.

On the show, Santos impressed, beating Juliano Wandalen and Thiago Santos (no relation) to make it to the semifinals. In that bout, he was eliminated by Santiago Ponzinibbio in the award-winning Fight of the Season, but when Ponzinibbio was pulled from the final due to a broken hand it was Santos who got the call to replace him against William Macario.

And even though the young gun Macario was favored by many, it was Santos whose experience won out, as he submitted his countryman in the second round. The emotional veteran was a UFC fighter.

“I thought about all that hard work and the days I spent recovering from my injury and left my family for training,” he said. “When I won, it was worth it.”

So yeah, you guessed it, he would do The Ultimate Fighter again?

“It was a different experience than I ever had,” he said of his time on TUF. “Winning the show was the best part, even though I was missing my family. It gave my career a new start.”

The next chapter begins Sunday, when he faces a fellow TUF winner in Norman Parke, a fighter on a nine fight winning streak that includes three UFC victories.

“I need to be careful with his takedowns and ground and pound,” said Santos, who will have plenty of training partners to get him ready at the Nova Uniao gym.

“The atmosphere is great here, and it got even better after Renan (Barao) and (Jose) Aldo kept their belts,” said Santos, who hopes to one day add another championship belt to the team’s trophy case.
Better late than never.