"I was in there (the gym) every day, just learning stuff all over again and trying
to become a more exciting, dynamic fighter instead of just a wild, crazy
guy." - Leonard Garcia 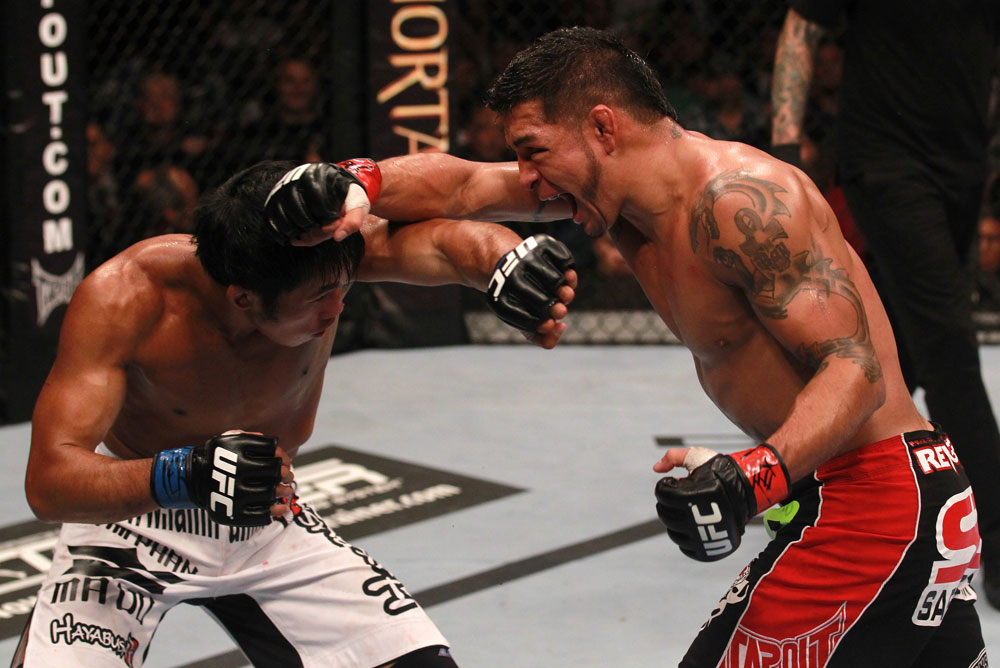 Leonard Garcia has never been one to mince words. So after two consecutive losses against Chan Sung Jung and Nam Phan, the first such streak in his 13 year career, he’s reached the point where he’s looking to switch things up for this Friday’s bout against Matt Grice. Yes, the “Bad Boy” may just be putting his wild swinging, all out aggressive standup assault to the side. But don’t worry, he hasn’t forgotten about being a crowd pleaser.

“You know what, submissions are exciting sometimes, when you can make them exciting,” said Garcia. “Going for flying armbars and flying triangles and stuff like that, it’s something people don’t expect from me, and I’ve been known to pull them off. So I think I can keep the exciting style, but just start showing different aspects of it.”

Yes, that’s Leonard Garcia. There is no halfway with the 32-year old from Lubbock, Texas, only a desire to fight, entertain, and entertain some more. But with his recent skid, Garcia does realize that putting on memorable fights only goes so far after a while.

“You don’t want to be somewhere where you’re not winning all the time,” said Garcia, 2-4 over two stints in the UFC. “Competitiveness is something that’s driven me the whole time and the Fight of the Night bonuses, even sometimes when I did lose, did make it easier to swallow a loss, and there’s nothing out there that should make it easy to swallow a loss.”

It’s an honest answer from an honest fighter, and it wasn’t always that way for him. 19-8-1 over the course of a career that included a memorable 4-3-1 stint in the WEC that saw him challenge Mike Brown for the featherweight title while collecting three post-fight bonuses, Garcia only had one loss from early in his career when he made his UFC debut against Roger Huerta in 2007. The resulting three round battle saw Garcia lose for a second time as a pro, but the fight was so good he picked up a bonus check and saw his back immortalized on the cover of Sports Illustrated. It also changed him a bit.

“That (losing) was something that was like a knife in my back, piercing my heart,” he said. “It felt like it went that far through and was able to get me to that point. I remember I used to cry for two or three days after a loss. Only when I was by myself and nobody knew, but that’s how bad it used to hurt to lose. And after the Fight of the Night bonuses, when I fought Roger Huerta, I remember I felt it that night and then I got so much praise for the fight and got the bonus for it, and it took some of the sting out, which is something that I think blurred my vision when it came to losing.”

The way he saw it, as long as he fought his heart out trying to win, if he fell short, it was going to be all right because he gave his all and put on a show that the fans wouldn’t forget. But after the losses to Jung and Phan, he decided that he had enough.

“Right now, it’s been two fights in a row,” said Garcia. “The Korean Zombie (Jung) came out with a really tricky move and he was able to catch me. The Nam Phan fight was a really tough fight; Nam’s got a tough style for me and I understand that. And both times that I fought Nam they’ve been short notice fights. But I just feel like it’s time for me to be able to tell guys, if you want to take me down, the consequences of you taking me down are that you’re going to be submitted or you’re gonna get beat up from me off my back. It’s time to start showing people that I do it in the gym pretty well, and I threaten submissions all the time. People that come watch us train are like ‘wow, I had no idea Leonard’s ground game was the way it is.’ It’s something that eludes me whenever I fight because I’m thinking stand up to your feet and put on a show. And every time that I do that, it just seems like either the guy’s gonna hold me down because I’m not threatening anything other than standing up, and it’s time to change that. I’m too much of a competitive person to have two losses in a row. And that’s something that has really, really bothered me and that has kept me in the gym this whole training camp. I was in there every day, just learning stuff all over again and trying to become a more exciting, dynamic fighter instead of just a wild, crazy guy.”

Add in a little longer break than usual for Garcia thanks to an injury that kept him from competing on February’s UFC 144 card in Japan, and he’s feeling refreshed and ready to go for the Grice bout. Then again, you may want to understand that he’s as happy with the break as you can expect someone who wants to fight all the time to be.

“The time off did me a lot of good,” he said. “Of course, if you ask me, I wish I was busier (Laughs), I wish I could fight more than three times a year every year. But having a little bit of time off, I’m definitely feeling good. Of course you have small things wrong, but this is the first time that I’ve gone in healthy. I feel really, really good about this one, and I’m excited to show everybody the new Leonard Garcia, and I’m ready to go out there and let it go – it’s time already.”

It is, but in the interest of full disclosure, Garcia has promised to tighten up his punches and be more controlled in the past. Isn’t he going to get popped in the grill and go back to being Berserker Leonard all over again? Not if Greg Jackson, Mike Valle, and the rest of the standouts at Jackson’s MMA have anything to say about it.

“What’s real cool is that we’ve been working different drills when I do go crazy,” he deadpans. “I still do it, and you’ve got to have the right guy with the right mentality. A lot of the lighter weight guys that train with me are a little bit heavier and they fight at ’55. The guys who fight at ’45 tend to stay away, only because I can take a really good shot with big gloves on and I can give a really good shot with big gloves on. So I tend to go with the guys who are more Cowboy (Cerrone)’s size, the ‘55ers who cut from like ’80 and ’90. I’ll get in there and start going crazy, and coach is like ‘tighten everything up.’ We’ve been working so many different things on the pads, so many hand drills, and so many footwork drills to change up that craziness, and it’s been working. I’ve been landing a lot more, I’ve been hurting people every round, so my accuracy is getting better, and coach Jackson uses a phrase, he says ‘speed is fine, but accuracy is final.’ I think he got it from Wyatt Earp, and that’s something he drills into my head every day.”

So with all this talk of being more disciplined and showing off his ground game, will we still see Garcia break out in a smile in the middle of a firefight, subconsciously showing the world that he wouldn’t be any other place but in the Octagon? Or more succinctly, will he still be having fun in there?

“Even more fun now,” laughs Garcia. “Getting hit, for me, sparks a fire. It ignites me and makes me feel that I’m in a fight and that it’s time to do something. But the even better feeling that I’m getting now is being in a fight but doing all the damage and not taking very much. So it’s still a lot of fun, and being able to make people miss and make them pay is something that’s exciting for me now, and I’m looking forward to it. But if the guy hits me with something, am I gonna drop my hands and let him hit me again? Probably.”