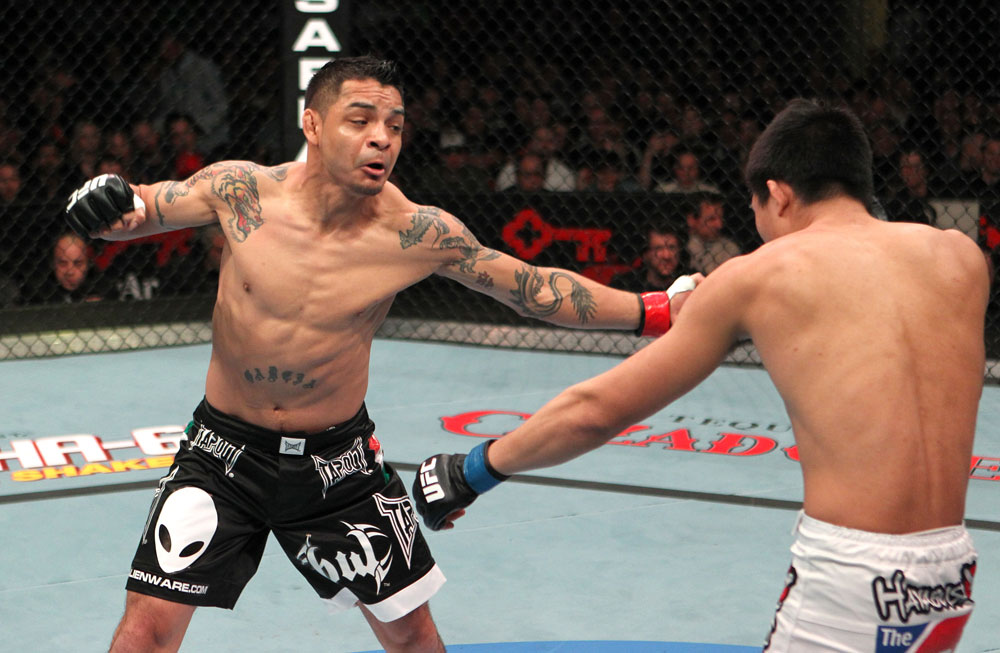 Leonard Garcia was down in the dumps. Forced out of an August fight with Alex Caceres due to injury, the “Bad Boy” from Texas now had to wait to erase the memory of his March loss to Chan Sung Jung while the rest of the mixed martial arts world kept turning.

So he turned to a higher source for help.

“I used to dip tobacco and I made a promise to God and I told him I’d quit dipping tobacco as long as things went the way they were supposed to go,” he smiles. “And lo and behold, I get put on the main card in Houston, Texas against a guy I’ve been wanting to fight. So everything’s just falling into place.”

Maybe it wasn’t divine intervention; maybe it was. But whatever it is, Garcia is convinced that he has to stay away from dipping tobacco because this Saturday night, he will get the rematch he wanted with heated rival Nam Phan and he will do it in the same Toyota Center Octagon where he made his UFC debut back in 2007 against Roger Huerta.

It was that fight against “El Matador” that put him on the map (and put his back on the cover of Sports Illustrated) as a must-see MMA action hero, unwilling to take a backward step in pursuit of victory. The Plainview, Texas native didn’t get the victory that night, losing a three round decision, but he earned respect and a fan following that hasn’t left him since.

“I remember the first round coming out and hearing a lot of cheers for Roger, but it was still a homecoming for me, and people from Texas knew who I was, so I had a good crowd of people,” recalled Garcia of that UFC 69 bout. “I started the second round and picked my hands up in the air and said something to Roger in the middle of the ring, and we started fighting and then I started hearing people saying my name more, and at the end of the fight I just remember hearing the roar of the crowd. It was just a really good feeling. It was a great fight, it was my debut, and it was my coming out party as I like to put it.”

He pauses, almost as if to soak in the cheers once again.

“I made a good showing,” he continues. “Now, I want to go back and the people who were there last time that are gonna be there again this time, I want to show them how far I’ve come and how many steps I’ve taken since then. I don’t know how to put on a better fight than that, but the only thing I know is to fight my fighting style and hopefully it pleases the crowd.”

It almost takes you back to hear him say that he doesn’t know how to put on a better fight than that, because as good as the brawl with Huerta was, Garcia has had more than his share of classics since then, most notably his WEC war for the ages in his first fight with Jung (who is more commonly known as “The Korean Zombie”) and his 2010 scrap in the UFC with Phan.

And while he and Jung have had a good relationship outside the cage before and after their two bouts, Garcia doesn’t exactly see eye to eye with The Ultimate Fighter 12’s Phan, who he narrowly decisioned in one of the most controversial bouts of last year. To his credit, Garcia has not shied away from a rematch, feeling that while he won the first bout, the second one will be even more decisive. And yeah, these two don’t like each other.

“There’s always that mutual respect,” explains Garcia, a veteran of more than 11 years in the pro game. “It takes a certain type of guy to get into the cage and to reach the pinnacle of the sport and compete in the UFC; you’ve got to be a really skilled opponent. So I always walk in there with lots of respect for the other guy. I believe that’s what makes the sport what it is. You can go in there and kill each other and know that when the final bell rings, and you’ve got to show respect. But this one is a little different. I do have ill feelings towards the guy (Phan). He said some things about me that I didn’t like, and I probably said some things about him that he doesn’t like. Will there be a handshake at the end of the fight? Yeah, probably. A hug? Probably not, but maybe. (Laughs) I’m going in there and I want to prove a point to him; he wants to go in there and prove a point to me. This is what’s gonna make this fight so great – we’re both going in with the chip on our shoulder, we both have something to prove, and I had five weeks to get ready for that and I feel like it was the perfect amount of time. I’m ready to go and the fans in Houston are gonna be in for a great fight.”

They always are with Garcia, a name synonymous with crowd-pleasing, swing for the fences, defense be damned scraps. And that’s just with the guys Garcia likes (don’t even ask about the sparring sessions between Garcia and his best friend, lightweight contender Donald “Cowboy” Cerrone). So what happens when he’s in there with someone he doesn’t care for? Do emotions make him play it safe or get even wilder with his haymakers? Is it all out war or business as usual?

“It’s definitely business as usual,” said Garcia. “The only thing is, the killer instinct is a lot easier to reach right away. If I smell any kind of blood, I’m gonna go for it. With other guys, if you have mutual respect, sometimes you smell the blood in the water and you don’t go for the kill right away. You ease off. This is definitely a fight that that’s not gonna happen in. If I hurt him, he’s going down.”

But here’s the thing: for all of Garcia’s bad intentions, he is trying – and trying hard – to bring refinement to his game. If he has his way, he won’t be swinging for the fences all night; he’’ place his punches, throw some jabs in there, and even take care of business efficiently on the mat. If he fights the way he wants to and the way he’s capable of, there may be a new “Bad Boy” in town.

“Everybody likes to see a guy like Mike Tyson come in and knock 20 or 30 people out in the first round, but at the end of the day, people want to see the Erik Morales-(Marco Antonio) Barrera fights, Garcia-Jung, and fights like that so they have something to talk about and something to remember. I feel like I’ve delivered plenty of those; now it’s time to start delivering the knockouts.”

You get a feeling that he’ll be just as exciting pulling those off, most likely in Cheick Kongo come from behind to win fashion. But with things going so well for him now and a huge Pay-Per-View fight coming up in front of his home state fans, has he kept his end of the tobacco bargain?

He is, but when asked to compare staying off chewing tobacco to making the 145 pound featherweight limit, he’s torn…but only for a moment.

“Both of them are really, really hard, but the tobacco thing was murder,” he said. “I had been dipping since I was 13 years old, and it was my one and only habit that I’ve ever had. It’s not that bad, it’s only one habit, and my teeth are appreciating it (stopping) though.”

“Growing up out in the country, you’re always looking for something to take up time, and that’s all I had ever seen,” said Garcia. “My grandfather and my dad were both big tobacco chewers, and as a kid you would run across a plug or an extra bit of tobacco laying around there, and the first few times you ran into it, yeah, it would make your stomach hurt and you got sick and a little bit dizzy (Laughs), but every country kid that I knew out there did it. Nobody smoked cigarettes. Cigarettes were a bad thing to do, it was frowned upon. But for some reason sticking the tobacco in your mouth was fine. (Laughs) The first few years I could get away with it in front of my dad; he didn’t think there was anything wrong with it. But man, if my mom would see it, we’d either swallow it down or get a good whippin’ for it.”

Leonard Garcia has come a long way since then. He’s quit chewing tobacco, he’s fighting on one of the biggest shows of the year, and he’s got a devoted group of fans who will watch him and cheer his on whenever he fights. He’s apparently not a bad dealmaker either.

“I’m telling people, you make promises to God and you hold ‘em, I think he holds up his end of the bargain as well.”