"You question yourself and wonder if you’re ready for a 15 minute war. I’ve answered that question several times and physically I know that I am." - Leonard Garcia 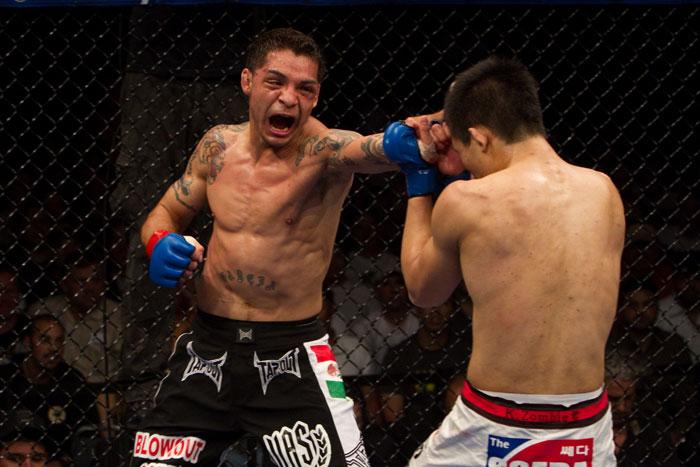 Fear. If you’ve ever seen featherweight Leonard Garcia fight, you would assume that it’s a word that doesn’t reside in his personal dictionary. But the man is human, and there is something that makes his hair stand up on end, yet it’s not necessarily what you think.

“I never want somebody to walk away from the UFC where I fought on the card saying ‘man, that fight was boring. I’d never watch that guy fight again.’ That’s one of my biggest fears and I hope to never have that.”

The unique thing about this is that he means it. Unlike some who claim that the only reason for their fighting existence is to put on a war for the ages, Garcia lives and breathes that reality. Mention his bouts with Roger Huerta, George Roop, Mark Hominick, and the man he faces a second time this Saturday, Chan Sung Jung, to any fight fan, and there will likely be an appreciative nod of the head, with no words necessary.

So when boos rained down on Garcia after his December win over Nam Phan, it was the most personal of attacks on someone who had just given every last ounce of fight he had in the three rounder. Of course, the verdict rendered in the bout was perhaps the most controversial of 2010, with many observers believing Phan had earned the nod, but Garcia wasn’t the one who filled out the scorecards. All he did was fight.

Not surprisingly, given his affable personality, Garcia didn’t take the boos personally, especially since he knows that he did whatever he could to win that night in Las Vegas.

“It’s hard to please one person, let alone thousands of people,” he said. “You kinda want to take it personally, but if you took everything personally in life that everybody tried to put you down for, then you would be living a dead end life. You can’t please everybody, so you gotta be happy with what you’ve done. At the end of the day I looked at it, and I went out there and was able to do a fight completely out of shape and I finished the fight, and no matter what anybody thinks, I feel like I won the fight.”

The victory, his 19th overall and first in the UFC since he submitted Allen Berube in 2007, came at the end of a hectic year that saw him hit a number of highs and lows while fitting in four fights. The lowest point? Probably the lead-up to his December bout, as a scheduled fight with training partner Tyler Toner went kaput, only to see him still on the card against a mystery opponent from season 12 of The Ultimate Fighter that would only get confirmed days before the bout.

“I knew it was one of the four semifinalists,” said Garcia, aware that he was going to face one of four fighters – Phan, Jonathan Brookins, Kyle Watson, or Michael Johnson. “Brookins and Phan had made 145 before. The other guys had never made 145. So it had to be one of those two guys, but their styles are so different. Jonathan Brookins’ style and Nam Phan’s style are like A and Z. So if I prepared for one I’d completely miss the other one.”

That was the least of his worries, especially considering that gameplanning guru Greg Jackson steers his fistic ship. Garcia’s real problem was that when he received word of his new fight, he was enjoying Thanksgiving with his family back home in Texas.

“I had already eaten Thanksgiving dinner, so there was no turning back,” he said. “No gyms were open, so I went to the nearest motel in Texas and asked them if I could borrow their treadmill. I put a sweat suit on and I just started running. It wasn’t a good feeling.”

“I came home and basically continued that trend and I just ran until the weight came off,” he said. “I didn’t get to do very much rolling, not too much kickboxing because it was so close to the fight.”

Yet Garcia, as is his trademark, showed up on fight night ready to throw hands. After round one though, as Jackson gave him instructions, Garcia had some questions to ask himself.

“In a fight, you question yourself,” he said. “Did you do enough? Are you confident that you’re ready for a fight?” This time my questions were why did you do this to yourself? What were you thinking?”

He laughs now, and he can, knowing that the fight is over and that he took a valuable lesson from it. And while he had his highlights in 2010, he’s kind of glad a new year is here.

“2010 was an up and down year for me, and it was really rocky,” he said. “A lot of times I believed what people would say to me. I’d go to the gym, hit a guy really hard, he’d fall down, and they’d go ‘man, you hit harder than anybody else in your weight class.’ And I would walk out of the gym believing that and I wouldn’t train as hard the night after. I learned from all that and I know that training is what’s going to make me the fighter I know I can be in 2011. This year, I want to have nothing but big fights and I want to show people that the Leonard Garcia that dropped down to 145 that was going to become a champion is here now.”

His first start of the year, this weekend in Seattle, was supposed to be a rematch against Phan, a fight both featherweights wanted more than anything. But when Phan went down with an injury in training camp, the call went out for an opponent, and answering was “The Korean Zombie”. If you haven’t seen their first fight from April of last year, stop reading and go find it and watch it now. It was that good. But after 15 minutes of a taxing war color commentator Joe Rogan described as “The Fight of the Decade”, you have to wonder why Garcia and Jung would possible want to do it again. Yet both quickly agreed to the bout.

“My first reaction was ‘wow,’” said Garcia. “I had a good camp and I had a lot of ill feelings towards the guy I was training for (Phan), so I trained really hard and I’m a hundred percent, and then they switched the opponent and it’s this guy who I had this fight with. You look back on this fight, and me and Jung are bonded by blood and sweat. We have a type of connection you can only get through a fight like that. When you go through a war like that, you always wonder, man, if we did it again, how would it be? Now, I don’t have to ask myself that question; I get to find out. It’s exciting and scary at the same time. You’re happy that it’s happening, but you’re so afraid of how it’s gonna play out.”

Some people run away from their fears. Not Garcia. He either finds a way to make sure what he fears never becomes a reality (the boos), or he runs to confront it (another fight with Jung). That’s an admirable trait any way you slice it.

“The fear going into a fight like that is I know he can take it and he’s not going anywhere,” said the 31 year old Plainview native. “He’s gonna be right there. So you question yourself and wonder if you’re ready for a 15 minute war. I’ve answered that question several times and physically I know that I am, and mentally, it’s just gonna be a great fight.”

Will there be a repeat though? Could they possibly do it one more time?

“I think we’re both wired the same,” said Garcia, and nothing more really needs to be said to explain that sentence, but for the one or two of you who didn’t see the first fight, he will. “We’re both gonna go in there, look for different avenues, but I think at the end of the day, when we find each other, it’s gonna be the same street that we went down.”

“Me and him went in there and gave each other everything we had and still understood that it was a sport,” he continues. “When a guy can take everything that you’ve given him and gives it back to you just the same, it’s a respect level that’s unfound anywhere else.”

Leonard Garcia has earned that respect – from Jung, from his other opponents, and from the fans. If any fighter should never hear boos for the rest of his career, it’s this one. And he’s well prepared to continue to do his part.

“I’ve gone on record and said before that due to my fighting style I don’t think I’ll have the longevity of some of the other guys that don’t get hit that much or maybe don’t put themselves in danger as much as I do,” he said. “With that being said, every time I go out, everybody always tells me to be a little smarter this time. Don’t just run into stuff trying to get stuff. Try to be a little more technical. But whenever I get out there and it’s a fight situation, I don’t really look back at that. I think ‘if I take this chance and I get it, the reward is gonna be great and the fans are gonna love it.’ I definitely put myself in some bad spots, but that’s due to me wanting to put on a show.”

Well, then consider this the written version of a standing ovation.