"I’m submitting guys again, I’m beating people up again, and I’m not
missing six punches, I’m landing six of ‘em. I haven’t been this excited for a fight in a long
time." - Leonard Garcia 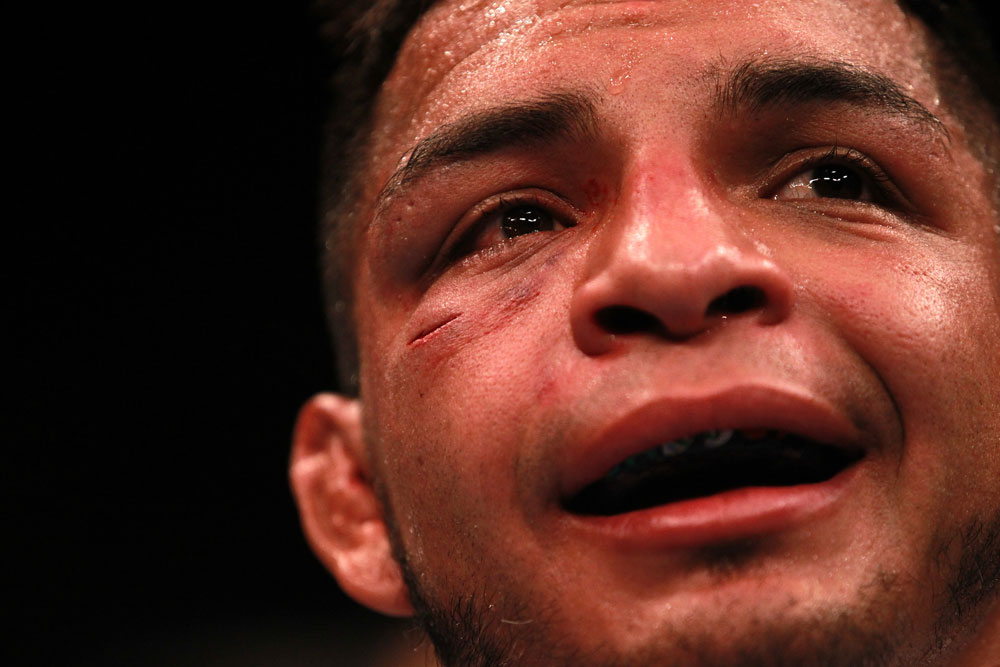 Despite being in the midst of a three fight losing streak, Leonard Garcia is in a remarkably good mood heading into his UFC 155 bout with Max Holloway this Saturday in Las Vegas. Of course, the affable and smiling featherweight rarely strays from the sunny side of the street, attitude-wise, so this might as well be business as usual for the Texan. But when you ask him where he sees himself heading into what may be the most pivotal fight of his 13 year career, nothing changes in his demeanor.

Some fighters are just like that, needing that proverbial back against the wall feeling to truly bring the best out of them. For Garcia, it was a feeling that listening to everybody else and not his own gut had taken away what always made him special. So in an effort to get better and show off different aspects of his game while letting fans know that he could be disciplined in the Octagon, he got civilized. And everyone knows that in the Octagon, Garcia is at his best in the midst of chaos, not a civilized mixed martial arts match.

“It took a lot of swallowing of my own pride to realize that the work that I was doing was good, and I was trying to learn different things and trying to turn different corners, but I was just trying to do that to be considered a smarter fighter, not just a brawler,” he explains. “But then I started to think ‘man, I used to nip on Cowboy (Cerrone)’s heels whenever we were training. I used to do these things and I used to challenge him and now I’m getting outclassed by these guys. My focus was on being competitive and not winning, and trying to be a smarter fighter, but not an effective fighter. That wasn’t my forte. My forte was to go into fights, get in there, grind it out, push the guy really, really hard, and get a victory. I started to think ‘man, how come my skill set keeps dropping?’ And the reason was, I would learn a move, and instead of going over it a hundred times like I’m supposed to, I would learn the move and try to make it seem like ‘okay, this is the technical way of doing it, and this is the way it should be done.’ But everybody knows me, man. I don’t do things the technical way. I make things look chaotic. If I’m going for an armbar, it looks like I’m going for a triangle or omoplata, and I end up getting an armbar. (Laughs) That’s just my way of doing things. I’m more reckless about it, and I really go in there and make my own way of doing stuff and it worked for me for all those years, and I tried to change it for the fans’ point of view.”

Since 2011, Garcia hasn’t entered the winners’ circle in the UFC, getting submitted by Chan Sung Jung in their rematch, losing a Fight of the Night decision in another rematch against Nam Phan, and then dropping a three round nod to Matt Grice. Each fight was competitive, but Garcia couldn’t get over the hump to get his hand raised. Along the way, as he promised a more disciplined and technical fighter, his longtime fans wondered where the old “Bad Boy” had gone.

“They were like, ‘We love you, man. What are you doing different?’ ‘Where’s the old Leonard? What’s going on?’ ‘Yeah, you’re getting these Fights of the Night, but you used to get in these situations and win. Where is that guy at?’” recalled Garcia of the reaction to his losing streak, which was mixed in with various injuries that kept him from fighting at the rate he wanted to.

“The training wasn’t doing what it was supposed to be doing,” he said. “I was trying to make something that I wasn’t. It was tough to deal with because I knew I was in there doing the right things. I was in there working, trying to figure things out, but I wasn’t making it my own stuff. And it took the three losses to make me see.”

Luckily, in this sport, three losses can be quickly erased by one win, at least from a mental standpoint, and even with a late change in opponent from Cody McKenzie to Holloway, it doesn’t matter to Garcia as long as he brings his old style back to the Octagon in order to fight his fight.

“I’m submitting guys again, I’m beating people up again, and I’m not missing six punches, I’m landing six of ‘em,” said Garcia of his prep work for the fight. “I haven’t been this excited for a fight in a long time.”

When you hear that from someone who will often break out with an ear to ear grin in the midst of a prize fight, that means something, and the 33-year-old hopes that while Saturday’s bout is the end of his 2012 campaign, maybe it’s going to be the start of something big for next year.

“I really want to come into my own this next year,” he said. “I’ve been working hard in the gym and I feel like this is something that needs to happen for me. It’s really important that I stay healthy and actually make a run. I need to bring the name Leonard Garcia back up to standard, and to do that I have to be active and fight at least four times a year. It took a lot of soul searching, and I feel like I’m back, and 2013 is gonna be my year, God willing.”