Leonard Garcia: Gearing Up for another Dogfight

"I feel like my skills are getting better, I’m actually listening and
paying attention, and just getting stronger, physically and spiritually." - Leonard Garcia 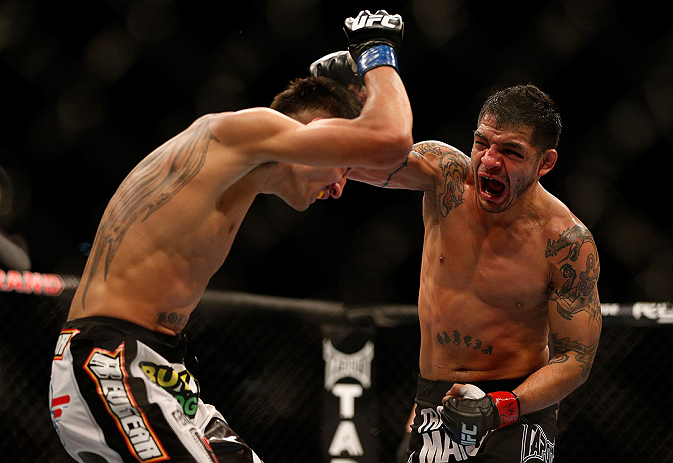 Over the course of 30 professional MMA fights, you would guess that Leonard Garcia has taken harder shots and been in worse situations, but when asked about the walk he made from the Octagon to his locker room after losing a controversial decision to Max Holloway at UFC 155 last December, he called that trek “the scariest” he’s made.

“It’s the worst feeling in the world,” said Garcia. “It feels like you just got fired from your job. I remember walking back and immediately, I couldn’t hold the emotion. I sat down in my chair, I held my head low, and everybody was coming in and trying to give me a handshake and telling me that the judges had robbed me, but none of that mattered.”

The loss was Garcia’s fourth straight, a string that will usually get a fighter cut from the organization. But Garcia isn’t your average fighter, and in the fight against Holloway, it was clear to most observers that he deserved better from the judges. Telling him that in the aftermath of the defeat wasn’t going to be much consolation though.

“It wasn’t until I looked up and saw (UFC matchmakers) Joe Silva and Sean Shelby come back there,” he recalled. “They told me that it was the best I ever looked, I was doing all the things correctly, and don’t worry about a thing. And once I heard that, nothing makes a loss easy, but seeing those guys come backstage during a show to shake my hand and tell me that everything was gonna be all right, that made it a little bit easier.”

Following the card in Las Vegas, UFC president Dana White added to the chorus of Garcia supporters, telling the assembled media that the job of Texas’ “Bad Boy” was secure. Again, it didn’t sooth the sting of the loss, but it made a fighter know that he was going to get another shot at redemption.

“For him (White) to say the things that he said, I’m training this hard to prove Dana’s instincts right. I feel like he stuck with me through the hard times, and now it’s time for me to show him why he did.”

This Saturday in Newark, New Jersey, Garcia gets that opportunity against Cody McKenzie. The two were originally scheduled to meet on that UFC 155 card last year, but when McKenzie got injured, it was Hawaii’s Holloway who got the call. Yet even though it was a late switch in opponents and strategies, Garcia showed off some of his best form in years against his young foe, who the 33-year-old has nothing but praise for.

“All the credit in the world to Holloway,” said Garcia. “He did do things that were proper, he had good technique, and he went out there and fought a good fight as well. It takes two to give a good fight.”

And after disappointing results against Chan Sung Jung, Nam Phan, and Matt Grice, Garcia finally had a good fight and performance he could build from after a long wait.

“I was kinda like, well, you don’t go back to the drawing board on a win; you do that on a loss,” he said. “And I felt like we had touched on a lot of great things and I used my head movement and started slipping; I was landing punches and doing all the things right. So I came into this camp as a continuation of everything. I was able to get right back in the gym, just start training again, and everything held up. And the good thing about this fight is that I was carrying over the same game plan for the same guy. So all the stuff that we already covered, it seemed like I was already really good at it. McKenzie’s not gonna change much. If he picks up a couple things, then good for him, but we all know what his move is. He’s got a great one, and I have to be sure, just like the last camp, to train as hard as I possibly can to keep my head out of there.”

That move is the former Ultimate Fighter cast member’s self-titled McKenzietine, a guillotine choke that he’s ended 12 of his 13 wins with. And while Garcia’s been putting in countless hours at the Jackson’s MMA gym in Albuquerque working on every variation of defense for the move, he’s also coming into this fight with a different attitude that has no basis in throwing left hooks or working submissions.

“The spiritual side of everything that I’ve been doing, as far as going to church, reading the Bible, and taking time between training sessions has helped me a lot in my physical game because heading to the gym I get motivated by it,” he said. “I’ve got a couple training partners that ride to the gym with me, and I’ll put on my pastor’s preaching on a CD that he gives because I’m not home in Texas during my training camps, and these guys are listening to this stuff and we’re all getting motivated instead of by rap music or something that would normally get you in the mood to go to the gym. And it’s making me hungry. I feel like my skills are getting better, I’m actually listening and paying attention, and just getting stronger, physically and spiritually. And that’s keeping me ahead of the curve this time.”

If Garcia stays ahead of that curve and gets back in the win column for the first time since his 2010 win over Phan in their first bout, it just might be the catalyst for him to return to the form that saw him earn a WEC featherweight title shot in 2009.  But part of his new attitude means dealing with what’s in front of you first. And that’s Cody McKenzie.

“If you pay attention to Cody’s fights as I have and you watch him, he’s extremely well-rounded, and a guy like that’s dangerous,” said Garcia. “But the thing I think it’s going to boil down to in this fight is if either one of us can find our finishers. I know what he’s gonna try to do, he knows what I’m gonna try to do, so we’re both gonna look for it, and if neither one of us can capitalize right away, it’s gonna turn into a dogfight and at the end of the day, I think my track record in dogfights is a little bit better than his, so I like my chances.”