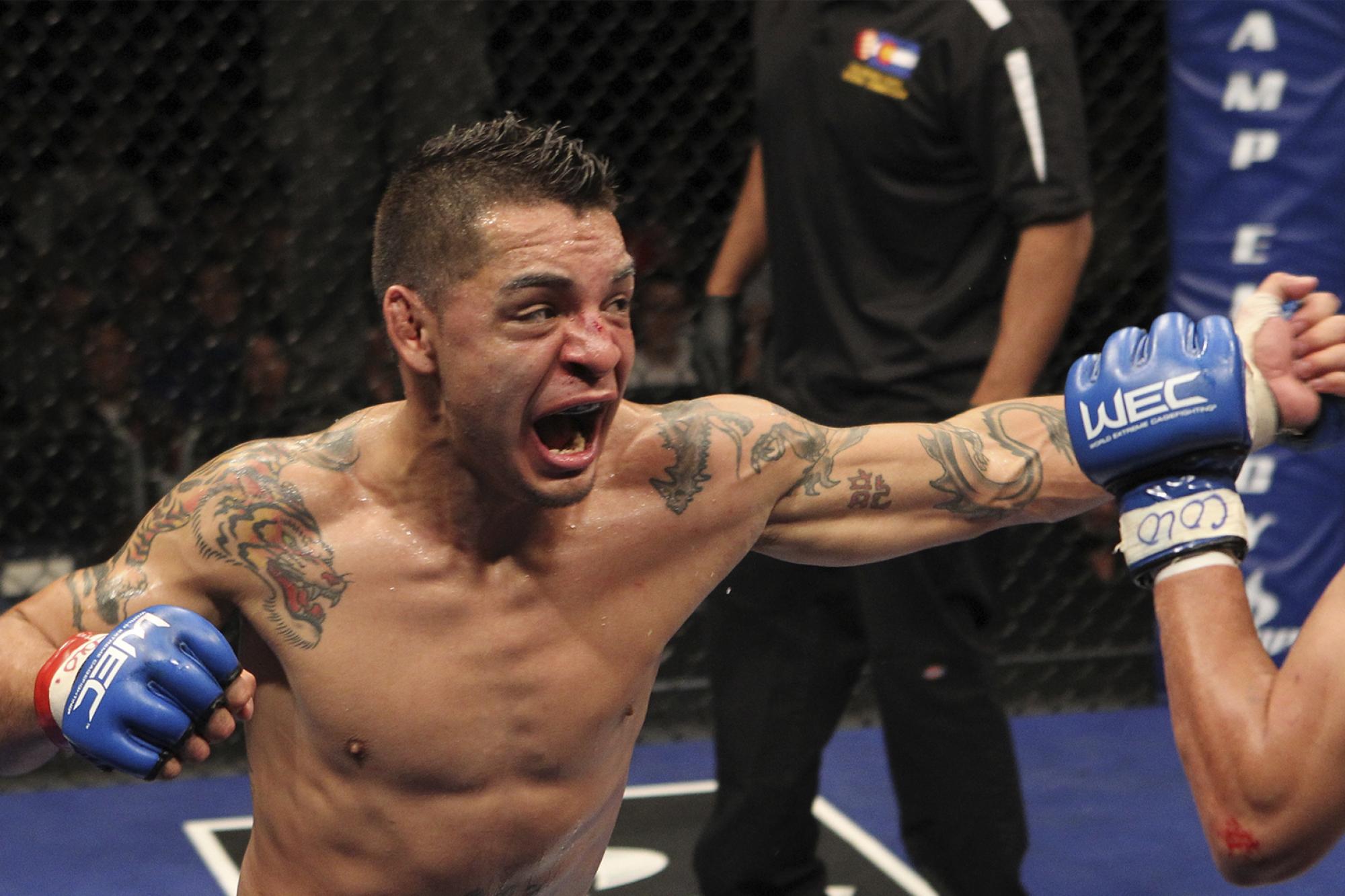 Leonard Garcia: The Face Of The WEC

Leonard Garcia's memorable performances made him one of the WEC's biggest stars. Look back at his journey.
By Walker Van Wey • Dec. 21, 2020

The hands down favorite for “Face of the WEC” is probably pretty obvious to most fight fans. Urijah Faber made it cool to fight for the WEC, proving that there was an abundance of toughness and intensity behind the men in the blue cage.

One of the men who “The California Kid” was representing was a man whose grit paved the way for Faber, Jose Aldo, Donald Cerrone and everybody else who called the WEC home, Leonard Garcia.

Making his debut at WEC 1, Garcia rubbed shoulders with some of the most decorated names in MMA history. Despite fighting on a card with Dan Severn, Travis Fulton and more, it was Garcia’s performance that lives in WEC dark era folklore.

While Garcia’s head kick KO over Victor Estrada doesn’t compare well to the visual of “The Showtime Kick,” the first head kick in the WEC came with a backstory worth the utmost respect of anyone with an appreciation for MMA.

“I was having a 104-degree fever from having a broken leg in a car with six other guys when three out of the six just fought, the other three were cornermen,” Garcia said. “I remember when we were in Arizona and it felt like the air conditioner wasn’t working anymore. I was sweating like crazy, my leg was pounding, it was turning black and almost the size of an elephant leg. I said, ‘Listen, we need to get to a hospital.’”

At the same moment where everything went right, everything went wrong for Garcia. The impact of his head kick KO had fractured his leg. Enough of the bone was still attached that mobility wasn’t an issue and enough of the adrenaline was pumping that pain wasn’t an issue either. The wild west days of MMA were especially cruel to Garcia that night as he fought at the bottom of the card and had to drive 18 hours from Lemoore, CA to Plainview, TX afterwards. Fearful of the horror stories that plagued regional MMA, Garcia’s emergency stop and broken leg were possibly the least of his worries if his hospital visit went ignored by the WEC execs.

“I remember being in the ER and thinking to myself, ‘if this guy doesn’t answer the phone and he acts like nothing, these people are going to think I’m crazy,’” Garcia recalls. “Thankfully, Reed (Harris) answered and talked to them. They put me in a cast, gave me some crutches and some pain medication, so needless to say I don’t really remember anything else all the way to Texas. They took really good care of me.”

A feel good story about one of the most historically successful MMA organizations of all-time being able to take care of an injured fighter seems obvious, but for a 6-1 fighter just barely of drinking age at a promotion’s first show, it was far from a certainty that he would be taken care of.

“If he wouldn’t have answered the phone, then yeah, I probably wouldn’t have fought for him again,” Garcia explains. “There’s organizations like that all over the place back then and I honestly think because of what he was able to do that day and he was able to show me who he was as a man, I think that’s why the WEC made it as far as it did and is still talked about ten years later.”

To celebrate the 10 year anniversary of the final WEC event it's officially #WECMonth!!!

To get us started, @jimmyflick is here to warn you about what's to come!

Prepare for the ultimate trip through the WEC all December long! pic.twitter.com/ePnw7TPseg

Harris’s generosity that night at WEC 1 was so telling that after a memorable stint in the UFC, Garcia came back to the WEC until the final days ten years ago. As the only fighter there from WEC 1 until the end, Garcia put on some of the greatest fights in WEC history.

To this day Garcia has never forgotten about Harris taking care of his medicals that night and, as a result, they remain close friends to this day. A fighter who was truly happy to lay it all on the line every time he fought and a promoter who took care of his fighters at all costs just seem to go together like peanut butter and jelly. It’s a friendship that long exceeds the “promoter/fighter” arrangement, and it speaks to this better than words ever could.

“Reed is probably one of my favorite people in general, man,” Garcia said. “Me and Reed have a great relationship. He’s probably one of the best guys out there. Being able to fight for a guy like Reed was a big deal and when we transitioned over to the UFC and he was still there, it really made me happy to see.”

While happy to have Harris as a close friend, Garcia can’t help but smile when discussing the mark he made on the WEC since the day they opened the doors in Lemoore, CA, and you can’t really blame him.

“It was crazy to sit back and go back through all that,” Garcia explained. “It’s nuts that I was there in the very beginning. I think it was just supposed to be that way the way it all played out. I honestly think I had the best fight in the WEC. ‘The Showtime Kick’ was also an awesome way to cap off the WEC as well, but being there from the very beginning, being the only guy who was, talk about the right place at the right time.”

For the entire WEC library sign up TODAY for UFC FIGHT PASS!