Leites Surprises with KO of Smith

Grappling wizard Thales Leites showed off his stand-up attack in his UFC Fight Night bout with Trevor Smith Friday at du Arena in Abu Dhabi, with the Brazilian using a series of right hands to drop and finish his foe in the first round.

“I was waiting to throw my right hand over his jab and it worked perfectly," said Leites. "I had been training for this for a while and when I had the opportunity, I went for it.  It happened just as I pictured it.”

Before the two even had a chance to go to the mat, the middleweight veteran stunned Smith with an overhand right. A short right put the American on the mat, and after a follow-up barrage, referee Neil Hall stopped the bout at the 45 second mark.

Heavyweight prospect Jared Rosholt mauled and brawled his way to a unanimous decision victory over Daniel Omielanczuk, who had no answers for the Texan’s wrestling attack.

Rosholt (10-1) used his striking effectively to set up a takedown in the opening minute, and while Omielanczuk (16-4-1, 1 NC) attempted to sink in a guillotine choke, it was to no avail. The Polish veteran stayed busy from the bottom, but it was Rosholt staying in the top position as he fired off punches and tried to work for his opponent’s arm.

Omielanczuk was able to avoid Rosholt’s first takedown attempt of the second round, but the next one landed for the American, who landed in side control. While on the mat, Rosholt upped his work rate from the previous round, punishing his foe until the two rose with 90 seconds left. Omielanczuk finally found success with his strikes, but the fighters soon wound up back on the mat, with Rosholt again in control until the bell.

The crowd grew restless when the fight returned to the mat in the early moments of the final round, but Rosholt didn’t care, as he continued to fire off strikes as he mauled his opponent until bout’s end.

Debuting UFC featherweights Jim Alers and Alan Omer both impressed in their first Octagon bout, with Alers pulling off a close split decision win in an exciting three rounder.

Omer was on target with his strikes early, prompting Alers to tie up his foe in order to regroup. 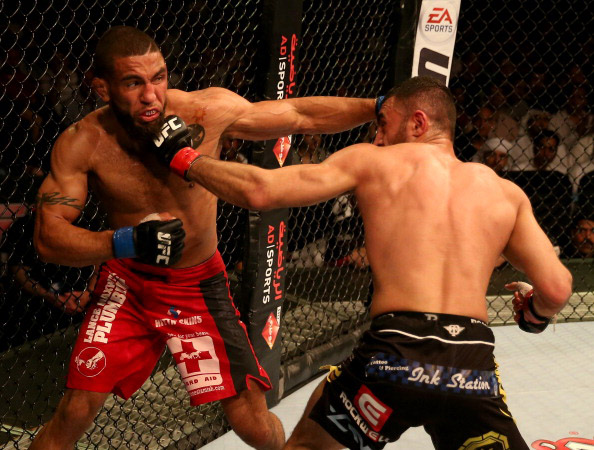 After breaking, Alers got his offense going, resulting in some nice exchanges. Midway through the round, Omer rocked Alers briefly with a right hand, but the Floridian quickly recovered. The two locked up against the fence for much of the final two minutes with a late stand-up flurry by Omer allowing the Iraq native to end the frame strong.

The right hand of Omer stunned Alers seconds into round two, with the American immediately looking for a takedown in response. Omer defended well and fired off ground strikes before Alers made it back to his feet. But just when Omer looked to be on the verge of a stoppage, Alers was able to send the Germany native to the deck. From there, Alers took the top position and cleared his head until Omer rose with a little over a minute left.

Alers got a takedown to start the final round, and he fired off some hard shots, cutting Omer, before the two rose. Alers followed with another takedown midway through the stanza, ad with his ability to control his foe on the mat and keep busy enough to avoid a re-start, he was able to wrap up the last round, even though Omer ended the bout with a takedown of his own.

A clash of heads brought a quick end to the bantamweight opener between Johnny Bedford and Rani Yahya, with a no contest being ruled when Yahya was unable to continue after the unfortunate occurrence.

Bedford wanted to get the fight going as soon as possible, but it finished just as quickly, as an exchange between the two resulted in a clash of heads. Bedford walked away with a cut on his forehead, while Yahya fell to the canvas, dazed, as referee Neil Hall stepped in to stop the fight at 39 seconds of the opening round.