Matt Serra is one of the most respected and beloved figures in mixed martial arts; a fighter who authored the greatest upset in UFC history to become an unlikely champion who has since morphed into an outstanding coach and exuberant character in various video blogs and web series. 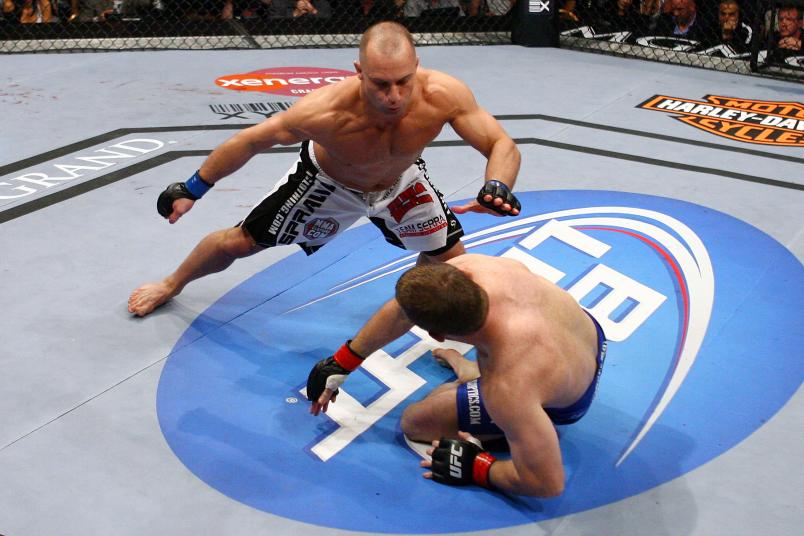 The 44-year-old New Yorker is also one of the greatest interviews in the sport — someone who can wow you with his ability to recall details and facts about fighters and events, but also have you in stitches thanks to his self-deprecating wit and natural comedic timing.

So when tasked with talking to the former welterweight champion about his first foray into the Octagon at UFC 31 against Shonie Carter, all I had to do was turn on the recorder and let the Brazilian jiu-jitsu black belt do his thing.

“I’m pretty sure it’s called ‘Locked and Loaded’ and it was at the Trump Taj Mahal in Atlantic City in May 2001,” he says, correctly recalling the tagline for the May 4 fight card that remains one of the best in UFC history.

Before getting the call to the Octagon, Serra was a 4-0 fighter dominating the competition on the sparse East Coast Regional scene.

The first American black belt under Renzo Gracie, the compact and confident Serra was one of the best grapplers in the world for his weight class, having earned a silver medal at the 2001 Abu Dhabi Combat Club Submission Wrestling World Championship just a few weeks prior to stepping into the cage with Carter. 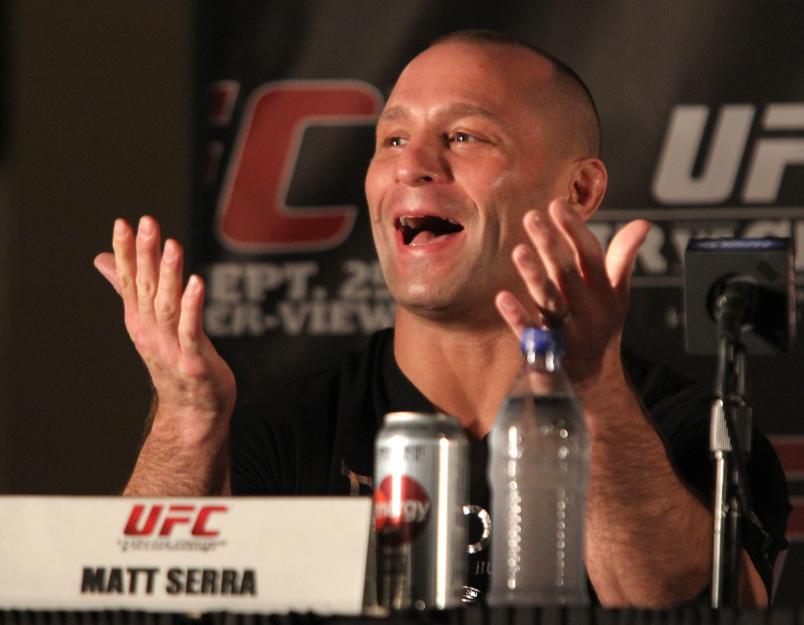 He obtained some tape on his impending opponent, who already boasted an 18-5-5 record that included wins over the likes of Dave Menne, Keith Wisniewski and Chris Lytle. Serra liked what he saw.

“I knew he had some good wrestling,” he says of Carter, a flamboyant performer who amassed 51 career wins and 91 appearances before finally hanging up his four-ounce gloves. “I believe he fought a guy named Brad Gumm who he had a good fight with in the UFC.

“I remember watching some tapes on him and thinking, ‘He’s got good wrestling, but that will lead to my jiu-jitsu. He’s kind of slow standing.’ I wasn’t overly impressed, but I was definitely super-excited because he came out dressed like a ‘70s character with a weird hat. All he was missing was the fish-tank shoes from I’m Gonna Git You Sucka.

“I thought he was a great opponent for my first fight in there, but I thought I was going to smoke him for sure. I saw him get in positions in other fights that I know if I had him there, I would finish him.”

Over the years, fighters, analysts and observers have long discussed the concept of “Octagon Jitters” — a nervous feeling that washes over competitors when they graduate from smaller shows on the regional circuit to competing on the biggest stage in the sport. Everyone thinks they’re going to handle the transition with aplomb and roll into their first UFC fight like it’s no big deal, but more often than not, post-fight conversations and later career reminiscences reveal that that first trip out to the Octagon was accompanied by a different set of emotions and unique energy that was never present in previous appearances.

“Up until that point, I had never lost a fight and I had never gone more than three minutes in a fight, but I never had a battle. I destroyed everybody because I was better than everybody on the floor." 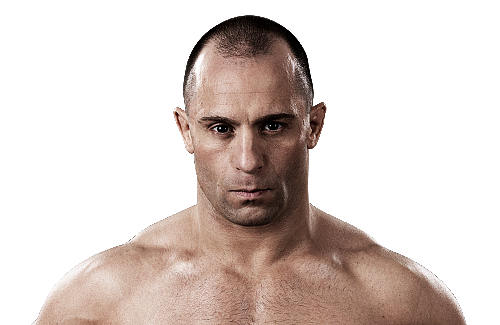 While the atmosphere around UFC events is old hat for Serra now following his 14-fight career in the Octagon and innumerable appearances alongside longtime friend and coach Ray Longo in the corners of their charges, that first experience was something entirely unexpected and left the debuting fighter dealing with a weird type of tunnel vision.

“One thing that really shook me and I think this is what shakes a lot of guys that fight in smaller promotions and then go into the UFC is the production,” says Serra, who had never previously dealt with any kind of nerves or anxiety prior to competing. “There is a nervous energy around that you’re not used to and that adds to your own anxiety.

“You’ve got cameras in your face and you’re not used to that and people are yelling, ‘In 10 minutes you’re walking’ and they’re nervous to get their job right and you feel that. You’re not used to any of that behind-the-scenes stuff that feels as regular as anything to me now, but back then, I wasn’t used to it and it’s almost overwhelming.

“I remember sprinting out to the cage in my gi and being excited, but having extreme tunnel vision and that was very odd for me,” he adds. “It wasn’t a scared feeling, it was like things were in 3D and it was pretty wild.”

After receiving final instructions from referee Mario Yamasaki, the fight began and Serra and Carter delivered a barnburner.

Unfortunately for the charismatic future champion, his first foray into the Octagon ended with him on the business end of one of the most memorable finishes in UFC history.

“I was super-aggressive and got him in a lot of bad positions, but one, I didn’t know how to pace myself, and two, at that time, I did not clock in enough rounds just straight up sparring and kickboxing,” says Serra, reflecting on the bout 17 years later. “Everything was designed to get the fight to the floor. The inexperience cost me the fight, but you know, all I wanted to do was get him.

“There were no setups. I kicked him in the head in the first round and that shook him because he thought I was going to take him down. I haven’t seen it in a while because I don’t like to watch it, but it was a helluva fight and I’ll tell you, I lost that fight with less than 15 seconds on the clock.

“I was in the guard and I could have stayed in the guard — and who knows what would have happened if it had gone to the decision because it was a close fight, back and forth — but I got up, I got away and I just ran at him, haphazardly.”

The finishing sequence is one most fight fans remember vividly.

After trying to connect a triangle choke in the final minute of the third round, Serra scrambled to his feet with 20 seconds remaining in the fight.

Both men backed up to reset and as Serra started to press forward, Carter threw a left kick that sailed by without connecting, but spun and connected with a perfectly placed backfist that sent Serra tumbling to the canvas.

“Just a thought of, ‘I’m gonna get him!’ and Shonie, with the experience that he had, just faked a little kick, spun around and I ran right into a backfist,” says Serra. “It was a highlight that probably to this day you’ll still find it. I believe it was the first spinning backfist knockout in the UFC.

“That thing was a great highlight and I would like to think it kept me humble.” 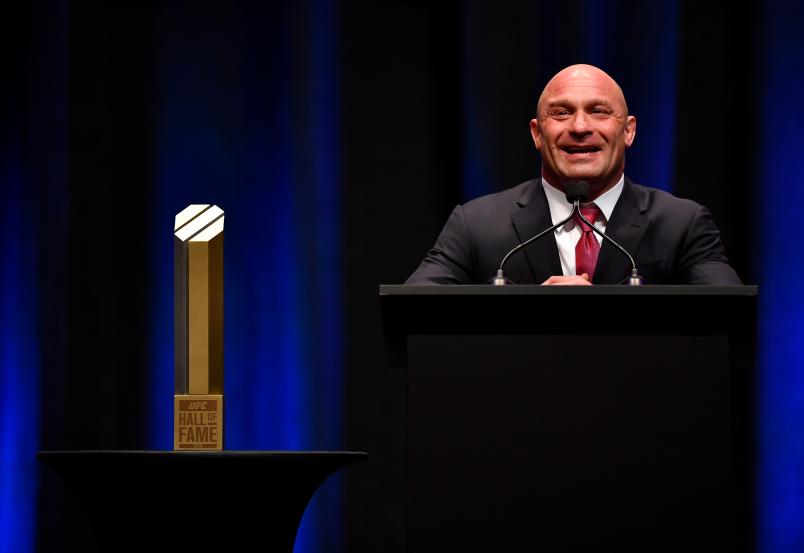 In the moment, the prideful competitor was stuck dealing with all the emotions and feelings that accompany a loss, all of which were magnified because it took place so close to home and in front of countless friends, family members and students.

But after receiving positive feedback from both Dana White and Lorenzo Fertitta after the bout, the disappointment quickly dissipated and was replaced by a sense of accomplishment and a drive to improve.

“I felt like s*** because I had never lost and I had all my students there because I taught in Long Island and I taught at Renzo Gracie’s and I got laid out by a guy in a Speedo who dresses silly,” laughs Serra. “I remember people saying, ‘His standup sucks; nobody ever got caught with that.’

“Up until that point, I had never lost a fight and I had never gone more than three minutes in a fight, but I never had a battle. I destroyed everybody because I was better than everybody on the floor.

“Did I mention I won the rematch?” says Serra, who avenged his UFC 31 defeat with a victory over Carter in the semifinal round on Season 4 of The Ultimate Fighter, a triumph that helped propel him to the biggest win of his career.

“I was hooked,” he adds. “It’s not like I lost and thought, ‘That’s it for me.’ People loved the fight, but they thought I sucked standing, couldn’t crack and egg, but ‘We got something for them, Longo!’”

Five years, 11 months and three days later, Serra would indeed show the world what he and Longo had been working on for all those years, but as he says, “That’s a story for another day.”