NEW YORK – Freddie Roach is used to big events. Being the trainer for boxing superstars like Manny Pacquiao and Miguel Cotto will do that. But as Roach watched former UFC welterweight champion Georges St-Pierre go through his paces in an open workout for fans and media Wednesday at The Theater at Madison Square Garden, the Hall of Famer didn’t seem jaded at all. In fact, he was enjoying the fight week leading up to St-Pierre’s challenge of Michael Bisping in the main event of UFC 217 on Saturday.

“It's good, it's interesting,” he said of the new atmosphere. “I got new clothes.”

Roach laughed as he showed off his Team GSP gear, clearly taking everything in while keeping an eye on a pupil who wanted him in his camp and corner for his first fight since November 2013. But this isn’t a recent alliance, as St-Pierre and Roach have worked together for a long time dating back to GSP’s reign as 170-pound champion.

“I've been training Georges for the last five years and he wanted me to be part of the camp,” Roach said. “He feels that he does his best when we're together and I help his boxing game. He's a great wrestler also, but our opponent is a pretty good boxer, so we've incorporated some really good boxing techniques.” 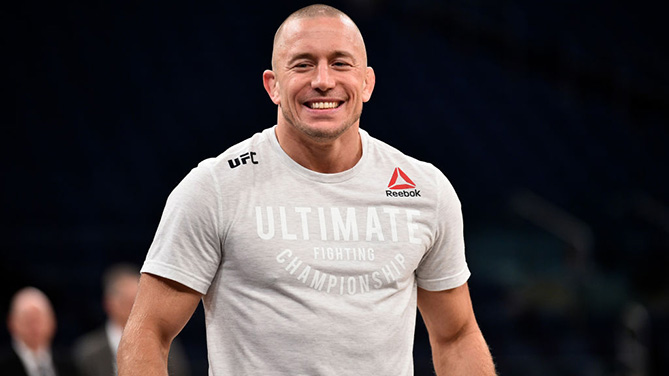 Calling Bisping a “good boxer” whose best weapon is the left hook, Roach knows that on Saturday it will take more than boxing to beat the champion, so with St-Pierre’s longtime coach Firas Zahabi also working on the gameplan, this meeting of two of combat sports’ best minds could produce a better GSP than fans have ever seen. That’s an intimidating thought considering that the Montrealer already has a resume that will land him in the UFC Hall of Fame.

But for Roach, it’s not about ego and adding “trained a UFC champion” to his resume. Instead, the 57-year-old’s motivation is about keeping a promise and making sure his fighter is the best he can be on fight night.

“Georges is a real nice guy,” Roach said. “I've trained a lot of UFC fighters before in my lifetime, but no one as close as Georges. This is why I made the time for him. I was supposed to be in camp with Cotto right now, but I made time to be with Georges because I promised him that I would do it. I said I'll be part of your next fight and so here we are.”