While the women’s featherweight title is officially on the line next weekend at UFC 219 in Las Vegas, many of the pre-fight questions directed towards champion Cris Cyborg and challenger Holly Holm have centered on their respective legacies, with good reason.

Undefeated for more than a decade, Cyborg has established herself as the most dominant fighter on the ladies’ side of the sport, amassing victories over the likes of Shayna Baszler, Gina Carano, Marloes Coenen and Tonya Evninger while collecting championship gold in both Strikeforce and Invicta FC before claiming the vacant UFC featherweight belt in July.

After amassing a 33-2-3 record and multiple world titles during her 11-year boxing career, Holm transitioned to mixed martial arts and maintained her championship ways, shocking the world with her second-round knockout win over Ronda Rousey at UFC 193 to become the first combat sports athlete – male or female – to win world titles in both boxing and MMA. 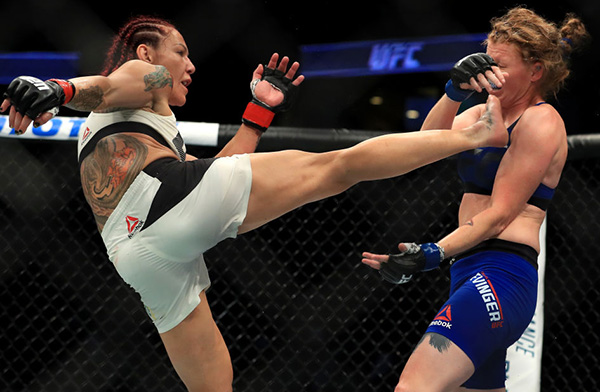 Tonya Evinger during their Featherweight Title fight at UFC 214 at Honda Center on July 29, 2017 in Anaheim, California. (Photo by Sean M. Haffey/Getty Images)" align="center" /> Given their lengthy, impressive resumes, it’s understandable that fans and media are wondering whether if the winner of next Saturday’s main event clash at T-Mobile Arena will be ready to declare themselves the greatest female fighter of all-time, even if neither member of the main event tandem is ready to wade too deep into those discussions at this time.

“I know that a win like this would definitely be a huge thing for my legacy and my career,” Holm said during Thursday’s UFC 219 media conference call. “But it’s definitely not something that would just define it right now. Even with a win like this, I would still want to push forward and be succeeding after this fight.

“It would definitely be a huge win for me,” added Holm, who enters the contest off a third-round knockout win over Bethe Correia in June. “It would definitely be huge, but each fight, I want to win just as bad. I know that this is going to be a huge fight – a very anticipated fight; one that a lot of people are excited to watch – but I want to win any fight no matter what.”

“Whenever I go inside the cage, I never think that I’m 10 years undefeated and that I’m the champion,” explained Cyborg, who pushed her record to 18-1, 1 NC with her title win over Evinger at UFC 214. “I never think like that. I leave it to other people to think about me like that; I just have to think about getting better each time I fight.”

For a number of years, the biggest fight to make in women’s MMA was a bout between Cyborg and Ronda Rousey. Although the two went head-to-head on social media and frequently took aim at one another in their interviews, they were never able to meet inside the cage.

Holm played a part in that by unseating Rousey from the bantamweight throne, and though she once longed for the opportunity to face the Olympic medalist inside the Octagon, Cyborg said her attention shifted to eventually facing Holm on that fateful November night in 2015.

“When Holly fought with Ronda, I was really watching that fight,” said Cyborg, who had first met Holm on the set of a movie they filmed together earlier in the year. “Me and Ronda really had a hard time being able to fight each other – she was always just talk, but never wanted to really fight me. 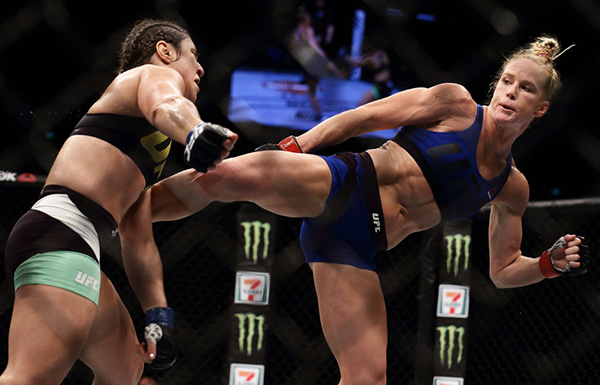 That is what is motivating Holm heading into the final fight of the UFC 2017 campaign, not figuring out where this win stacks up in her list of career accomplishments or where she fits in the pantheon of all-time greats.

“I can’t ever compare the two because they’re two different situations,” Holm said when asked how a win over Cyborg would compare to her thrilling victory over Rousey two years ago. “In my life right now, this is going to be the biggest accomplishment that I can have, but nothing can take away the journey I had and the experience that I had in my fight with Ronda.

“One of my biggest things coming to MMA from boxing was to be able to hold world titles in both boxing and MMA because no male or female had done that yet,” said Holm. “Here we are, I was able to do that and here I am up against another opponent with an opportunity to get multiple world titles in MMA after boxing would be huge.

“Nobody has done that before and it’s a dream of mine to accomplish that.”