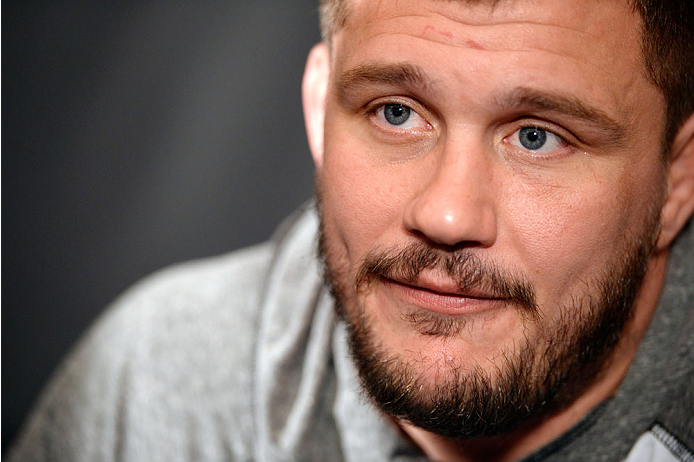 The appeal of Matt Mitrione goes beyond his ability to knock opponents out in the Octagon, though that certainly plays a role. His one-liners, quick wit, and ability to laugh at himself don’t hurt either.

Yet what makes Mitrione who he is may be that for every direction you assume he will go in, he will take the opposite path. Whether it’s by design or just the fact that we can’t keep up with someone who doesn’t fit into the pro athlete box we’re used to, it works for him and it keeps us guessing, hence interested.

So while he seems like the All-American boy, he recently sat through a Def Leppard set but left four songs into a KISS concert. Yes, that’s as un-American as it gets.

“I got bored and split,” he said. “I know a couple songs by KISS, but I think it might have been a bit before my time for my flavor of music. Def Leppard slayed it though. They did such a great job, their stage presence is so good.”

Remarkably, the interview conducted by a childhood member of the KISS Army continued, not simply because it’s my professional duty, but because Mitrione’s honesty is refreshing, not just when dealing with the fight game, but with life.

And life is pretty interesting for the former Ultimate Fighter 10 competitor these days. Getting ready for a Friday fight against heavyweight prospect Derrick Lewis at Foxwoods in Mashantucket, Connecticut, the 36-year-old could be on the verge of a Top 15 ranking if he can follow up his Performance of the Night knockout of Shawn Jordan in March with a similar finish of Lewis, someone he didn’t even care to fight when the bout was first presented to him in July.

“I had no idea who he was,” Mitrione said of “The Black Beast.” “I had never even heard his name before. I was having a great time at the (Ultimate Fighter 19 Finale) show, and he (Lewis) was talking about something (following his finish of Guto Inocente). I had no idea because I wasn’t listening to him, and then all these people turned around and were like ‘he just called you out.’”

Mitrione turned to a friend and smiled.

“Apparently that guy just called me out.”

“Yeah,” the friend responded. “He called you out twice.”

The next day, the UFC called with an offer for a fight against Lewis.

There would be a second call.

“As nicely as the UFC can say it (Laughs), they said ‘hey, we’d really like for you to take this fight,’” Mitrione recalled. “‘All right, I guess I’m gonna fight this dude in September.’”

He will, and while he might have seen it as a no win situation at first, it’s really not. Lewis is a hot prospect with a lot of buzz around him following back-to-back knockout wins in the UFC, and if Mitrione can derail the Lewis Express on national television, that’s a big deal, especially when you’re 36 years old. The Indiana product doesn’t shy away from his age, but he does feel that finally, he’s got a grip on this mysterious game.

“I meant it when I said I’ll fight anyone ranked above me, and I feel like I’m at that point where I’m good enough for that and I’m knowledgeable enough for that,” he said. “I might go in there and get my ass kicked by this dude (Lewis) and I could be completely wrong and be embarrassed I said this. But I feel like I’m that good and that I’ve finally turned a corner and my best time is ahead of me.”

But there is still that Mitrione penchant for making left turns when you think he’s going right, and this camp is no different, as he opted against going to Florida for the entire summer to work with the Blackzilians camp, and instead stayed home in Indianapolis, where he put together a training squad that only he could.

“I’ve got four wrestlers that are all giant dudes,” he said. “We call ourselves Team Two Ton, and everybody has to cut to 265. I’ve got guys that are walking around at 290-300 pounds that are pretty damn good wrestlers and grapplers.

That’s the work part. The other parts of Mitrione’s decision to stay local are named Jacob, Jonah, and Gia, his three kids with wife Tina. And for all the jokes and light-hearted banter, when it comes to his children, that’s where Mitrione’s heart is.

“It’s pretty well documented that I travel a whole lot,” he said. “It’s summertime, my kids weren’t in school, and I really wanted to be around them as much as I possibly could because I miss so much time with them as it is.”

That’s the price he’s paid for the life he leads as a pro athlete. It’s probably not what he expected after his career as an NFL lineman ended, but again, becoming a prizefighter – and a successful one at that – was a left turn nobody saw coming. He still misses the game, especially now when the season’s about to start, but it’s something he won’t stop watching.

“I really miss the game, I really do,” Mitrione, who played for the Giants and Vikings, said. “Seeing everybody in camp and seeing the stupid haircuts. (Laughs) Since I was a bubble guy, when I watch a preseason game, I watch the third and fourth quarters. I watch the guys that are probably going to get cut, but I look for the diamond. And there’s going to be one or two that you’re going to find.”

You could say Mitrione is a bubble guy in the UFC right now, on the verge of either moving into the top 15 and up the ranks, or risking a fall into the category of ‘opponent.’ He’s not about to become anyone’s stepping stone, not when he feels he has more snaps left in him.

“My immediate response was no, you cannot play,” said Mitrione, keeping that left turn theme going as if almost on cue.

Tina asked if he could at least entertain a conversation about Jacob’s request, and he agreed, saying that his son had to present an argument about why he should be allowed to play. Mitrione already had his argument.

“I told him that your body only has a certain amount of snaps and plays in it, and once those plays are done, you’re done. It doesn’t matter if you started in third grade or as a junior in high school. And if your brain is still developing at the rate it is when you’re eight years old, what the hell are you gonna start ramming it into another kid’s head for? It just doesn’t make any sense.”

Mitrione’s explanation made plenty of it though, and with that strong basis in the realities of life as an athlete, he’ll know when his sell by date is approaching, and it isn’t about to show up on Friday. No, Matt Mitrione still has some snaps left, and he’s willing to use a few up on Derrick Lewis.

“I think that there are a lot of things he does that have to keep me humble and grounded here, but I think I’m gonna whup his ass, and he’s going to absolutely be getting the best me you’re ever gonna get,” he said. “If you’re gonna call me out by name, then you’re gonna get everything I got. If you’re good enough to beat me then, then you’re worth your salt, because I’m coming for it.” 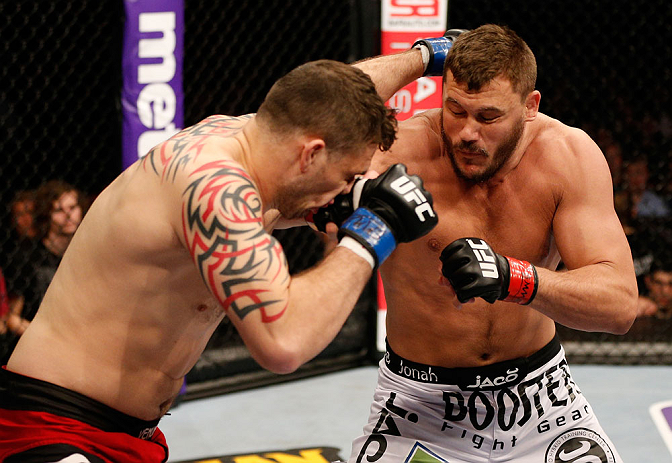