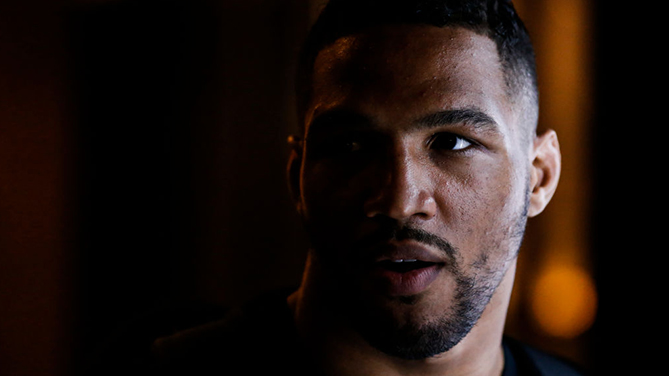 It was a bit surprising that Kevin Lee kept a low profile on the biggest night of the year for the lightweight division. But as Khabib Nurmagomedov, Conor McGregor, Tony Ferguson and Anthony Pettis took the UFC 229 spotlight for themselves on October 6, the No. 5-ranked contender was a bit busy.

“I was prepared to make weight on Friday just in case either one of those four guys stepped out,” said Lee. “I knew it was a longshot, but I cut a little bit on Thursday night. I got down to 168 just in case I got that call.”

Lee, fresh from a career-best win over Edson Barboza in April, is at the point where a second title shot is within reach, so he’s ready for that phone call whenever it comes. Yet while it didn’t come a week ago, the past seven days have been eventful for the “Motown Phenom.”

First, he watched the aforementioned lightweights do their thing in Las Vegas, with Nurmagomedov successfully defending his title against McGregor and Ferguson defeating Pettis.

Then, he got his next assignment – a December rematch with Al Iaquinta that will headline the UFC on FOX event in Milwaukee.

But first things first, and that was the big fight between Nurmagomedov and McGregor.

“I saw somebody in Conor that seemed like he fell out of love with the game and disrespected the game,” said Lee. “You can say as much as you want about an opponent before and you can try to get into his head as much as you want, but the minute you disrespect the game and just come at a man with your hands down or if he shoots that low single and you go over the top trying to outwrestle him, I just saw somebody that didn’t respect Khabib’s skills, he didn’t respect the game, and he paid the price for it. I wasn’t necessarily impressed with what Khabib did; he showed the same holes to me that he’s always had. So I saw it more so as Conor losing rather than Khabib winning.”

Nurmagomedov’s submission win upped his perfect record to 27-0, but Lee has long believed that he’s the one who will put a “1” in the Dagestan native’s loss column. And though he would love to get a shot at the belt now, he believes that next title fight shouldn’t belong to him.

“I gotta keep it real and I think Tony does deserve that shot at the title,” Lee said of Ferguson, who defeated the Michigan native in their 2017 bout for the interim lightweight belt. “There has to be some type of a lineage. There needs to be something like in boxing where they do the mandatory.”

It’s a classy statement to make, and the 26-year-old’s decision to take a low profile when he could have made a lot of noise during the UFC 229 fight week also says a lot about this young man with a plan.

“People keep asking me why I wasn’t there to show my face even more and why I wasn’t involved in this or that,” Lee said. “And I’m like, hold on, I’ve got plenty of time. I’m sitting back and watching these guys and watching their mistakes. And that’s one of the mistakes I saw from Conor. I thought he would have learned something from Floyd (Mayweather), but to come into a fight that arrogant, already thinking that you’ve got it in the bag – that’s what I saw from him and I learn from people like that. It really gave me a lot of clarity and a new sense too of how I should approach things in the future. I’ve got a long time left in this game and there are a lot of big fights to be had, so I’m taking my time with it.”

It’s a wise call from a fighter who is the youngest in the lightweight top ten, but with youth comes impatience. Lee admits that patience is a work in progress for him.

“That’s the hard part, and the patience is something I’m trying to learn a little bit more,” he said. “During fight week when I was around everybody, I sat back and was watching, but there were a couple moments in there when I could have made a big hoopla and a scene. And I’m not gonna lie, that’s always in the back of my head, how do I get the shine back on me, because that’s just part of the game these days. But I said, let me look at this from a better perspective, and it’s easier for me to remove myself and watch and learn and grow and then use it in the future and do what I really need.”

The next opportunity to show how he’s evolved is on December 15 against New York’s Iaquinta, who handed Lee his first pro loss in his UFC debut back in 2014. But a lot has changed since then, something never more evident than when Lee put in a brilliant performance in stopping Barboza in the fifth round. But ask Lee about the bout, and he’ll have more negatives than positives to say.

“I guess I’m my own worst critic, which is a blessing and a curse at the same time, but I really wasn’t too happy with it,” he said of the win over the Brazilian banger. “I saw some mistakes that I still made in there, and now it’s time to fill up those holes. And I saw things that I could have improved on. And those are the things that keep me up at night. I’m a perfectionist. But it gives me an opportunity in this next fight to show that I’m still filling up the holes, still evolving, and as long as I’m in this game, you’re always gonna see something new every single fight.”

That means he’s quite amped up to meet “Raging” Al again, and while some fighters predict quick finishes (and Lee wouldn’t mind one), he’s got a feeling that both he and Iaquinta will need to pack a lunch for this one.

“We do have that history and it is a little bit of redemption for me so I like that part of it,” Lee said. “I get to avenge something that shouldn’t be there. (In the first fight) Al took on a young kid that really had no business being in there, who didn’t know what he was doing, and now he’s facing somebody who’s been around the block a couple times. So I get that little bit of redemption, but mostly, Al’s tough, so he can stay in there for the full five rounds and keep on fighting back, and that’s what’s getting me up because I think it’s really gonna show people a great fight.

“I think there’s a little bit of that in every fighter, where you want to have one of those knockdown, drag ‘em out fights,” he continues. “There’s a small part of me that kinda wants to be dragged through the mud and I don’t know if that’s sick on my part (Laughs), but I think Al is gonna give that to me and I’m gonna turn the man in circles and humiliate him.”

That’s fighter talk. And if he evens the score with Iaquinta, he wants to get around to some champion talk. He’s not in any rush, but when the call comes, he’ll answer it.

“I’ve always been about chasing titles,” Lee said. “I’ve never been about chasing anybody in particular. It’s the title that I want, so now that I know who has that title and who’s the rightful owner, it gives me a little bit easier target. And as long as either one of those men are holding that title, I’m staying there (at 155). I’ve got some bones to pick whether it’s gonna be Khabib or Tony, whoever wins that fight if they do make it. If not, then I’ll steal the shine and get in there with either one of them. I’ve got a title to win off one of those dudes.”