Lee plans to beat Barboza "worse than Khabib did" 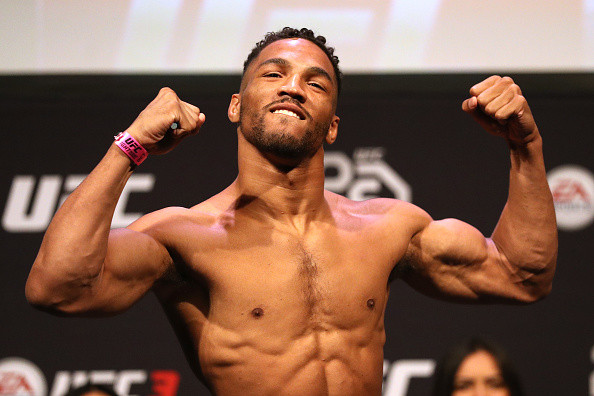 Kevin Lee poses on the scale during the UFC Fight Night weigh-in at the Boardwalk Hall on April 20, 2018 in Atlantic City, New Jersey. (Photo by Patrick Smith/Zuffa LLC/Zuffa LLC via Getty Images)" align="center" />
Kevin Lee isn’t a man of few words. But the loquacious lightweight kept it pithy with an April 7 tweet following Khabib Nurmagomedov’s title-winning effort over Al Iaquinta in the main event of UFC 223.

The first two parts were simple enough to determine, as Lee headlines tomorrow night’s UFC Fight Night card in Atlantic City against Edson Barboza. As for that new motivation?

“You’ve got Khabib running around with this title, and that was the deal with it,” said Lee. “He’s feeling himself and he’s still got that imaginary ‘0’ and my motivation is to give him that ‘1’ and I hope he doesn’t run into anybody who’s gonna do it before me.”

It was the first shot fired at the new champion, someone Lee has wanted to fight for a long time. But there will be no title fights for the “Motown Phenom,” at least not anytime soon, if he doesn’t get the job done against Barboza, who dropped his last fight in December to Nurmagomedov via decision. Lee knows it, and he wants to better the result “The Eagle” delivered against the Brazilian bomber.

“Once I get my hands on Khabib…I can’t wait for it and I think this fight is gonna show it,” he said. “I feel like I’m gonna fight a better version of Edson Barboza. He’s never lost two in a row, and every fight that he lost, when he comes back he’s always stronger and always better, and I’m expecting that. But I’m gonna beat Edson worse than Khabib.”

At the very least, Lee is a believer – in himself and in his skill set – and that belief has made him a polarizing figure as he approaches his 13th fight in the Octagon. Over that time, he’s looked like a world-beater, he’s suffered crushing defeats, and he’s had more than his share of verbal battles with his lightweight peers. It’s a lot to pack into a little over four years, but he’s made an impact, and love him or hate him, fans want to see him fight.

“Sometimes you’ve got to take the energy you’re given and give it right back,” Lee said. “That’s some of it, but I also study the promotional side of the game and I ask questions of people that have already been there and done that, and one of the best things I heard is when somebody said, ‘The same things they’re gonna hate you for is what they’re gonna love you for later. The difference is gonna be you going out there and winning.’ I’m keeping it at that. Yeah, I’m gonna say some off the wall stuff from time to time, but there’s always truth behind it with me. We ain’t reinventing the wheel here; we’re doing the same things and just pushing it into a new era.”

Part of his quest to bring combat sports into a new era involves Saturday’s bout in Atlantic City, a town with a long history in boxing. Michigan’s Lee easily reels off the names of those who made his state famous, including Joe Louis, Tommy Hearns and Floyd Mayweather, and those boxers still have a place in the hearts of those in neighborhoods in the vicinity of Boardwalk Hall. Lee wants MMA fighters to get that same respect.

“I think it’s coming and I think it’s already started,” he said. “You’re getting a couple guys that are starting to hit that celebrity status, and that’s what it takes. It takes that money, it takes that star power and it takes that celebrity to get those eyes on you. But we’re getting there, and in the next two, three years we’re gonna see it explode. That’s how it goes in every other sport. But I’m excited about this so I can show the evolution of combat sports, especially at Boardwalk Hall. There’s a lot of boxing history there. Now I’m here, 25 years old, and I’m showing that we’re in a new era.”

It’s almost hard to believe that Lee is only 25, considering all he’s done since his Octagon debut in 2014, which just happened to take place in New Jersey. Now he’s back in the Garden State. After losing that first UFC bout to Iaquinta, does he feel like he has some Jersey devils to exorcise on Saturday?

“There’s a little bit of that, especially when I’m fighting somebody like Edson Barboza,” he said. “You look at the man and he’s incredible. He’s a human highlight reel. So I’ve got even more of that fire to get it done in a better way than the last time I was in Jersey. And it’s a different approach. The first time I was in there, that was my first fight in the UFC and my first experience of being at that level. Now I’ve been in the big shows, I’ve fought in the biggest venue and headlined that venue, so now I get to see the other side and I’m excited for that.”

In that UFC 216 headlining bout at T-Mobile Arena in Las Vegas last October, Lee lost his first title fight, getting submitted by Tony Ferguson in a clash for the interim 155-pound belt. He admits that it took a little while to shake off the disappointment of that bout, but once he did, he was more determined than ever to get to where he wants to be. The first step is Saturday, and he’s ready.

“It’s all about experience in there,” Lee said. “You can say it as much as you want before the fight, but it is different when you’re going out there and headlining a Pay-Per-View for a world title and you don’t have that experience already. Now that I have that and I understand how to calm my mind down, I know it’s all mental. I think I’m already one of the best athletes in this division. Once I bring that mental aspect up, and that’s been a big focus in this camp, I’m gonna be unstoppable. So I get a lot of confidence out of knowing that, and once I go out there and prove that and show that my mental side is as strong as my physical, there’s not a man in this division that can stop me.”