Lee not worried what people think, he'll keep doing him

When it comes to talking about fights, the fight game, and the big picture he hopes a world championship will create for him, lightweight contender Kevin Lee can get a little intense.

“Kids see these drug dealers and they’ve got the nice cars, the bling, the girls,” said Lee, who headlines Sunday’s UFC Fight Night card in Oklahoma City against Michael Chiesa. “That’s what you want as a kid. But you can work your ass off and still get the same things these dudes got and you can feel better about it because you know why you got yours. You don’t have to hit anybody over the head to get it.”

Lee laughs, knowing that he has hit more than a few folks over the head to reach the top 15 in one of the UFC’s toughest divisions, eight in the Octagon, to be exact. But his point is well taken. In a world where the easy road is king, the Detroit native made a decision a long time ago that the road less traveled could be just as lucrative and even more satisfying to take.

“The only thing I ever wanted growing up is what I have now,” he said. “I wanted to ride in a nice car and be able to put gas in the car. I don’t worry about putting gas in my car anymore. I can remember having two dollars in my pocket and trying to get somewhere; now it’s about something bigger. It’s about the kids. I want to show kids like that you don’t have to do stupid s**t to get the things that you want. You can put in the hard work and the dedication.”

And you can get out of a place that could hold you down. Lee did that when he moved out to Las Vegas at the age of 21 to go all-in on a promising career that has turned into something more than that. At this point, with an 8-2 record and the possibility of a main event win this Sunday, Lee is now expected to do big things. Yet he still keeps Detroit and where he came from in his heart and his mind, and that’s what keeps him from getting complacent.

Lee talks about a teammate who came to Vegas with nothing but a dream and the clothes on his back, and who finally admitted that he had spent six months sleeping in a handicapped stall in a casino bathroom. That’s hunger to become something great, and Lee still has that despite his vastly different life these days.
RELATED: Oklahoma City Fantasy Cheat Sheet | Three fighters On the Rise

“I keep guys like that around me to remind myself that I’m doing it for something bigger than myself,” he said.

Keeping his eye on something bigger also helps him stay patient at an age when most want everything yesterday.

“When you’re doing it, it’s frustrating, but when I look back on it, it’s totally necessary,” the 24-year-old said of the patient climb. “That’s why having a good coaching staff around you is key to me because they see things outside the fight that you can’t see. They see the long-term. Sometimes as a fighter, you get caught up in wanting it right now. ‘I want the toughest fight that I can possibly get right now.’ You don’t really see what it takes to have that experience and go through that and go through these hard, tough fights that really don’t make much sense to you, but in the long run, they do. And that experience is what’s going to put me to that championship level.” 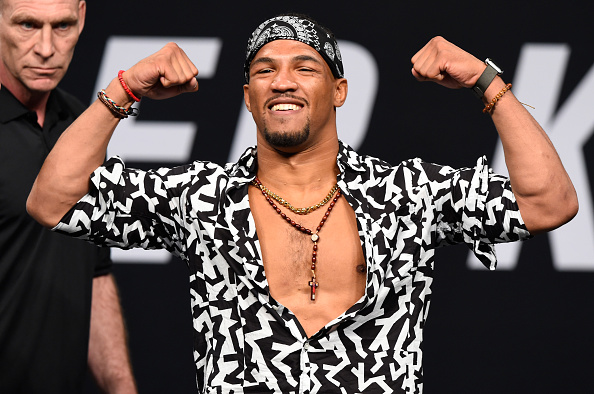 Following four consecutive wins over Efrain Escudero, Jake Matthews, Magomed Mustafaev and Francisco Trinaldo, Lee appears to be getting better with each fight, and if that pattern continues, fans should be in for a barnburner this weekend. Add in a little bad blood from a press conference scuffle a few weeks back, and even more eyeballs will be on this fight. Has that altercation painted Lee as the bad guy? Maybe, but he doesn’t care. He knows who he is.

“People are going to have something to say or hate you, regardless,” he said. “So I’m just trying to be myself and just give people me. I think people who really understand it and people who have really gone through it understand where I’m coming from and the things that I say. Some people don’t, and that’s all right. They don’t keep me up at night or bother me at all. So I don’t mind being the bad guy or being anything. I just am what I am. And when I’ve got the gold wrapped around my waist, they’ll respect it a lot more. They might not love it, but they’ll respect it.”