Kevin Lee likely stamped his ticket to the lightweight top 15 on Saturday night, as he snapped the seven-fight winning streak of No. 11-ranked Francisco Trinaldo while extending his own streak to four at the Olympic Training Center in Fortaleza, Brazil.

Trinaldo easily threw off Lee’s first two takedown attempts, but the third one hit the mark, as the Michigan native dumped “Massaranduba” to the deck in the second minute. Midway through the round, Trinaldo rose to his feet, but Lee remained locked on as they tussled against the fence. With two minutes remaining, a left by Trinaldo staggered Lee, who was forced to look for a takedown again. After coming up short, Lee landed a couple hard punches, but a body shot stalled his progress once again

After a tactical start to round two, Lee scored with a kick to the head that rocked Trinaldo. The Brazilian sought a takedown, but was turned away by Lee, who got into the mount and then took his opponent’s back. Moments later, Lee finished the fight, with a rear named choke producing a tap out at 3:12 of the second stanza.

All three rounds between the highly-regarded jiu-jitsu players looked nearly identical, with Ramos stalking and throwing wild strikes while Moraes was content to keep his distance and pick at his foe from long range, with his right hand a particularly useful weapon. And while the 30-27 scores appeared a bit wide, it was clear that Moraes deserved the nod. 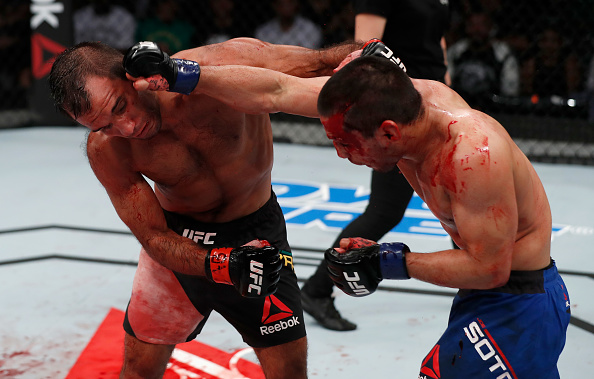 Yahya (23-9, 1 NC) was the aggressor early on, but Soto (18-5) drew first blood with a right hand that put Yahya on the deck a minute in. Yahya fired back with shots of his own, showing the evolution in his striking game, and when the bout hit the mat, he continued to stay in control.

Early in round two, a clash of heads produced a nasty cut on Soto’s head. After a check from the Octagonside physician, Soto went after Yahya, looking to end the bout before the fight was halted due to the cut, but after an initial charge, it was Yahya slowing things down and fighting effectively from the outside. Soto was able to keep the fight from going to the mat, and while the blood kept flowing, Yahya was tiring at the same time, and Soto finished strong on the mat while the Brazilian needed assistance to get to the corner.

As the bout strayed to the mat in the opening stages of round three, Soto surged into the lead with hard ground strikes. With a minute left, the two got back to their feet and while Yahya got some shots in, the round and fight ultimately belonged to Soto.

The fourth consecutive win of lightweight Michel Prazeres was his most important yet, as he scored his first finish since 2012, submitting Joshua Burkman in the opening round.

Prazeres blitzed Burkman at the start, throwing a barrage of hooks at the American. Remarkably, Burkman was able to weather the storm and avoid a stoppage, but he was put on his back by “Tractor,” and moments after they hit the deck, Prazeres closed the show with a north-south choke that produced a tap out at 1:42 of the first round.

Unbeaten Jeremy Kennedy kept that perfect record intact in his UFC featherweight debut, as he defeated Brazil’s own 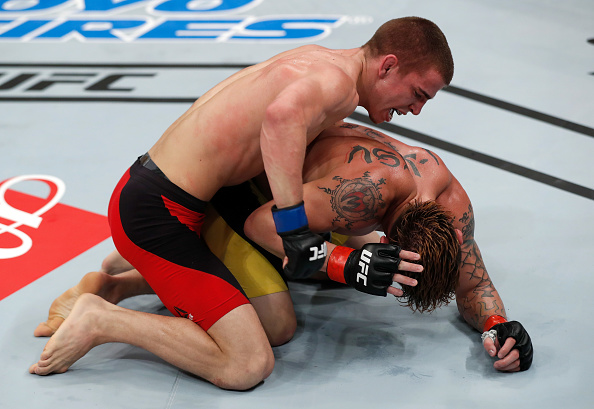 Jason got the crowd into the bout quickly thanks to a hard right to the head that got Kennedy’s attention and a flying knee that dropped the Canadian. Kennedy recovered quickly and soon got a pair of takedowns that allowed him to control the rest of the round with his ground and pound attack.

The flying knee of Jason struck paydirt once again in round two, putting Kennedy on the deck a second time. Jason was able to keep his foe grounded for much of the round, but referee Camila Albuquerque restarted the stalled action with a minute left.

A series of Kennedy takedowns led to a big round for “JBC,” as he was able to keep Jason from getting any offense other than a shoulder lock attempt going, and Kennedy’s ground control was enough to earn him the nod by scores of 29-28 twice and 29-27.

Octagon rookie Paulo Borrachinha made quite the impression in the middleweight opener, stopping South African veteran Garreth McLellan early in the first round.

Borrachinha raced out of his corner as the fight began, throwing punches and kicks, and he didn’t stop until referee Osiris Maia pulled him off at 1:17 of the opening round. McLellan was never in the fight, as Borrachinha never gave him an opportunity to get started, and it was a debut to remember for sure.