Leandro Silva Gets His Big Fight 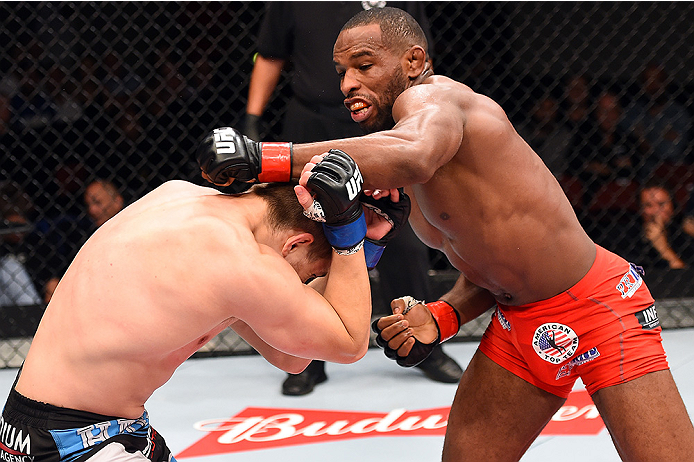 Outside of getting a victory on fight night, there can’t be a better feeling for a mixed martial artist than hitting that point where everything is seemingly coming together at the right time. Leandro Silva, unbeaten in his last three UFC fights, feels he is at that point heading into his Saturday meeting with Efrain Escudero.

“I feel I’m in a special moment where I am joining my technique with my experience, and I’m with people who really see my potential,” he said. “The more and more I show this to the fans, they will see that I have the potential to compete for the title.”

The Escudero fight is Silva’s biggest opportunity to date, a main card bout in Monterrey, Mexico against a well-known former Ultimate Fighter winner. And if he keeps his unbeaten streak going, he has to be knocking on the door of a top 15 ranking in the lightweight division.

Situation wise, it’s a far cry from where the Sao Paulo native was in June of 2013. Owner of an unbeaten record and fresh off a victory over UFC vet Chris Wilson, Silva made his Octagon debut against countryman Ildemar Alcantara, but was shut out over three rounds and released from the promotion.

When you’re one and done, that’s usually not a good sign in terms of making a return to the big show, but Silva was determined.

“I always had faith that I was going to return to the UFC and show my worth to the world,” he said, and in his next five bouts, he went 5-0 with three finishes, earning him a call back to face Francisco Trinaldo in September of 2014. Again, he fell short of victory via decision, but since that bout, he’s defeated Charlie Brenneman and Lewis Gonzalez and had a no contest with Drew Dober when his submission win was overturned due to a bad call by the referee to stop the fight. Long story short, he looks like a different fighter than he was back in 2013.

“The secret of it is training, trusting in my technique and seeking God,” Silva said. “Much has changed, but the main thing was to have people to trust in my work and in my potential.”

A lot of those people reside in Coconut Creek, Florida, home of the American Top Team gym that Silva now calls home. He’s adapted well, saying “Everything has been easy and nice for me,” and as far as the training goes, he believes it’s given a jolt of energy to his career.

“For me, ATT has been very important in my evolution as an athlete and as a person,” he said. “I have several friends on the team. They are technicians, teachers and training partners that help me more and more, and as I give my best I’m evolving all the time.”

The 30-year-old hopes to show off even more of that evolution this weekend against Escudero, who is showing off his best UFC form yet in back-to-back wins over Rodrigo de Lima and Dober. Silva knows he’s in for a fight, but he also believes he wants it more than his opponent.

“Efrain is a great fighter, a former TUF champion, but I find myself much better, and much more hungry for victory and to show my talent to the world.”

He’s got his stage. All he has to do is show up and perform.

“Every fight for me becomes another opportunity to show that I am one of the best in my division,” Silva said, “and to get closer to reaching the end goal, which is the belt. My thought on this fight is to win. And maybe get a bonus.” (Laughs)