Lazaro Thirsty for a KO in Monterrey 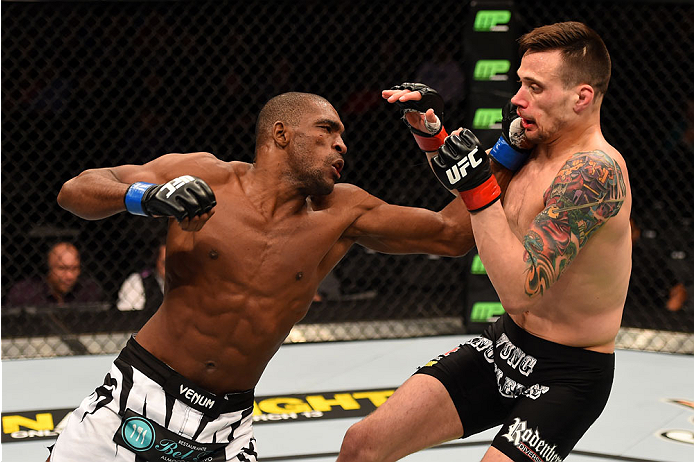 Nine knockouts in 13 pro MMA wins say enough about the striking proficiency of Valmir Lazaro. Yet despite those numbers and a State boxing championship at home in Brazil, the Salvador native opted against a career in the sweet science.

“I never considered it,” Lazaro said. “I fight MMA because I like it and gives me pleasure.”

It also gives his opponents their share of sleepless nights, as the 30-year-old has started to hit his stride, having won 12 of his last 13 bouts, most recently an upset decision victory over James Krause at UFC 184 in February that snuck up on some MMA observers. Lazaro likes that.

“The fact is that some people don´t believe in me and my potential, and that is where I surprise them.”

Unfortunately for “Bidu,” the Krause win may have guaranteed that he won’t sneak up on anyone anymore. This Saturday, he travels to Monterrey, Mexico to face countryman Michel Prazeres. On paper, it’s a tough matchup given Prazeres’ swarming grappling attack, and Lazaro admits that his foe “has a lot of strength.” Add in the fact that Prazeres will be well aware of what his opponent is bringing to the Octagon, and it may be a long night.

Then again, when you’re a member of the Nova Uniao squad in Rio de Janeiro, Andre Pederneiras and company have a way of getting their fighters ready for any situation, and this is no different, especially with several of the team members, including UFC featherweight champion Jose Aldo, getting prepared for big fights at the same time.

“The atmosphere is great and we are having a lot of good training,” said Lazaro, who has come a long way from his early days in the sport, when he started out with a 1-2 record and an uncertain future. Did he ever consider packing it in and turning to something else?

“It already crossed my mind, but I persevered and I like to fight.”

And now he’s getting ready for his third fight in the UFC, one he’s looking to make a statement in.

“Fans should expect an impeccable performance, good striking and a fighter thirsty for a knockout.”