"When I was a kid and I was at the gym, those were countless hours, and if you try to catch up, there’s no way a grown man can spend as much time as I did as a kid at the gym." - Justin Lawrence 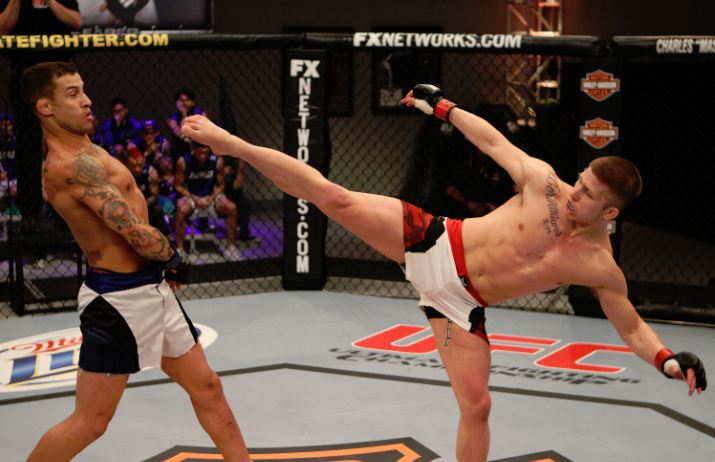 With knockout wins over established veterans James Krause and Cristiano Marcello on the inaugural season of The Ultimate Fighter Live, Justin Lawrence went from being a 22-year old who was virtually unknown in mixed martial arts circles to becoming the favorite to win the show, as well as one of the hottest prospects in the lightweight division.

And while his every move was captured for posterity and to be broadcast to the world through the wonders of reality television, since he was locked away from the world for 13 weeks, he didn’t know how the perception of him was changing by the minute.

“I beat a pretty big name coming in - James Krause was a WEC veteran and he’s had 20 pro fights, and I only had three - so I knew it kinda put me up there, but we were cut off from the outside world and you don’t really know what’s going on,” said Lawrence. “Sometimes from the coaches you kinda got a sense of things, but you never really knew. So I knew I beat a big name, but I wasn’t sure of where I was on that ranking list or if I was a favorite or not.”

He’s probably finding out right about now, as he gets ready for his first post-TUF fight (and UFC debut) against John Cofer on Friday’s TUF Live Finale main card opener. Now he’ll get to see the fuss everyone was making over him, and he’ll get to show what he’s learned since he got eliminated from the competition via third round TKO by eventual finalist Michael Chiesa.

“Chiesa’s a good guy, and I take nothing away from him,” said Lawrence of his lone defeat, albeit one that won’t show up on his permanent record since it was only scheduled for two rounds, making it an exhibition match. “He showed up that night and I didn’t. He really did a good job of forcing a grappling match, and he’s tall and long and that’s exactly what he wants. I tried to outwrestle him, and he took me out of my gameplan because I’m mainly a big striker. I should have tried to keep it on my feet more and I didn’t really follow the gameplan to a T. For me, that’s unusual because usually I’m a huge gameplanner and I follow it to the T and it usually comes out perfect. This was the first time it was different. I got sucked into his game and that was new. I never really had to feel that before. So I definitely learned to not get sucked into the other person’s game during the fight and to focus on my own gameplan.”

And despite the highlight reel knockouts, his kickboxing background (Six-time IKF national kickboxing champion with over 150 amateur bouts), his boxing skill (two-time St. Louis Golden Gloves champ), and training partners (he is a member of the renowned Black House team, home to Anderson Silva), you’ve got to remember that at 22 and with just a handful of MMA fights, he is still a work in progress.

That’s easy to forget when he’s beating fighters like Krause and Marcello, but that’s what comes with such performances and such an impressive resume. It almost reminds you of the anticipation for welterweight Stephen “Wonderboy” Thompson’s entrance into the UFC earlier this year. Thompson and Lawrence both grew up in their father’s gym, had great kickboxing backgrounds, and were giving MMA a shot. Thompson is 1-1 thus far in the Octagon, but with Lawrence at least sporting a high school wrestling background, he will enter the UFC with a few more tools in his belt than his colleague. As for the striking end of things, both have an edge that few can match.

“Three, four, five years ago, striking wasn’t really developed yet,” said Lawrence, a black belt in kempo karate. “There were some good strikers, but a lot of guys were just big brawlers. But every year, the striking ability of fighters keeps evolving with the sport. So with us, and I know Stephen Thompson and his father very well, we know how to mix our hands with our kicks, which is huge. You see a lot of guys in the UFC right now that are great wrestlers, but just brawlers. But when you can get a guy like me, who is really young and kind of that new generation, I’m kind of that hybrid that’s got good standup, good wrestling, and good jiu-jitsu, and that’s the thing for us. Thompson is a world-class striker, where a lot of guys in the UFC aren’t to that level yet. When I was a kid and I was at the gym, those were countless hours, and if you try to catch up, there’s no way a grown man can spend as much time as I did as a kid at the gym.”

Plus, he’s quick to add, “every round you’ve got to start on your feet too.”

Lawrence is undoubtedly jumping into the deep end of the pool here, especially with a cast of killers at 155 pounds in the UFC. But what he learned over 13 weeks in the TUF Live competition had nothing to do with form or technique, though he got plenty of both working with UFC bantamweight champ Dominick Cruz and his team of coaches; what he really got to take home with him to Pacific, Missouri is that it’s not always the most talented fighter who wins. That knowledge of the mental game is something that probably added 10 fights worth of experience, and now he knows what it takes to compete at this level.

“Coming into this house, I knew it would be tough, but I didn’t really think about the mental battle nearly as much as I probably should have,” he admits. “I fought week two against Cristiano Marcello when I was still kinda fresh. I fought week ten against Chiesa, and between those weeks, you’re just tired and beat up and missing home.

“I had over 150 amateur kickboxing fights and my dad (Benny Voyles) was my head coach and always in my corner, so that (not having him in the corner) was something new that I had never done before. Dom (Cruz) and (assistant coach) Eric Del Fierro did a great job of stepping in and filling in his shoes, but it was a mental battle. I’ve got a little brother that’s 15 years old and he wants to try out for The Ultimate Fighter when he becomes 21, and I didn’t know anyone that did the show, so I didn’t know what to expect. But if he does get to try out and he makes it, he will have somebody that has done it and that can kinda guide him through it. And I’ll definitely have to tell him that it’s the mental battle. It’s not necessarily who the best fighter is, it’s the person who shows up on those Friday nights, is mentally strong and blocks everything out, and does well. That’s what it comes down to.”